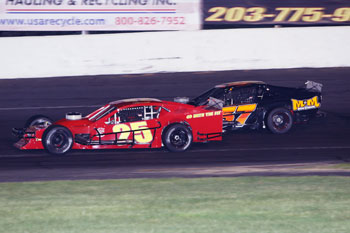 (Stafford Springs, CT)—When the Valenti Modified Racing Series descends upon Stafford Motor Speedway next Friday, May 18 for the VMRS 80, Rowan Pennink will be looking to continue his red hot start to the season. Pennink, the 2013 VMRS Champion, opened the season with a win at Thompson and most recently a VMRS win at Waterford, making him 2 for 3 thus far in 2018 behind the wheel of Gary Casella’s #25 machine.

“You never expect to run like we have but you hope you can,” said Pennink. “We’ve had a really good car at all 3 races so far. Unfortunately at Monadnock we broke a heim joint and we weren’t able to finish the race. All of the guys on the 25 team have been doing a great job bringing a fast car to every race and that makes my job a whole lot easier to drive a fast car. We won last September at Stafford and we won the last race of the season at Waterford in the MTS with the 25 car. If they can bring a car like that to Stafford for me, I think we can have a pretty good Friday night.”

If Pennink is to continue his winning ways, he will have to do so from the back of the pack at Stafford. VMRS rules state that the most recent feature winner will start in the last qualified position for the feature if the driver finishes in a qualified position following his or her heat race, no further back than 18th. But that fact doesn’t seem to faze Pennink at all as he is confident he can race his way to the front no matter where he starts. 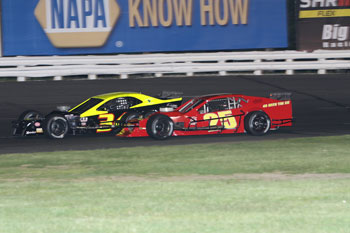 “I actually don’t mind starting at the back, that gives me a chance to run my own race and do my own thing,” said Pennink. “We’ll run at our own pace during the race and try to save as much tire as we can in the heat race. Knowing that we’re starting in the back, we might try a little different strategy throughout the race and it should be fun. There’s really no point to finishing any higher in the heat than we have to since we’re starting in the back. Every time Gary’s team brings the 25 to Stafford, we seem to have a chance to win the race. It hasn’t always worked out that way, we’ve had some rear end failures that have taken us out of race, but if not for that it seems like we’ve always had a chance at winning and hopefully we can do that again.”

In addition to the VMRS 80 next Friday night and the Lincoln Tech 80, scheduled for August 31 at Stafford, Pennink and the #25 team will be coming to Stafford for the June 8 and July 13 Open Modified 80 shows.

“We’re planning on running the 25 car at those 2 open shows,” said Pennink. “Any chance we get to run a Tour style modified at Stafford we will. I’m sure they’re going to be 2 great shows.” 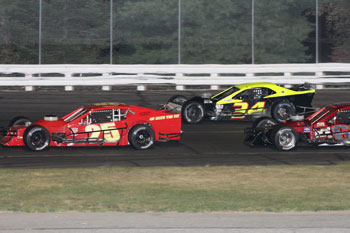 “We had an issue with the engine at the Sizzler and we got that figured out for last Friday night, we just didn’t have the handling quite where we needed it to be,” said Pennink. “We got the engine squared away and if we can get the handing worked out, hopefully we’ll be up front and contending for the win. Keith [Rocco] has been tough to keep up with so far, but things can change awful quickly at Stafford in the SK’s so we’ll see what happens.”