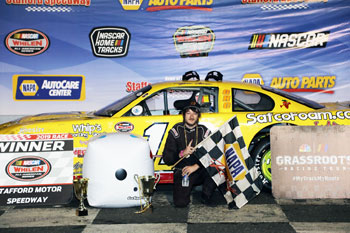 In the 50-lap Late Model feature, Tyler Leary took the lead at the green with Ryan Fearn lined up behind him in second. Fearn took the lead from Leary on lap-2 as the leaders came back to the line with Darrell Keane third, Kevin Gambacorta fourth and Tom Fearn quickly worked his way into fifth utilizing the outside groove. Al Saunders was applying heavy pressure to Tom Fearn for fifth and he nearly made a pass on lap-5 but fell back in line.

Gambacorta slid back to sixth in line as the order on lap-10 was Ryan Fearn, Leary, Keane, Tom Fearn, Adam Gray, and Gambacorta. The caution came out with 12 laps complete as Andy Marchese, R.J. Surdell, and Paul Varricchio, Jr. came together coming out of turn 4.

Ryan Fearn didn’t come up to speed on the restart and he fell from the lead back to third as Leary took the lead and Gray moved into second. Al Saunders was up to fourth behind Ryan Fearn with Michael Wray in fifth. Trace Beyer got around Wray to move into fifth on lap-18 while Leary was starting to stretch out his advantage over Gray and Ryan Fearn.

Ryan Fearn made a move to get around Gray to move into second right at the halfway point of the race on lap-25. Al Saunders was still fourth with Beyer in fifth. Leary’s large lead was erased by the caution flag with 26 laps complete as Keane got into the backstretch wall at the entrance to turn 3.

Ryan Fearn streaked into the lead on the restart, but the caution came out almost immediately as Marchese and Scott Bouley spun in turn 1 to bring the caution back out. Ryan Fearn again took the lead on the restart with Leary in second. Saunders was third with Beyer and Tom Fearn lined up behind him in fifth. The caution came back out with 26 laps complete as Saunders and Beyer spun coming off turn 4 and nearly collected the car of Cliff Saunders, who did a great job to avoid hitting either Saunders or Beyer.

The restart saw a wreck on the backstretch that collected the cars of Gray, DeMone, Keane, Michael Wray, Tom Fearn, Cliff Saunders, and Richard Ciriello to bring the caution back out. This made the restart order Ryan Fearn and Tyler Leary on the front row, Michael Bennett and Gambacorta in the second row, and Dave Wray and David Arute in the third row.

Ryan Fearn took the lead back under green with Bennett in second.   Dave Wray was third with Gambacorta fourth and Michael Wray charged his way into fifth. Michael Wray took fourth from Gambacorta on lap-32 with Tom Fearn and Leary following him through to move into fifth and sixth and drop Gambacorta back to seventh.

With 10 laps to go, Ryan Fearn had a lead of a second and a half over Bennett in second with Dave Wray, Michael Wray, and Tom Fearn still making up the remainder of the top-5. 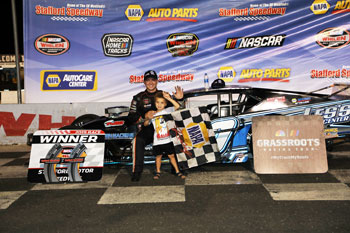 In the 40-lap SK Modified® feature, Tony Membrino, Jr. took the early lead with Dan Wesson and Stephen Kopcik lined up behind him. The caution flew with 3 laps complete as a multicar pileup in the middle of turns 3+4 brought the caution out.

Kopcik took the lead on the restart but DiMatteo went 3-wide with Kopcik and Ronnie Williams on lap-12 to take the lead. Kopcik came right back on lap-13 with a push from Williams to retake the lead. Keith Rocco was now in the mix for the lead as the top-4 cars were side by side two rows deep before the caution came back out with 18 laps complete for a spin by Tyler Jones at the exit of turn 2.

Williams powered his way into the lead back under green with Rocco and Kopcik fighting side by side for second. DiMatteo was fourth in line with Michael Gervais, Jr. up to fifth.   Rocco cleared Kopcik for second on lap-26 and he began to set his sights on Williams in the lead. The caution came back out with 30 laps complete for a spin by Eric Berndt in turn 4 and Andrew Molleur came to a stop against the turn 2 wall.

Williams took the lead back under green while Kopcik and Rocco resumed their side by side duel for second. Rocco got clear of Kopcik on lap-33 and DiMatteo was now side by side with Kopcik for third with Gervais in fifth. Kopcik took third on lap-34 with Gervais pulling alongside DiMatteo for fourth. Up front, Rocco pulled to the outside of Williams on lap-35 and the two leaders were once again side by side. Williams cleared Rocco on lap-37 with Kopcik diving to the inside of Rocco for second. Coming to 2 to go, Rocco was right on Williams’ back bumper. Rocco tried a crossover move but Williams was able to fend off his challenge. The two cars touched going into turn 3 but Williams was able to maintain the lead with Rocco still in second. Rocco made one last bid for the lead in turns 3+4 but Williams took the checkered flag to pick up his second consecutive win and fifth of the 2019 season. Rocco finished second with Kopcik, Gervais, and DiMatteo rounding out the top-5. 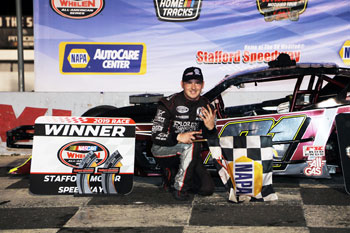 In the 20-lap SK Light feature, Amanda West took the lead at the drop of the green with Chris Matthews in second. The action was fast and furious behind the two front runners as Teddy Hodgdon, Bryan Narducci, and Robert Bloxsom were three-wide for third. Alexander Pearl came through to second with Narducci, Jonathan Puleo, and Hodgdon making up the top-5.

Narducci took the lead from West on lap-9 and with that move West began to slide backwards as Pearl took second, Puleo third and Hodgdon fourth with West finally getting back into line in fifth place.

With 5 laps to go, Narducci, Pearl, Puleo, and Hodgdon were locked in a four car nose to tail train in the fight for the race lead. Hodgdon made a move to the inside of Puleo on lap-17 but Puleo was able to hold him off. Hodgdon tried the move again on lap-18 and this time he was able to make the pass stick and take over third place.

Narducci led Pearl to the checkered flag to pick up his sixth win of the 2019 season. Hodgdon finished third with Puleo and West rounding out the top-5. 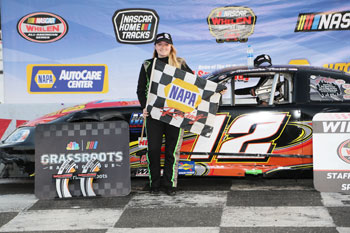 In the 15-lap Limited Late Model feature, the caution came out at the start as Matt Clement got on the brakes to avoid getting into the back of Gary Patnode and spun after contact from Kevin Crosby. Alexandra Fearn took the early lead on the restart with Duane Provost giving chase in second. Patnode was third in line with Jeremy Lavoie fourth and Clement was fifth in line.

Lavoie made a move on lap-8 to get by Patnode for third. Lavoie’s move opened the door for Clement and David Tefft to follow Lavoie by Patnode and drop Patnode back to sixth in line. Provost was still giving chase to Fearn for the race lead while Tefft nearly made a pass on Clement for fourth on lap-12 but settled back into line in fifth.

With 2 laps to go, Provost was right behind Fearn in the fight for the lead. Provost couldn’t get close enough to Fearn to make a move as Fearn took down her third win of the 2019 season. Lavoie finished third with Clement and Tefft rounding out the top-5. 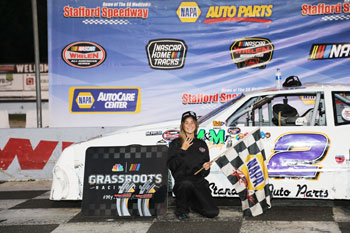 In the 20-lap Street Stock feature, Meghan Fuller took the lead at the drop of the green with Zack Robinson working the outside lane to take second. Adrien Paradis, III slotted into third with Travis Hydar fourth and Tyler Trott and Dave Secore side by side for fifth place.

Hydar took third from Paradis on lap-3 while George Bessette, Jr. got around Secore to move into sixth behind Trott. Bessette took fourth from Trott on lap-4 and he then went by Paradis to take third on lap-5 as Fuller was starting to stretch out her advantage over Robinson at the front of the field. Jason Lafayette took fifth from Paradis on lap-7 and the caution flag came out with 8 laps complete for a spin in the middle of turns 1+2 by Trott. Tim Morse was sent to the rear of the field by NASCAR Officials for making contact with Trott.

Fuller took the lead back under green with Hydar taking second. Bessette and Robinson were side by side for third and Paradis in fifth. Lafayette nearly spun in turn 4 on lap-13 but he was able to gather his car up and remained in sixth. Robinson got clear of Bessette for third and with 2 laps to go, Bessette was glued to the back bumper of Robinson.

Fuller led Hydar to the checkered flag to pick up her second consecutive win of the 2019 season. Robinson finished third with Bessette and Paradis rounding out the top-5.