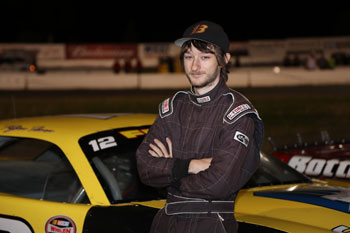 (Stafford Springs, CT)—After contending for the Limited Late Model championship with a career best 6 wins in 2018, Ryan Fearn and the #12 SAFCO Foam team made the move into Stafford Speedway’s Late Model division for the 2019 season. The East Longmeadow, MA native made the most of his rookie campaign by scoring 1 win, 7 top-5 and 12 top-10 finishes to claim the NAPA Auto Parts Rookie of the Year award, the first time Fearn has ever won a rookie of the year award in his racing career.

“It feels pretty great to be the rookie of the year, but it’s not all my own effort,” said Fearn. “I feel like I’ve been improving as a driver over my tenure at Stafford. If it wasn’t for all the guys on the crew and the experience and knowledge they’ve built up since Tom [Fearn] started racing back at Riverside, I wouldn’t have been able to do this. It’s pretty great to have a team effort come together and put up some results like we did this season. I’ve never won a Rookie of the Year award in any other division I’ve raced in so it felt really good to win that award this season.”

The #12 SAFCO Foam Late Model has a strong contingent of support from sponsors and family. Some of the sponsors have been a mainstay for this team dating back to Fearn’s Wild Thing Kart racing years. 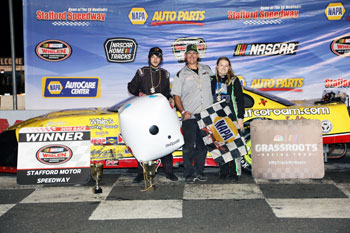 “I really have to thank SAFCO Foam, Whips Sporting Goods, R.A.D. Auto Machine, Williams Race Gears, Grandma Hamm Chassis, special shout out to Joe Hamm because when we got destroyed in the middle of the year, he came home early from a vacation to help get the car back together. Also I would like to thank Dave Ferris, Amedeo, Tom, Soper, John G. Powers, Bob, my sister Alexandra and her boyfriend Grant, N.E. Gear Polishing, N.E. Racing Fuel, Hoosier Tire East, the Arute family, Wizard Auto Body, Short Track Baker and my mom, Jennifer, for giving my father permission to allow me to start racing years ago in the Wild Thing Karts.”

Coming into the 2019 season, Fearn had notched at least one victory in each of his five seasons racing at Stafford. Fearn scored 5 Street Stock wins between the 2013, 2014 and 2016 seasons and he won 7 races from 2017-2018 in the Limited Late Model division. Fearn continued his streak of winning at least one race a season by winning the biggest Late Model race of the season, the 50-lapper on August 16. That win was worth a payday of over $3,100 thanks to a $1,200 purse and selecting the winner takes all option from the $1,900 Gaston Racing Enterprises High Roller Challenge. The victory was extra special to Fearn as he was able to share the winner’s circle with his sister Alexandra, who won the Limited Late Model feature the same night.

“We had 20 opportunities to win a race this year and I knew we had a car that was capable of winning almost every week once we got things figured out and I was surprised our win came in the 50-lapper,” said Fearn. “It was something else to roll into victory lane that night. It was really cool to win on the same night as my sister because it’s been impossible to do that since we’ve been racing in the same division for the last 6 or 7 years. I think the last time we both won on the same night was back in the Wild Thing Karts. It was really cool to be able to relive something like that especially on a Friday night in front of all the race fans who show up every week and I hope they all enjoyed the show that night.”

With his rookie season now in the books, Fearn is anxious to return to Stafford’s Late Model division even stronger than he was in 2019. Fearn has a knack for improving his final points standing finish from year to year. He finished 11th in his first 2 Street Stock seasons then finished 5th before heading into the Limited Late Model division. He finished 9th as a Limited Late Model rookie and improved to 2nd in the standings in his second season. After winning the Late Model extra distance 50-lap race this season, Fearn has his eyes set on winning some regular distance 30-lap events in 2020. 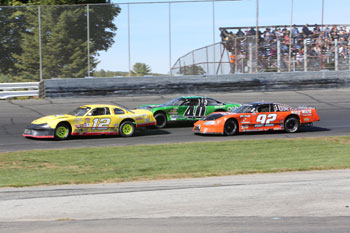 “If I can do what I did this season in 2020, I think we can be pretty strong,” said Fearn. “Maybe next year we can get a regular 30-lap feature win because Tom Fearn has won a million of those races and I’m still looking for my first one. There’s still so much for me to learn and the more I learn next year the better we should be. I’ve got a little more confidence and knowledge of the car and how to race with my competitors. It’s all going to come down to me being smarter and continuing to learn.”

Fearn will officially be crowned the 2019 Late Model NAPA Auto Parts Rookie of the Year at the 50th Annual Stafford Speedway Champion’s Awards Banquet, scheduled for Friday, November 15 at Maneeley’s in South Windsor. Tickets to the awards banquet are $50 and are on sale now. Tickets can be ordered by calling the track at 860-684-2783 or they can be ordered online at www.staffordspeedway.com.