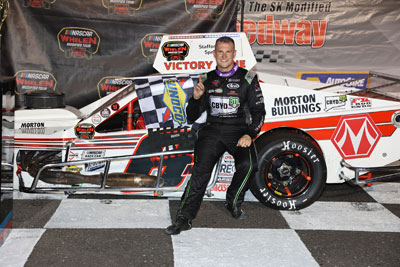 (Stafford Springs, CT)—Stafford Motor Speedway welcomed the NASCAR Whelen Modified Tour to Stafford Speedway for its second of three visits of the 2021 season on Friday, August 6 for the GAF Roofing 150.  NASCAR Cup Series driver Ryan Preece set fast time in qualifying and dominated the race until the first caution flag flew on lap-95.  Preece fell back to seventh after coming to pit road for 2 new tires and he then took a third tire under a later caution and drove back to the front of the field from seventh place to take the lead from Justin Bonsignore on lap-143 and win the GAF Roofing 150.

Ryan Preece led the field to the green flag and took the early lead with Jon McKennedy, Justin Bonsignore, Eric Goodale, and Doug Coby lined up behind him.  By lap-20, Preece was still in the lead but Bonsignore had slid back to fifth as McKennedy was still second followed now by Goodale and Coby in third and fourth.

As the race approached lap-40, Preece was still in command but Goodale was applying heavy pressure to the back bumper of McKennedy in the fight for second.  Goodale looked to have the quicker car, but he couldn’t make a pass on McKennedy despite trying several times to get to the inside of the #7 car.  Bonsignore was still in fifth behind Preece, McKennedy, Goodale, and Coby with Ronnie Williams in sixth, Craig Lutz in seventh, Kyle Bonsignore in eighth, Ron Silk in ninth, and Matt Swanson in tenth.

Coby took second from McKennedy on lap-63 while Preece was still comfortably in the lead.  McKennedy dropped back to third with Goodale still in fourth and Williams up to fifth.  Williams made a move to get around Goodale and move into fourth place on lap-81 and he took third from McKennedy two laps later.  McKennedy would slide back to sixth place over the next several laps as Goodale was now fourth with Craig Lutz in fifth.  The caution flew for the first time with 95 laps complete for debris on the track.

Preece had lapped up to ninth place in the first 95 laps and under the caution the lead lap cars all came to pit road for tires and adjustments.  Preece won the race off pit road followed by Coby, McKennedy, Williams, Justin Bonsignore, Kyle Bonsignore, Lutz, and Goodale.

Preece and Coby led the field back to green with Preece charging back into the lead but Coby drove right up to Preece’s back bumper and nearly made a pass for the lead on lap-102.  Coby was able to get alongside Preece on lap-107 but Preece was still the leader at the line by a nose.  Coby got clear into the lead on lap-108 and his move brought Justin Bonsignore up to second and dropped Preece back to third.  McKennedy was fourth in line with Williams in fifth.  The caution came back out on lap-110 for Swanson, who took a trip through the backstretch grass.  Under the caution, Preece came back to pit road along with McKennedy and Williams and he restarted in seventh.

With 10 laps to go, Preece was right on Justin Bonsignore’s back bumper in the fight for the lead.  Preece got to the inside of Bonsignore on lap-142 and he completed the pass on lap-143 with 7 laps remaining in the race.  McKennedy was still third with Coby in fourth and Silk in fifth.  Preece led Bonsignore to the checkered flag to win the GAF Roofing 150.  McKennedy finished third with Coby and Silk rounding out the top-5.