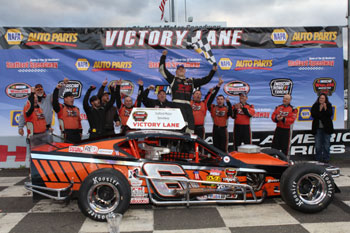 STAFFORD, Conn. — There has been nobody better than Ryan Preece lately when it comes to NASCAR Whelen Modified Tour racing at Stafford Motor Speedway.

For the second straight year, Preece drove the No. 6 TS Haulers Chevrolet to Victory Lane at the track’s NAPA Auto Parts Spring Sizzler 200. It continues a hot streak for the Berlin, Connecticut, driver at the historic half-mile. He’s the first driver to win the Sizzler in back-to-back years since Bobby Santos III in 2013-14.

Bonsignore holds a one-point lead over Dowling, and a five-point advantage over Lutz.

The NASCAR Whelen Modified Tour returns to the track in Massachusetts at Seekonk Speedway on Saturday, June 2..