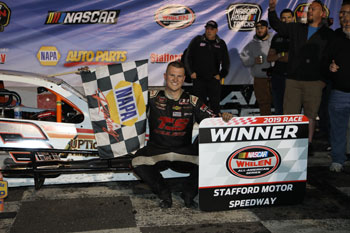 (Stafford Springs, CT)—Stafford Speedway hosted the 2nd Annual Twisted Tea Open Modified 80 with tour style modifieds taking center stage for an 80-lap race around the Connecticut half-mile. NASCAR Monster Energy Cup Series driver Ryan Preece took the checkered flag by driving through the field after being the last of the lead cars to pit for fresh tires during the 80-lap race.

The Twisted Tea Open 80 took the green flag with Matt Galko taking the lead from polesitter Ronnie Williams at the start. Williams’ car was leaking fluid and he was black flagged on lap-3. Chase Dowling took the lead from Galko on lap-5 with Jeff Gallup, Ryan Preece, and Eric Goodale making up the top-5. Todd Owen was quickly up to sixth with Bryan Narducci, Cam McDermott, Michael Gervais, Jr. and Keith Rocco making up the top-10. Preece made a move to the inside of Gallup for third on lap-9 and Gallup slid all the way back to eighth.

With 15 laps complete, Dowling was in the lead with Galko, Preece, Owen, Narducci, McDermott, Goodale, Rocco, Max Zachem, and Gallup making up the top-10. Preece was starting to look to the inside of Galko for second and he was able to make a pass and take second on lap-21. The caution flew with 21 laps complete as Anthony Flannery spun in turn 2.

Preece took the lead from Dowling in the outside lane on the restart with Galko and Owen side by side for third with McDermott in fifth. Owen cleared Galko for third on lap-24 with Rocco and Goodale up to sixth and seventh behind McDermott as Preece continued to hold the lead with Dowling giving chase. Mark Bakaj spun coming out of turn 4 to bring the caution out with 29 laps complete.

The restart saw Dylan Izzo, Walt Sutcliffe, and Bakaj all come together in turn 3 to bring the caution back out before a lap could be completed. The next restart saw McDermott get pinned against the frontstretch wall and came to a stop in turn 1 to bring the caution right back out. Preece powered to the lead on the restart with Dowling, Galko, Goodale, and Williams making up the top-5. Gallup was sixth with Narducci, Rocco, Flannery, and Izzo making up the top-10. Sutcliffe dropped off the pace to bring the caution out with 43 laps complete. Under the caution, Preece stayed out on track while the majority of the lead lap cars behind him all came to pit road for 2 fresh tires and any adjustments.

Preece resumed the race in the lead with Gallup in second. Owen was now third with Savary fourth and Tommy Barrett, Jr. up to fifth. Williams was sixth with Gervais, Narducci, Goodale, and Galko making up the top-10. Gervais spun in turn 2 to bring the caution out with 46 laps complete.

Preece powered into the lead with Barrett taking second. Savary and Izzo both got into the turn 3 wall to bring the caution out with 47 laps complete. Preece came to pit road under the caution to change his 2 tires and rejoined the race at the rear of the field in 15th place for the restart with 33 laps to go.

Barrett was the new leader back under green with Owen and Galko side by side for second. Galko cleared Owen on lap-49 to move into second and now Rocco was on the outside of Owen in a fight for third. Williams was lined up behind Owen in fifth with Flannery back up to sixth after his earlier spin.

With 25 laps to go, Galko was applying heavy pressure to Barrett for the lead with Williams third and Owen fourth. Galko took the lead from Barrett on lap-56 while Preece was a man on a mission after taking his fresh tires. Preece was up to fifth and slowly closing down the gap to the front four cars of Galko, Barrett, Williams, and Owen.

Williams made a move to the inside of Barrett for second on lnap-60 while Preece was now right behind Owen in fifth. Preece got by Owen to move into fourth on lap-61 while Williams finally got clear from Barrett on lap-62 to take second.

Preece went by Barrett to move into third on lap-64 and he went by Williams to move into second place on lap-68. Preece was all over the back bumper of Galko looking high and low for a way to make a pass for the lead when the caution flew with 71 laps complete for a spin by Rocco and another car with 70 laps complete. 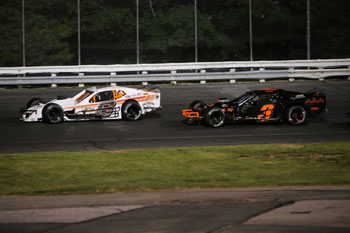 Preece powered his way into to the lead on the outside of Galko on the restart with Williams taking second and dropping Galko back to third. Dowling was fourth with Goodale up to fifth. The caution came back out with 73 laps complete for Dylan Kopec, who had a quick spin in the middle of turns 3+4.

The restart saw Preece pull out to the lead with Dowling looking to get by Williams on the outside but Williams spun to bring the yellow back out before a lap could be completed. Preece again powered into the lead on the restart with Galko coming back up to second. The field completed one lap before the caution came back out for a spin by Flannery at the end of the backstretch, setting up a 6-lap dash to the finish.

Preece took the lead with Goodale coming up to second on the restart. Galko was third with Narducci all over the back bumper of Dowling in a fight for fourth place. Narducci took fourth on lap-77 while Preece was slowly pulling away from Goodale and Galko.

Preece led Goodale to the checkered flag to win the Twisted Tea Open 80. Galko finished third with Narducci and Dowling rounding out the top-5.