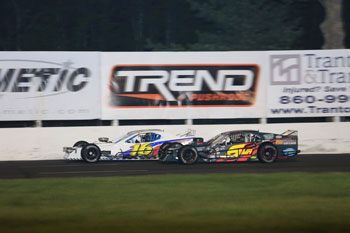 (Stafford Springs, CT)—One year after finishing fifth in the Valenti Modified Racing Series championship race as a 15 year old rookie, Sam Rameau has quickly dispelled any notion of a sophomore slump. The Westminster, MA native and driver of the #6 RaceChoice.com Chevrolet recorded his first VMRS feature event win earlier this season at Lee USA Speedway and he comes into the August 31 Lincoln Tech VMRS 80 at Stafford Speedway sitting second in the points standings.

With Rameau sandwiched in between last year’s VMRS champion Anthony Nocella and former VMRS champion Woody Pitkat in the standings, he will be looking for his first top-10 finish at Stafford to maintain his push to become the 2018 VMRS champion.

“Obviously I’d love to win the race but I’d be real happy with a top-5 finish,” said Rameau. “We’re points racing so any finish we can get in front of Anthony Nocella would be good for us. Two weeks ago we were behind by 58 points and now we’re only 18 points behind so hopefully we can continue on the championship push.”

While he has limited experience with only 4 previous starts at Stafford, Rameau has shown speed but he hasn’t had the best of luck. The VMRS 80 that was held back in May at Stafford was actually the first time that Rameau saw the checkered flag in VMRS competition at the Connecticut half-mile track and he will be looking for another race where he finishes all 80 laps.

“We’re always fast when we come to Stafford, we just haven’t had the best luck there,” said Rameau. “The May race was actually the first race at Stafford that I was able to finish. I had raced 3 times before at Stafford and one race I was running fourth with about 40 laps to go and the transmission broke, one race I was collected in a big pileup on the backstretch, and the other race the motor blew up. I don’t have much experience at Stafford but we’re going to give it our all. Knock on wood we’ve had pretty good luck so far this season and hopefully we can continue that at Stafford.” 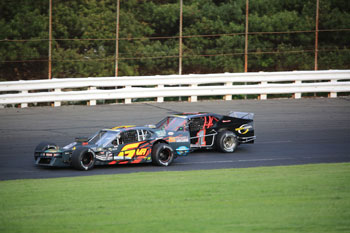 Despite his lack of experience at Stafford compared to the majority of the field, Rameau thinks that with a few breaks going his way, he can win the Lincoln Tech VMRS 80.

“Absolutely I think we can have a winning car,” said Rameau. “I have the best crew behind me by far. My Dad, my crew chief, my car chief, they’re all the best and they push me to do my best on the track. Of course there’s pressure and there’s some added pressure being second in points, but we go to the track every week with a positive attitude and we always give 110%. If we keep on doing our part, the rest will play out for us. As much experience as some of the other drivers have at Stafford, I try to not let that get into my head and intimidate me.”

Tickets for Friday night’s Lincoln Tech VMRS 80 available and on sale now. Tickets are priced at $30.00 for adult general admission tickets, $5.00 for children ages 6-14, and children ages 5 and under are admitted free of charge when accompanied by an adult. Reserved seat tickets are $32.00 for all ages. All ticket prices include 10% CT Admission Tax. Stafford Motor Speedway offers plenty of free parking along with overnight parking available for self contained Recreational Vehicles. Grandstand gates will open at 5:15pm with VMRS qualifying heats starting at 6:30pm and feature events to immediately follow VMRS qualifying.