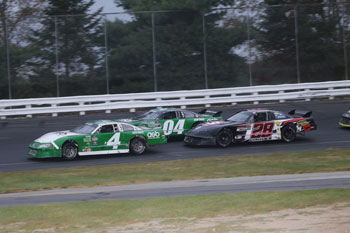 “We were going to make the move for the 2017 season, but we both wrecked at the Fall Final in 2016 and with having to fix the cars along with changing divisions was going to be too much,” said Al Saunders. “We ended this past season good so we’re making the move now.”

The Saunders twins will once again continue a hometown theme in 2018 with sponsorship from American Sleeve Bearing in Stafford, which is also where both twins are employed. 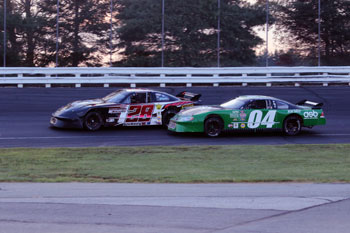 “Our sponsor, American Sleeve Bearing, has been asking us for a couple years now if we wanted to move up to the Late Model division and they’ll be back on the cars again this season,” explained Cliff. “ASB and Howard Buckland have sponsored us since we got started and we’re happy to be able to continue our partnership with ASB. They’ve been on board with us since we started racing at Stafford and knowing that they’re back with us each season keeps us from having to go out and search for sponsors during the off-season. Also, they’ve been great working with us so that we can get our hours in earlier in the week so we can take off early on Fridays to get to the track.”

In addition to both twins having a track championship to their name, they are also both familiar with Stafford’s NAPA Victory Lane, with Al having racked up 20 career wins (12 Limited Late Model, 8 Street Stock) and Cliff has 17 wins (8 Limited Late Model, 9 Street Stock). Despite their successes, both Saunders twins know they face an uphill climb in learning a totally brand new car.

“We know that things are going to be a lot harder than they look in the Late Models,” said the Saunders twins. “Maybe towards the end of the season we can start to be a contender for race wins, we’ll see how things go for us. One of the biggest challenges for us will be to get the car perfect every week with the setup and trying to not make any mistakes.” 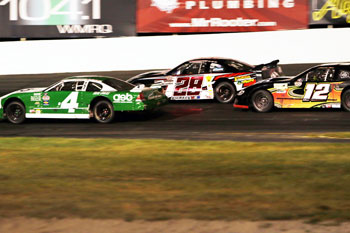 One area where the Saunders boys will struggle is a lack of experience compared to some of Stafford’s Late Model teams that have been around for years and have a wealth of experience already built up. That’s where the twins will lean on their crew chief and car owner Barry Fluckiger, who has helped Corey Hutchings and several others to reach NAPA Victory Lane in the Late Model division.

“The Late Model division has a lot of guys who have been racing a long time with a lot of experience with good cars and if we’re off just a little bit, we’re going to be pretty far behind those guys on the track,” said the Saunders twins. “Working with Barry will help make things easier for us. When we first made the move from Street Stocks to Limited Late Model, Barry really helped make the car better after a couple of races and he’s won Late Model races with a couple of different drivers in the past, so working with him will be a big plus for us. We’re not really sure what to expect because we’ve never driven a Late Model car before. Those first couple of practice sessions are going to be real important for us to get a baseline to work with for the season.”

With the brothers both making the move into the Late Model division at the same time, they will be directly competing with each other for NAPA Rookie of the Year honors. While one might think that things could get heated between drivers who are also brothers, the twins say that is the furthest thing from the truth. 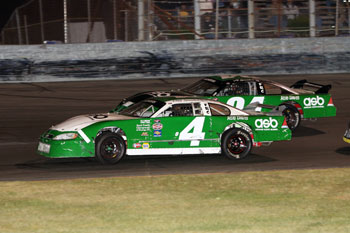 “I think we’ll be fine, we’re both out there to beat everyone else and not focus on each other,” said the twins. “If we can do something to help each other beat everyone else, that makes a lot more sense for us than racing each other. So far we’ve never both had a good season in the same year. The way it’s gone is one of us is good but not really consistent and the other is consistent but not really that good. Usually one car would be up in the top-3 of the standings and the other car would be around 6th in the standings. We’ve never really battled each other in the points so that could be something new for us this season.”

Al & Cliff Saunders along with the rest of the Late Model division will get their first taste of action in 2018 during the 47th Annual NAPA Auto Parts Spring Sizzler® on April 27-29. The NAPA Spring Sizzler® gets underway Friday, April 27 with a practice session for Stafford’s weekly divisions, Mr. Rooter Trucks, and Vintage All-Star cars. The practice session will be open to the public at no charge. Action continues on Saturday, April 28 with Coors Light Pole Qualifying for the Whelen Modified Tour cars, along with heat and consolation races. Saturday will wrap up with feature events for the Limited Late Model, DARE Stock, Mr. Rooter Trucks, and Vintage All-Stars. NAPA Spring Sizzler action continues on Sunday, April 29 with the NAPA Auto Parts Pit Party from 11am-12noon followed by Stafford’s SK Modifieds®, Late Models, and SK Lights joining the Whelen Modified Tour in feature action.

Tickets for the “Greatest Race in the History of Spring” are on sale now at the Speedway Box Office. Tickets are priced at $40.00 for adult general admission tickets, $5.00 for children ages 6-14, and children ages 5 and under are admitted free of charge when accompanied by an adult. Reserved seating is priced at $42.00 for all ages. All ticket prices include 10% CT Admission Tax. Discount tickets will be available in March at participating NAPA Auto Parts Stores.