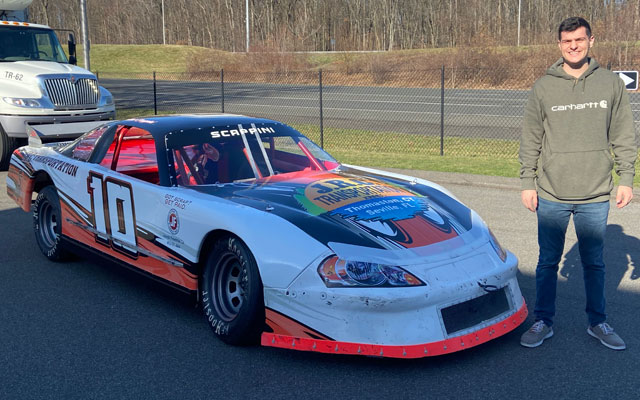 (Stafford Springs, CT)—When the Limited Late Model field takes to the track at Stafford Speedway in 3 weeks, 23 year old Matt Scappini will kick off his first season of weekly competition at the Connecticut half-mile facility.  The Litchfield, CT native has a limited racing background having raced snowmobiles and go karts, but the 2021 season will mark his first time behind the wheel of a full sized racecar.  Scappini and his family purchased the former #43 car that Andrew Durand drove to the track championship last season and have transformed it into the #10 JRC Transportation Chevrolet that Scappini hopes will help carry him to Rookie of the Year honors.

“I’m super excited,” said Scappini.  “It’s a cool new opportunity for me and it gives me a chance to show what I can do and have some fun.  There’s a little bit of nerves, but I’m very excited.  My end goal for this season is to win Rookie of the Year.  For the first couple of races, I’d like to get a feel for the car, see what it can do, and see where I’m at.  After that I can reassess my goals but I want to get comfortable in the car and make smart decisions on the track and bring the car back in one piece.  The first couple weeks are going to be very important for me to gauge where I’m at and see where I need to improve.  Also I have to learn the experience of being a driver at Stafford versus being a spectator.” 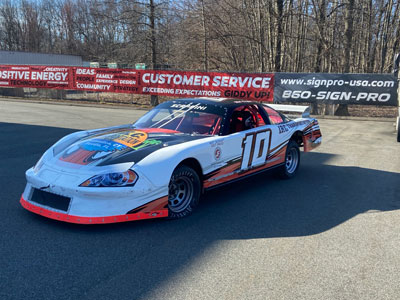 Scappini has been busy in the off-season preparing for his rookie campaign by watching YouTube videos as well as making as many virtual laps around Stafford as he can in the world of iRacing.  Scappini has also been soliciting advice from both Durand as well as Joe Hamm.

“I’ve watched every possible YouTube video that I can and I’ve been doing a little iRacing to get used to the track,” said Scappini.  “I’ve been to Stafford to watch the races and I’ve been studying for months now.  I’ve also been talking with Andrew Durand and Joe Hamm and they’ve been nothing but helpful throughout this entire process.  Without them I don’t know where we’d be with the car.  Joe is like a racecar wizard and any questions or issues that we’ve run into both Andrew and Joe have been very helpful.”

With no prior experience to help ease his learning curve for the 2021 season, Scappini has his focus squarely on winning Rookie of the Year rather than thinking about points or being a championship contender.

“At this point I haven’t really thought about points,” said Scappini.  “Being a rookie driver, I’m not even considering racing for the championship, I’m more focused on getting experience and winning the Rookie of the Year.”

That being said, it hasn’t stopped Scappini from dreaming about putting his #10 JRC Transportation Chevrolet in NAPA Victory Lane during his rookie season. 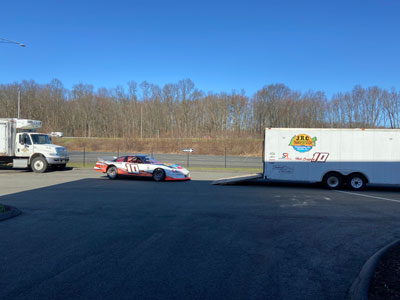 “Winning a race is a thought that’s been in my head,” said Scappini.  “I’m not going to lie, I’ve dreamed about winning a race a couple of times already and it would certainly be amazing if we can get a win this year.  The equipment is good so it’s all going to come down to me.  I have to thank my father for helping me out and putting this deal together, Andrew Durand and Joe Hamm for all their help, and JRC Transportation and Ray Capella for sponsoring us, and Joseph Freedman for sponsoring us.  Those are the key pieces for our team and we’ve been able to do a lot.”

The 2021 Limited Late Model season kicks off on Saturday, April 24 as part of NAPA Auto Parts Opening Day festivities.  Feature action at Stafford continues on Sunday, April 25 with the 49th Annual NAPA Spring Sizzler featuring the Whelen Modified Tour.  General Admission tickets for the April 24 NAPA Auto Parts Opening Day are now available online at StaffordSpeedway.com/tickets. Tickets for the April 25 NAPA Spring Sizzler have sold to capacity limits but fans can sign up for ticket alerts if more tickets should become available at https://bit.ly/39fOoTY.  Stafford Speedway remains under reduced capacity per order of the State of CT due to Covid-19 restrictions.  Fans are encouraged to purchase tickets as soon as possible to ensure a ticket to the event. Paddock passes will become available online two weeks prior to the event.