(Stafford Springs, CT)—Stafford Speedway returned to NASCAR Whelen All-American Series racing action on September 11 with the TC 13 Shootout joining Stafford’s five weekly divisions in feature action.  The SK Modified® division ran their regularly scheduled 40-lap feature as well as the 3rd Annual TC 13 Shootout, a 13 lap race contested between the top-13 finishers from the 40-lap feature that paid the winner an extra $1,313 from a purse of over $7,000.  Todd Owen not only won the 40-lap SK Modified® feature, he also won the TC 13 Shootout, giving him a total payday of over $3,000 for the night.  Other weekly feature winners were Adam Gray in the Late Model feature, Jonathan Puleo in the SK Light feature, Alexandra Fearn in the Limited Late Model feature, and Zack Robinson in the Street Stock feature. 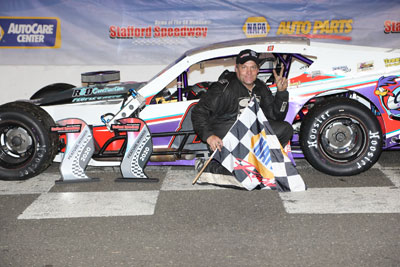 In the 40-lap SK Modified® feature event, Marcello Rufrano took the lead at the green with David Arute applying heavy pressure.  Michael Christopher, Jr. got by Arute to take second on lap-2 just before Dan Avery brought the caution out when his car came to a stop at the entrance of turn 3.

Rufrano took the lead on the restart with Christopher and Cory DiMatteo side by side for second.  DiMatteo got clear into second on lap-4 and Todd Owen came up to third to drop Christopher back to fourth.  Keith Rocco went to the outside of Arute to take fifth on lap-5.  Owen made a move to the inside of DiMatteo for second on lap-6 and the two cars were still side by side when the caution came back out for a multi-car incident in turn 2 involving Teddy Hodgdon, Jeff Malave, John Catania, Tyler Hines, Glen Reen, and several other cars.

Rufrano took the lead back under green with Christopher right behind him in second.  DiMatteo and Owen were side by side for third with Arute in fifth, Ronnie Williams in sixth, and Rocco in seventh.  Christopher took to the outside lane and he made a move around Rufrano on lap-12 to take over the race lead.  Owen was right behind Christopher and he took second on lap-13 and made a move to the inside of Christopher for the lead.  Christopher came right back on lap-14 and nearly retook the lead but Owen was able to hold him off.  Rufrano was third in line behind Owen and Christopher with DiMatteo fourth, Williams fifth, Arute sixth, and Rocco seventh.

At the halfway point of the race Owen was in the lead followed by Christopher, Rufrano, DiMatteo, Williams, Arute, and Rocco.  Owen was starting to stretch out his advantage over Christopher and the rest of the field and with 10 laps to go he was in front by 1.5 seconds.  Rocco got around Arute on lap-35 to move into seventh as Arute drifted up the track in turn 3 but the order out front was still Owen, Christopher, Rufrano, DiMatteo, and Williams.

Owen led the field to the checkered flag to pick up his second win of the 2020 season after two weeks of bad luck on the track.  Christopher finished second with Rufrano, DiMatteo, and Williams rounding out the top-5. 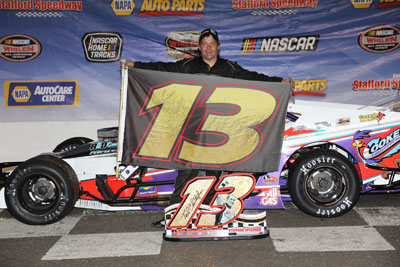 Owen went back to the front on lap-7 after he and Talman touched coming off turn 4 on lap-6.  Christopher was third in line with Arute in fourth and Stephen Kopcik fifth.  Kopcik got around Arute to move into fourth on lap-9 while Owen was inching away from Talman and Christopher at the front of the pack.

Owen led Talman to the checkered flag to take the $1,313 winner’s check and score two wins in the same night.  Talman finished second with Christopher, Kopcik, and Arute rounding out the top-5. 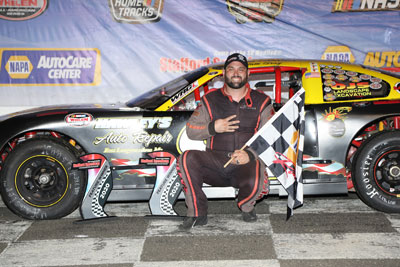 In the 30-lap Late Model feature event, Rick Lanagan and Marc Curtis went side by side for the lead at the drop of the green and they were still side by side on lap-3.  Just behind them John Blake and Duane Provost were side by side for third with Wayne Coury, Jr. in fifth.  Curtis slid back to fifth on lap-5 as Blake took second, Coury third, and Al Saunders fourth with Lanagan out in front.

Coury worked his way around Curtis and on lap-10 he was applying heavy pressure to the back bumper of Lanagan in a fight for the lead.  Saunders was now in third with Blake fourth and Adam Gray was up to fifth with Tom Fearn and Michael Bennett right behind him.  Paul Varricchio, Jr. brought the caution out with 16 laps complete as he came to a stop coming out of turn 4 with a flat tire.

Saunders went 3-wide with Coury and Lanagan on the restart and he took over the race lead in turns 3+4.  Gray took second with Bennett up to third before Lanagan got into the backstretch wall and brought the yellow back out with 17 laps complete.

Gray took the lead from Saunders in the outside lane on the restart with Coury third, Tom Fearn fourth, and Bennett fifth.  Coury powered his way by Saunders to take second with a pass in turn 3 on lap-20.  Tom Fearn and Bennett followed suit on lap-21 to move into third and fourth and drop Saunders back to fifth as Gray stretched out his lead with all the position swapping going on behind him.

Gray led the field to the checkered flag to pick up his fourth win of the 2020 season.  Coury finished second with Tom Fearn, Bennett, and Saunders rounding out the top-5. 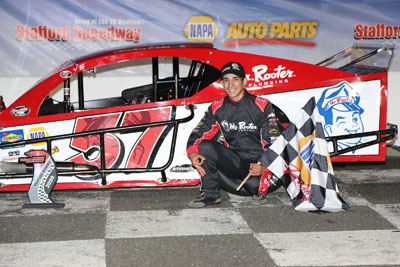 Tyler Chapman took the lead on the start with Jonathan Puleo quickly coming up to second.  George Bessette, Jr. was third in line followed by Bob Charland and Amanda West.  Bessette took second from Puleo on lap-3 and Charland and Puleo were side by side for fourth with West in fifth as Chapman continued to lead the race.

Charland took third on lap-6 with Chapman and Bessette still out front and Puleo and West behind him.  Brian Sullivan took fifth from West on lap-7 while Puleo was now on the outside of Charland looking to take over third place.  Charland fell back into line in fourth and then lost fourth to Sullivan on lap-10.  Puleo was looking to the outside of Bessette on lap-12 for second and he completed the pass at the line.  Sullivan was now working the outside lane against Bessette for third and he took third on lap-14.  Up front Puleo made a move to get around Chapman and take over the race lead.  With 5 laps to go, the order was Puleo, Chapman, Sullivan, Bessette, and Charland.

Puleo led the field to the checkered flag for his second win of the 2020 season.  Chapman finished second with Bessette, Sullivan, and Charland rounding out the top-5. 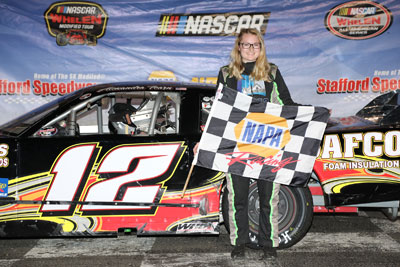 In the 20-lap Limited Late Model feature event, the race started with a bang as Jay Clement spun and points leader Andrew Durand made hard contact with the backstretch wall to bring the caution out before a lap could be completed.

Matt Clement took the lead from Lucas Leone on the restart with Jeremy Lavoie in third.  Gary Patnode spun on the frontstretch to bring the caution out with 1 lap complete.

Clement took the lead back under green with Leone and Alexandra Fearn right behind him.  Fearn took second from Leone on lap-3 with Lavoie in fourth and Patnode was fifth in line.

Fearn made a move to take the lead from Clement on lap-7 with a pass in turns 3+4.  Lavoie took to the outside lane on lap-8 to get around Leone and take over third place while Patnode continued to run in fifth place.  Leone came back to the inside of Lavoie and they were side by side for third on lap-14 while Fearn was slowly pulling away from Clement in the fight for the lead.

Fearn led Clement to the checkered flag to pick up her second win of the 2020 season.  Leone finished third with Lavoie and Patnode rounding out the top-5. 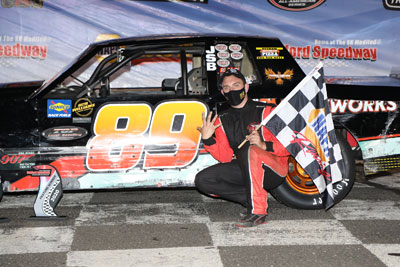 In the 20-lap Street Stock feature event, George Yuska took the lead at the drop of the green flag and began to set the pace with Brandon Michael, Zack Robinson, Jason Lafayette, and Frank L’Etoile, Jr. lined up behind him.  Michael charged his way into the lead on lap-4 and his move opened the door for Robinson to follow him by into second which dropped Yuska back to third in line.  Robinson took the lead from Michael on lap-5 while Lafayette was now third followed by L’Etoile and Yuska, who was starting to fade backwards.

Lafayette made a strong move to the inside of Michael on lap-8 and he took second on lap-9.  L’Etoile followed him by Michael to take third and drop Michael back to fourth as Robinson continued to hold the race lead.  Travis Hydar was up to fifth as Yuska had fallen back to ninth in line.  The caution came out with 12 laps complete for Christopher Phelps, who spun in turn 2.

Robinson took the lead back under green with Lafayette and L’Etoile going side by side for second.  Lafayette took second on lap-14 with Michael in fourth and Hydar in fifth.  Chris Meyer, the winner of the last 2 Street Stock races, was up to sixth.  Hydar got around Michael to move into fourth place on lap-17 while Lafayette and L’Etoile were still trying to close down the gap to Robinson for the race lead.

Hydar made a move to get by L’Etoile for third on the final lap of the race but it was all Robinson at the front as he scored his fourth win of the 2020 season.  Lafayette finished second with Hydar, L’Etoile, and Michael rounding out the top-5.