(Stafford Springs, CT)—As the premier division at Stafford Speedway, the race for the SK Modified® championship is usually what grabs headlines. But the race for the NAPA Auto Parts Rookie of the Year in the SK Modified® division has quietly produced the tightest battle of the 2018 season to date in any of Stafford’s five Whelen All-American Series divisions. Through the first 8 races of the season, there is a three-way tie between Matt Vassar, Dan Wesson, and David Arute. 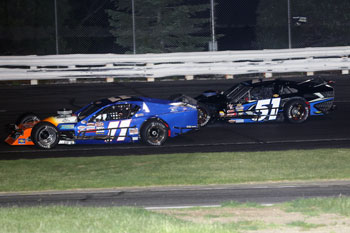 While Arute and Wesson come to the SK Modified® ranks with experience in the SK Light division, Vassar comes from a background in Late Model cars. The season started out promising for Vassar with a 7th place finish in the season opening NAPA Spring Sizzler feature but his best finish since then has been a 12th place run on May 11th. Vassar says that the #11 Hummel Brothers Hot Dogs team has been improving every week and they have their sights set squarely on winning the NAPA R.O.Y. award and the $1,000 bonus that goes along with it.

“I would say the season has been good and bad,” said Vassar. “We’ve had some promising runs and some runs that should have been better. I think the biggest thing for me is getting used to how much side bite these cars have and finding a balance that I’m looking for. I think we’re night and day better than we were at the Sizzler but we’re not where we want to be with the car yet. We’re improving the car every time we go out on the track and I don’t see any reason why by the end of the year if we’re not at least a contender for wins, we can be a top-5 car. We’d like to get into the top-10 in the points at the end of the season and win that Rookie of the Year award. Rookie of the Year was one of our main goals at the beginning of the season and we check the rookie standings every week. It’s going to be a tough battle right down to the end of the season. We’re all battling hard and it’s going to be fun to see who comes out on top at the end of the year.” 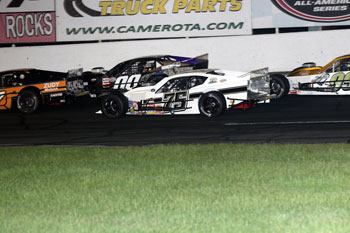 Arute made the move to the SK Modified® division after scoring 2 wins and 2 top-5 finishes in the points standings in his 2 full seasons of SK Light racing. Despite his success in the SK Light ranks, he has found the world of SK Modified® racing to be a tougher battle with his #75 Big Haus USA Racing Products Chevrolet. Arute’s season started off with just about the worst possible circumstances as his motor blew during the NAPA Spring Sizzler feature event. Arute has been trying to dig himself out of the hole that the blown engine created and he is still looking for the first top-10 finish of his rookie campaign.

“It’s definitely a big difference between SK Lights and SK Modifieds®,” said Arute. “The competition in the SK Modifieds® is second to none. Every race is all out, up on the wheel for every lap. We have had a tough start, with a blown motor at the Sizzler, which hasn’t helped with handicapping. Even with a good qualifying run I’m still starting just outside the top 15. In order to win Rookie honors it’s important to be on your game every week. Seeing that 3 of the rookies are tied in points, the NAPA Rookie of the Year chase looks like it’s going to be a heated battle right down to the final race.” 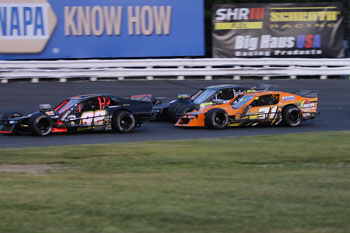 Wesson also moved to the SK Modified® ranks this season having enjoyed a large amount of success in the SK Light division. In 3 seasons, Wesson racked up 10 wins and he was the runner up in the championship standings in 2017. Just like Arute, despite his SK Light success, he has yet to enjoy the same kind of success during his rookie season. Wesson has 1 top-10 finish this season with his #92 Competitive Edge Coatings machine, an 8th place run on May 25th in the first 8 races of the season.

“The transition has been hard,” said Wesson. “I think I’m learning pretty quickly how the car feels and we’re making a lot of adjustments week to week to make the car faster because the competition is a lot harder. Probably everyone in the field could win a race on any given night. Our goal has been to finish races, we haven’t focused yet on getting a top-10 or top-5 finish. We’ve tried a lot of different things and gone way out of our comfort box and some things have worked and some have not worked. Sometimes the car is really loose and other times it’s wicked tight pushing up into the wall so we have to find a happy medium and I think it’s just a matter of time before we finally get to that spot. I’d like to get a top-5 or a good, solid top-10 finish under our belts before the season ends.”

With all three drivers having won races at Stafford prior to moving into the SK Modified® division this season, the race for the NAPA Auto Parts Rookie of the Year title is sure to be an exciting and thrilling duel right down to the last race of the season, the NAPA Fall Final on Sept. 29-30.