The 2020 season kicks off April 24th, 25th, and 26th with the 49th running of the NAPA Auto Parts Spring Sizzler®. The weekend will kick-off Friday, April 24th with practice and will continue Saturday, April 25th with qualifying for all divisions as well as feature racing for the Street Stocks, Limited Late Models, and Vintage All-Star series. The 49th running of the “Greatest Race in the History of Spring”, the NAPA Auto Parts Spring Sizzler®, is set to be held Sunday, April 26th with 200 laps for the NASCAR Whelen Modified Tour. Stafford’s star studded SK Modified® division, Late Models, and SK Light Modifieds will also be on hand Sunday for feature racing.

Super Late Model racing will return to the half-mile Friday, May 29th as an exciting new addition to the 2020 schedule. The event will feature a similar format to the Open Modified 80 events Stafford has hosted for the last 2 seasons. Ted Christopher won the last Super Late Model race held at Stafford Speedway in August of 2012.

“Fans and drivers have been asking us to do a Super Late Model show for a few years now,” explained Stafford General Manager David Arute. “We spoke to some race teams and are working on putting together a program that will showcase the Super Late Model talent in the region.” 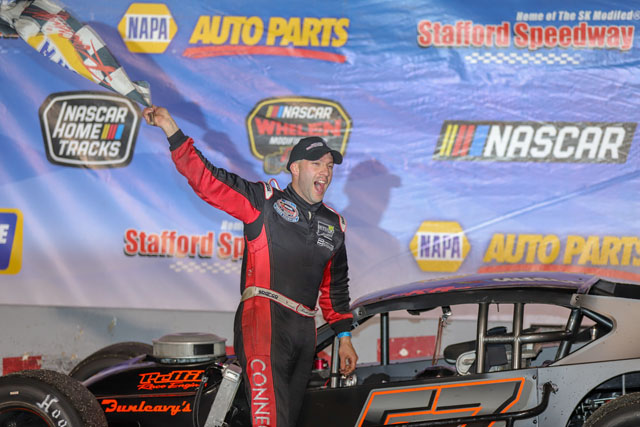 Open Modified racing returns to Stafford with their first event of the season on Friday, May 15th. The May 2019 edition of the Open Modified 80 saw Keith Rocco win a thriller over Todd Owen, Matt Galko, Eric Goodale, and Chase Dowling. All 5 drivers are expected to return to the event in 2020.

“We’re opening the 2020 season with a busy month of May,” explained Stafford V.P. Lisa Arute. “We come out of the gate with 2 weekly shows including one of my favorite events, Kids Night and go into the second half of the month with an Open Modified and Open Super Late Model event. The schedule diversity provides race fans a taste of what’s to come in the summer months.”

The action packed month of May kicks off Friday, May 1st under the lights with opening night for Stafford’s 5 NASCAR Weekly Racing divisions. Stafford’s 5 divisions will headline 2 additional events in the month of May including May 8th and May 22nd. Friday, May 8th will also mark the return of Kids Night with plenty of action for the kids on the midway and big-wheel racing on track. Same as in 2019 all kids 14 & under will be admitted free of charge to all 2020 kids night events. Kids will also be admitted free of charge throughout the month of May for the 28th season of Youth Organization Month.