(Stafford Springs, CT)—This Friday night, October 1, will see Stafford Speedway crown its five 2021 track champions as part of NAPA Auto Parts Championship Night.  Todd Owen and the #81 Cooker Construction team have clinched the 2021 SK Modified® track title as they head into NAPA Championship Night.  The track titles in Stafford’s other four weekly divisions are up for grabs this Friday night with two ultra tight races in the Late Model and SK Light divisions.  Here is a look at the scenarios that each championship contender will need in their favor in order to become a 2021 track champion. 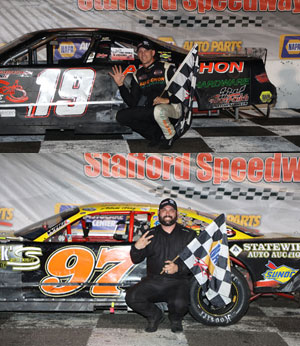 The race for the Late Model title will come down to a pair of former Late Model champions.  Going into NAPA Championship Night, 2015 Late Model champion Michael Bennett and the #19 Aubuchon Hardware team leads 3-time (2013, 2014, 2020) and defending champion Adam Gray and the #97 Meadows Motor Car team by 4 points, or 2 positions on the track.  For Bennett to clinch his second career track title, he will need to finish no less than 2 positions behind Gray as he holds the tiebreaker over Gray with 5 victories to Gray’s 2 wins going into the final race.  For Gray to become a back to back track champion for the second time in his career, he will need to finish at least 3 positions in front of Bennett.  Any finish besides that will make Bennett the champion. 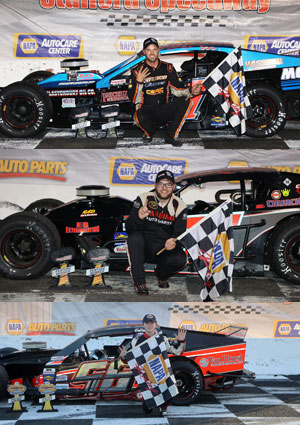 Stafford’s SK Light championship race sees the tightest race out of Stafford’s five weekly divisions.  Going into NAPA Championship Night, defending SK Light champion Brian Sullivan and the #11 Monaco Ford team are tied with Alexander Pearl and the #7 Darling Auto Parts team at the top of the standings with Derek Debbis and the #56 Donna May Fisheries team sitting only 2 points, or 1 position on the track behind.  For Sullivan and Pearl, they simply must finish in front of the other driver as well as Debbis in order to become champion.  For Debbis to claim the championship, he must either finish in front of Sullivan and Pearl, or since he holds the tiebreaker over both Sullivan and Pearl with 7 feature wins this season to Sullivan’s 4 wins and Pearl’s 1 win, he can afford to finish one position behind either Sullivan or Pearl as long as he finishes in front of the other championship contender. 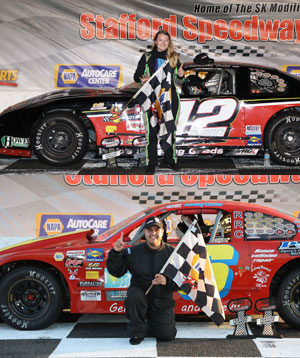 The Limited Late Model division sees Alexandra Fearn and the #12 Broad Brook Brewing / SAFCO Foam team enter NAPA Championship Night with a 32 point advantage over Jeremy Lavoie and the #6 L & S Equipment team.  With the 32 point margin equaling 16 positions on the track, Fearn should just need to take the green flag.  Lavoie would need to finish 17 positions in front of Fearn in order to win his third career championship.  Lavoie has been ultra consistent this season, finishing all 19 races in the top-5 and while Fearn has one less top-5 finish, she has a sizeable advantage over Lavoie in the feature wins department with 6 wins to Lavoie’s 1 win, which is the main reason why Fearn enjoys a 32 point lead.  Should Fearn win the championship, she will join Shelly Perry, who won the SK Light championship in 2006, as the only female track champions in Stafford Speedway’s long and storied history. 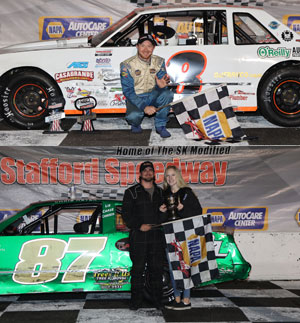 The Street Stock division heads into NAPA Championship Night with the #8 O’Reilly Auto Parts team of Frank L’Etoile, Jr. holding a 20 point lead, or 10 positions on the track, over Chris Meyer and the #87 D and L Services team.  L’Etoile and Meyer both head into NAPA Championship Night with 5 wins each while L’Etoile holds the advantage over Meyer in second place finishes by a 7-4 margin.  That means if Meyer wins the race, L’Etoile must be no more than 9 positions behind to win the championship.  If Meyer does not win the race, then L’Etoile can finish no more than 10 positions behind Meyer and still claim the championship.  Conversely, Meyer must be at least 10 positions in front of L’Etoile if he wins the race and 11 positions in front of L’Etoile if he does not win the race in order to lay claim to the title. 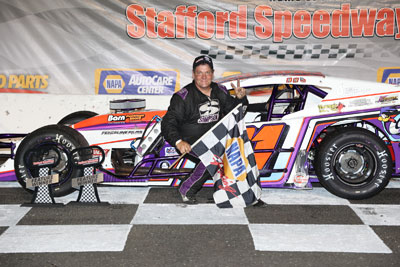 Todd Owen and the #81 team wrapped up the SK Modified® championship last Friday night thanks to their third victory of the 2021 season, which led to Owen holding an insurmountable 52 point advantage.  With a maximum of 50 points on offer for a win, Owen cannot be caught and he will be able to race without worry this Friday night as he puts the finishing touch on an incredibly consistent 2021 season.  In 19 races this season, Owen has recorded 3 wins, 15 top-15, and 18 top-10 finishes.  The one race that Owen didn’t finish in the top-10 was an 11th place finish back on June 11.  Owen’s consistency has resulted in his first Stafford championship after finishing as the SK Modified® runner up in 2004, 2005, and 2019 as well as finishing as the runner up in the 2000 ProStock standings.

Tickets for NAPA Championship Night are available now online at StaffordSpeedway.com/tickets and tickets will also be available for purchase at the admission gates.  Tickets are priced at $20.00 for adults, $5.00 for kids 6-14, and free for kids 5 & under.  Reserved seating is priced at $25.00 for all ages and pit passes are $35.00 with a valid 2021 Stafford Competition License and $40.00 without a Stafford license.  If you are unable to attend in person, tune into the live stream on FloRacing, the official streaming partner of Stafford Speedway.