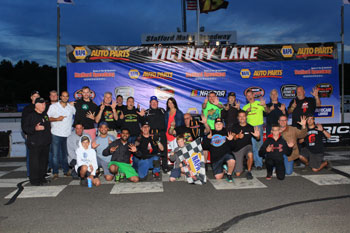 (Stafford Springs, CT)—For the last 10 years Tom Fearn has been a mainstay of the Stafford Speedway Late Model division. Fearn and the #92 team have been on an impressive streak thus far in 2018, scoring 6 consecutive wins through the first 9 races of the season. Following Fearn’s 6th consecutive win last Friday, Mark Arute, Stafford Speedway’s General Manager, announced a $500 bounty to be paid to any team that can beat Fearn starting Friday, June 29th. The bounty pushes the winner’s share of the Late Model purse to $1,450 after contingency bonuses from iRacing.com and New England Race Fuels.

“We’re putting a $500 bounty on Tom Fearn and the #92 team,” explained Stafford Speedway General Manager Mark Arute. “Tommy has been racing at Stafford for almost 30 years, it’s no surprise they are streaking like they are. Tommy and Stu [Fearn] are one heck of a driver/crew chief combination, but its time for another team to step up and knock the #92 out of victory lane.”

Fearn, who started his career at Riverside Park Speedway in the late 80’s, has been competing at Stafford Speedway for nearly 30 years and sits 4th on the all-time win list with 60 career wins. So far in 2018 only 3 drivers have been able to beat the #92 team including Glen Reen, Michael Wray, and rookie Darrell Keane. All three made it to victory lane before the Fearn 6-race winning streak began. 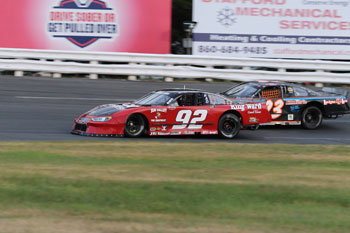 “I wasn’t even to the scales yet after the race was over and my guys were telling me about the bounty,” said Fearn. “I guess I’m flattered by it. It was a long time ago that I saw Tom Rosati have a bounty on him here at Stafford and I talked during the week with Mark [Arute] about it but I wasn’t sure if he was going to actually do it or not. I don’t want to give anything away, but I guess we’ll have to do something special now for this coming Friday. It makes for a nice story line for sure.”

Stafford Speedway has placed some restrictions on the $500 bounty to prevent any intentional over aggression on the race track. The bounty will be paid to the first driver to beat Tom Fearn when the #92 car finishes on the lead lap of the Late Model event. A Tom Fearn DNF will not count toward the bounty and if Fearn fails to finish the feature the bounty will roll over to the following week’s event.

“Beat Tom Fearn and you’ll walk out of Stafford with a $1,450 check for winning a Late Model race,” continued Mark Arute. “If that’s not encouragement, I’m not sure what is.”