(Stafford Springs, CT)—Stafford Motor Speedway and FloRacing are proud to announce a groundbreaking partnership to bring live racing from Stafford Speedway to the FloRacing platform. New for the 2021 season, all Stafford Speedway weekly events will be streamed live on FloRacing making Stafford the first asphalt track on the nationally recognized platform.

“The same first class production that race fans enjoyed on StaffordSpeedway.tv will move over to FloRacing,” explained Stafford Speedway COO Paul Arute. “Racing at Stafford Speedway will now be on a national stage alongside the Chili Bowl, Eldora Speedway, USAC Racing, and the All Star Circuit of Champions. FloRacing gives our fans the ultimate in live streaming access for just $150 per year.”

FloRacing is quickly becoming the leader in live streaming in grassroots racing with over 800 race events streamed in 2020 and over 1,000 scheduled to stream live in 2021. Stafford Speedway becomes the first pavement track added to the FloRacing lineup. Annual subscriptions to FloRacing include unlimited access to all live streaming content.  Also included in a subscription are the exclusive interviews, behind-the-scenes access, and ride-alongs with drivers, motorsports news, archived races, and highlights that racing fans have come to expect from the FloRacing platform. FloRacing subscribers also receive complete access to the entire network of FloSports verticals ranging from cycling, wrestling, football, baseball, softball, grappling, rodeo and more. Watch the races across all screens by downloading the FloSports app on iOS, Android, Apple TV, Roku, Amazon Fire, and Chromecast.

“FloSports is excited about the impact this partnership will have on pavement racing,” said FloSports Vice President of Rights Acquisition, Mike Levy. “It advances our already robust position in motorsports while allowing us to showcase the Stafford Speedway legacy that has, and will continue to be, a staple in the sport.”

FloRacing subscribers will be treated to an impressive 2021 racing schedule at Stafford Speedway with 25 events on the calendar including multiple extra distance races for the SK Modified® division as well as four 80-lap Open Modified events across the calendar.

“Just over 1 month ago we made the tough decision to run independent in 2021,” continued Arute. “Opportunities like this are exactly why we chose the independent path. We are extremely excited to partner with FloRacing. This partnership puts Stafford Speedway in front of a national audience and also provides opportunities for our race teams to market their sponsors on to an even wider audience of viewers.” 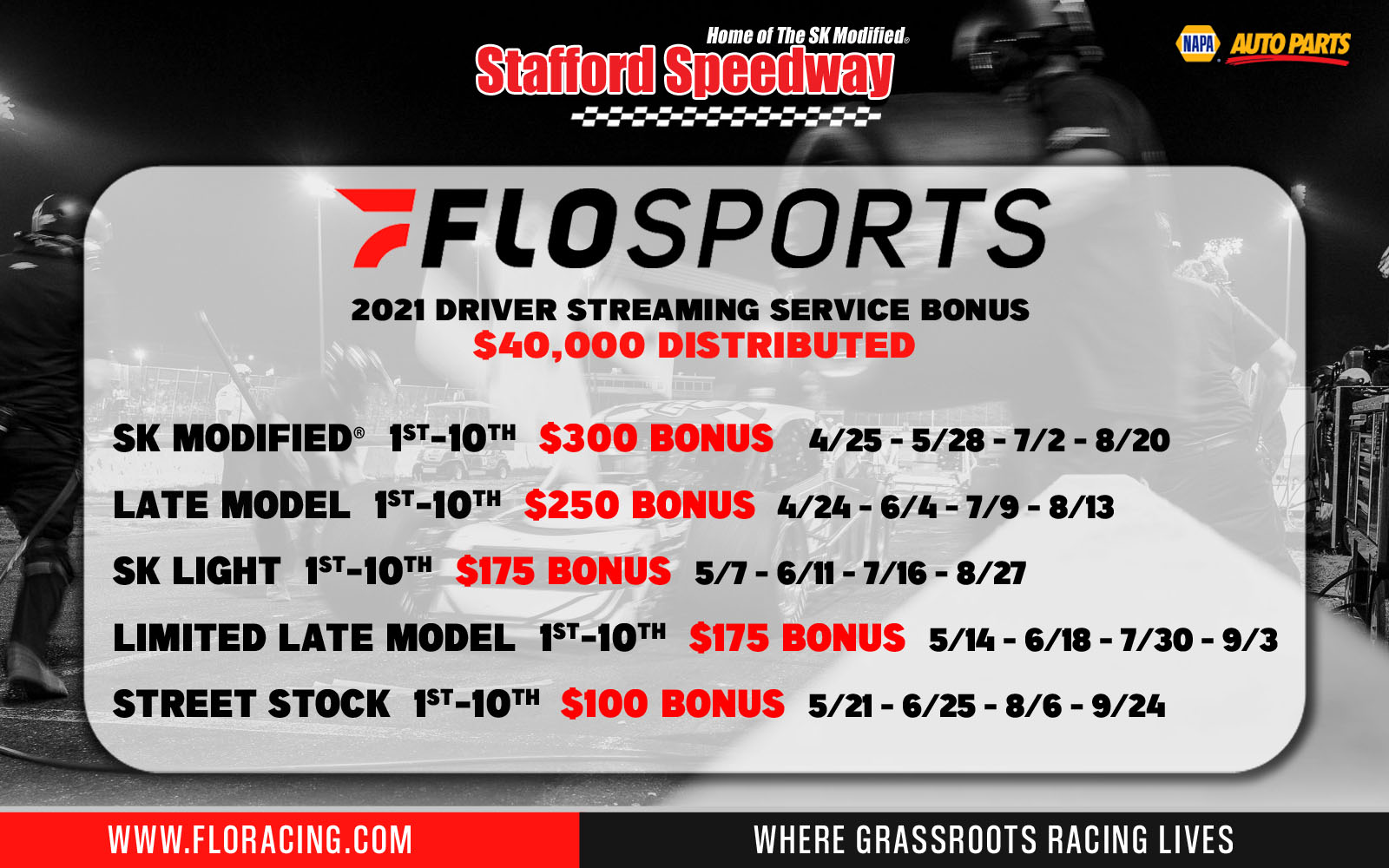 “The FloSports value proposition shines brightest when we’re able to meaningfully contribute to all levels of the sports we cover,” according to Levy. “Elevating the economy for drivers, sponsors, and rights holders is typically a recipe for success.”

“Between the FloRacing bonus and our new track point fund there will be at least $73,000 in new awards on top of our weekly payouts in 2021,” continued Arute. “We are looking forward to kicking off the 2021 season and showcasing the most talented weekly drivers in the country right here at Stafford.”

Race fans are encouraged to subscribe to FloRacing today to gain access to the full slate of live streamed events currently on the calendar. The Stafford Speedway season will kick-off Saturday, April 24th with 5 divisions of racing on NAPA Auto Parts Opening day all streamed live on Flo Racing.

Founded in 2006, FloSports is a venture-backed subscription video stream service dedicated to sports, offering live and on-demand access to hundreds of thousands of competition events across 25+ vertical sport categories in the U.S. and abroad. FloSports’ vision is to give underserved sports the love they deserve. With a growing library of more than 300,000 hours of premium content including news, expert commentary, films, documentaries, and more, FloSports has established itself as an innovator and leader in sports streaming. Finally, your sport has a home. For more information, please visit: flosports.tv.