(Stafford Springs, CT)—The 2018 NASCAR Whelen All-American Series season at Stafford Speedway is heading into the final stretch with only three races left in the race for the 2018 track championships. Here is a division by division look at the drivers who are vying to become track champions. 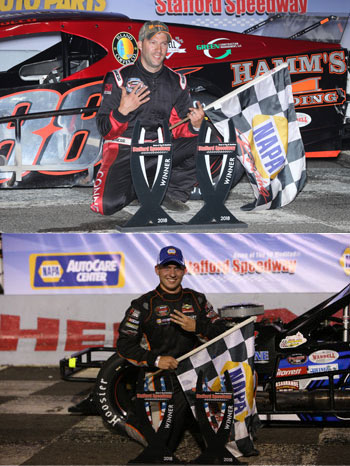 The SK Modified® division began the 2018 season right where the 2017 season left off. Keith Rocco won the final 2 races of the 2017 season to clinch his third track championship. Rocco and the #88 Wheelers Auto team continued their winning ways to kick off the 2018 season, capturing the first 4 SK Modified® races and establishing himself as the favorite for the track championship. But Ronnie Williams and the #50 SK Modified® team had other ideas about the championship. Williams began the season with back to back second place finishes and in a 10-race stretch from May 25 to July 27, Williams and the #50 Les’s Auto Center team scored 4 wins and 8 podium finishes with a worst finish of 8th to take control of the points race. With just 3 races left on the 2018 schedule, Rocco trails Williams by 66 points, or 33 positions on the race track, in the chase for the championship. Rocco has come back strong with wins in 2 of the last 3 SK Modified® feature events. This battle isn’t over yet. 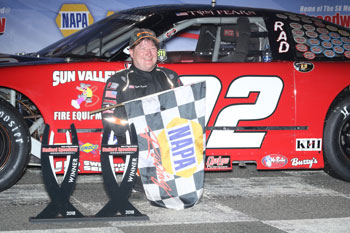 The Late Model division has seen the driver of the #92 King Ward Coach Lines Ford, Tom Fearn, dominant as a driver can be in a division. Through 18 races, Fearn has finished outside the podium only once, with 11 wins, 5 second place, and one third place finish to go along with an 11th place finish on May 11. Fearn heads into September with a 96 point lead over Tyler Leary and the #11 Amherst Trucking team and a 102 point lead over Michael Wray and the #42 DMW Graphics team. Should Fearn have a 100 point or larger lead at the conclusion of the Sept. 7 Late Model feature, he will have clinched the 2018 title with 2 races to go. 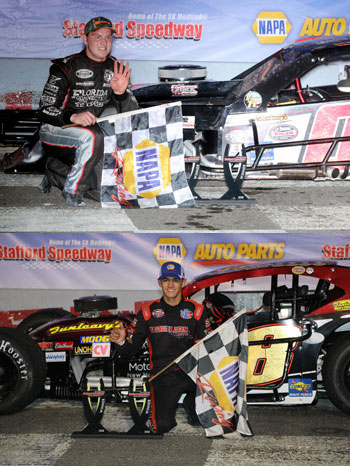 Stafford’s SK Light division has seen a season long duel between two young guns who are long time rivals dating back to their days as drivers in the Monday night Wild Thing Kart Series at Stafford. Making the move from the Limited Late Model division to SK Lights for 2018, Bryan Narducci showed right from the beginning of the season that his rookie status wasn’t going to limit his success in any way. As the driver of the #01 The Florida Connection Chevrolet he scored top-4 finishes in 8 of the first 10 races of the season. For the season to date, Narducci has 4 wins and has only 4 finishes in 18 races outside the top-4. Marcello Rufrano and the #88 Wheelers Auto team leads the SK Light division with 6 wins. While Rufrano holds the edge over Narducci in wins, Narducci trumps Rufrano in top-5 finishes by a 14 to 9 margin and he also has 15 top-10’s to Rufrano’s 14. With three races to go and only 22 points, or 11 positions on the track separating the two drivers in the standings, it’s anyone’s race as to who will take the title at season’s end.

In the Limited Late Model division, Jeremy Lavoie has been the man to beat for the majority of the season. Lavoie has scored a division and career high 8 feature wins this season and he leads R.J. Surdell by 38 points or 16 positions on the track with Ryan Fearn third in the standings, 64 points or 32 positions on the track behind. Lavoie’s 2018 season started off with a mechanical issue relegating him to an 11th place finish in the season opening NAPA Spring Sizzler feature event. But since then, the driver of the #6 Aspen Hill Farm Chevrolet team has been on a roll with 12 podium finishes in the next 17 races and he is closing in on his first career track championship. 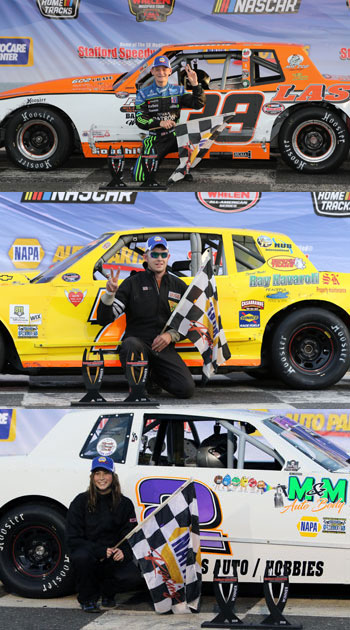 With an off-season rebrand from DARE Stock to Street Stock, the competition in 2018 has been ultra tight in the race for the championship. The standings are currently led by George Bessette, Jr. with Brandon Michael 10 points, or 5 positions behind, and rookie driver Meghan Fuller 36 points, or 18 positions behind. Bessette, a graduate from the Wild Thing Kart ranks, and Fuller are both second generation drivers while Michael is a Wild Thing Kart graduate who is going for his first championship after finishing second in 2016 and third in 2014. Bessette is in only his second full season behind the wheel of the #39 Lasco Roofing and Sheetmetal Chevrolet and he is tied with Johnny Walker for the division lead in wins with 3. Fuller won the opening Friday night feature event back on May 4 and she has been among the division front runners all season long with her #2 Propane Plus Chevrolet. Michael got off to a slower start than Bessette and Fuller but he firmly thrust himself into the championship picture with a string of 11 consecutive top-5 finishes from June 8 to Aug. 24. A flat tire in the Aug. 31 feature relegated Michael to a 12 place finish and allowed Bessette to retake the points lead that he held earlier this season. With the competition so close, any one of the three contenders could emerge at the NAPA Fall Final as the 2018 champion.

The Stafford Speedway September stretch run kicks off this Friday night, September 7th with a special 30-lap race for the Street Stock division with the SK Modifieds®, Late Models, SK Lights, and Limited Late Models all in action. Tickets for Friday, September 7th R.A.D. Auto Machine Street Stock 30 event are priced at $18.50 for adult general admission, $5.00 for children ages 6-14, and children ages 5 and under are admitted free of charge when accompanied by an adult. Reserved seat tickets are $20.00 for all ages. All ticket prices include 10% CT Admission Tax. Stafford Motor Speedway offers plenty of free parking along with overnight parking available for self contained Recreational Vehicles.