(Stafford Springs, CT)—With only 7 races left in the 2017 NASCAR Whelen All-American Series season at Stafford Motor Speedway, the track championship races are starting to come into focus. Friday, August 11th saw some shuffling at the top of the standings as some leaders encountered trouble while some other championship hopefuls got right back into the thick of the race. Here is a look at how the standings stack up in each of Stafford’s five weekly divisions. 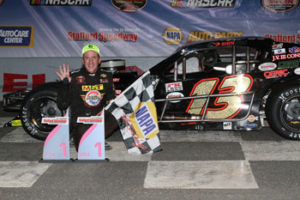 SK Modified® Division – Up until last Friday night, 2-time SK Modified® champion Keith Rocco had things going his way with 10 consecutive top-9 finishes since the beginning of the season. His streak came to an end last Friday night with a mechanical issue limiting him to a 16th place finish, which saw his point lead shrink from 26 points down to 6 points. Chase Dowling was the beneficiary of Rocco’s misfortune as his second place finish vaulted him from third to second behind Rocco. Ronnie Williams fell a spot in the standings down to third after a 15th place finish, while 2-time defending track champion Rowan Pennink moved up to fourth and Ted Christopher moved up to fifth after his 4th feature win of the season. The top-5 drivers are separated by 48 points, which is 2 points less than what a feature victory is worth and with 7 races to go, the race for the title will be wide open. 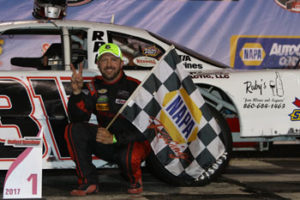 Late Model Division – Glen Reen has held the point lead since the beginning of July and his second feature win of the 2017 season last Friday night opened up his lead from only 2 points to 12 points over Kevin Gambacorta. Defending Late Model champion Tom Fearn finished second last Friday night and he remains in third in the standings, 18 points behind Reen. Michael Wray is fourth, 36 points out of the lead, and Michael Bennett sits fifth, 46 points behind. Just like the SK Modified® division, the top-5 are all separated by less than the value of a race win and drivers will be going all out over the final 7 races to try to win the championship. 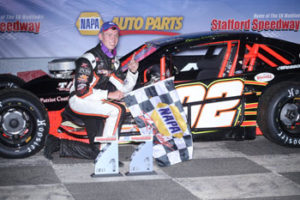 SK Light Division – The younger brother to the SK Modified® division has been a see-saw affair this season in the race for the championship. Through the first 11 races of this season, 4 different drivers, Cory DiMatteo, Wesley Prucker, George Nocera, Jr., and Dan Wesson have each taken a turn leading the points. Wesson is the point leader heading into this Friday night, but David Arute, who is the only driver in the top-5 who hasn’t yet led the standings this season, closed the gap to Wesson down to a mere 2 points, or one position on the track. Cory DiMatteo, who is the leading winner in the SK Light division this season with 3 wins, is third in the standings and only 6 points behind Wesson. George Nocera, Jr. is fourth, 24 points behind and Wesley Prucker is fifth, 28 points behind. Brett Gonyaw, who won the Dunleavy’s Modifiedz Night 40-lap feature earlier this season, is sixth, 34 points behind. With 7 races to go and drivers in such close proximity, there is sure to be another shuffling or two of the top-6 in the standings before the season ends. 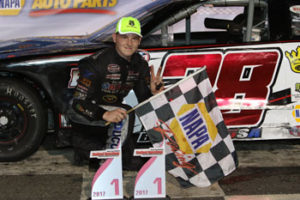 Ltd. Late Model Division – Jeremy Lavoie has been at the top of the standings since his one and to date only feature win of the season back in mid May. Although he only has one feature win thus far in 2017, Lavoie has been the dominant force with top-5 finishes in all 11 feature events run to date. But despite Lavoie’s consistent top-5 finishes, defending track champion Duane Provost is right on his heels, only 6 points behind. Al Saunders, who won the 2015 track championship, is third, 18 points behind. Bryan Narducci, who won last Friday night, is now fourth and 28 points behind Lavoie with Robert Bloxsom, III sitting fifth, 46 points behind. Can Lavoie continue his run of top-5 finishes and ride that to a championship or will one of the other championship contenders rise up over the final 7 races of the season? 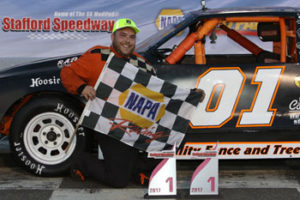 DARE Stock Division – Defending track champion Johnny Walker has once again been the man to beat in the DARE Stock division. After a 12th place finish to open the season, Walker has reeled off 10 consecutive podium finishes with 4 wins, 4 second place finishes, and two third place finishes. He enters this Friday night’s feature action with a comfortable 52 point lead over rookie driver George Bessette, Jr., who made the move into the DARE Stocks from the Wild Thing Karts ranks Trace Beyer is currently third with Vince Gambacorta and Chris Bagnall rounding out the top-5 in the standings.

This Friday night at Stafford Speedway is the Girls Night Out / Intrepid Fallen Heroes Fund Track Walk / K&N Promo Night program. Ladies can get a general admission ticket for only $10 while everyone can be part of the track walk for a $10 donation to the Intrepid Fallen Heroes Fund, which will be collected by NAPA representatives. There will also be K&N gift bags to be given away to fans in attendance. Regular tickets are priced at $17.50 for adult general admission, kids 6-14 are $5.00 and kids 5 & under are free. Reserved seating is available for $20 for all ages. All ticket prices include 10% CT Admission Tax. Stafford Motor Speedway offers plenty of free parking along with overnight parking available for self contained Recreational Vehicles.