(Stafford Springs, CT)—Stafford Speedway’s Late Model division takes center stage this Friday, August 16 with the extra distance Late Model 50. Not only will Late Model drivers be racing extra laps, but they will also be racing for extra cash. The Late Model 50 carries a purse of $10,000 with the winner guaranteed to win $1,200. Add the $125 iRacing and $25 N.E. Racing Fuel, Sunoco contingency bonuses, and the winner’s share increases to $1,350. A regular 30-lap Late Model feature pays $800 to win, which is what the third place finisher in the Late Model 50 will take home. 10th place pays $325 with the race paying $250 to start. 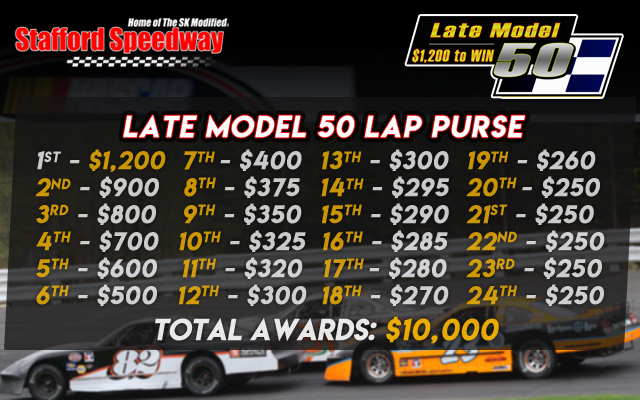 In addition to purse and contingency bonuses, Late Model drivers will also have an opportunity to take home even more cash thanks to the Gaston Racing Enterprises High Roller Challenge. Similar to the Gambler’s Challenge for the NAPA SK 5K event, Late Model drivers pay $50 into a prize pool with Bill Gaston matching the driver’s contribution up to $1,000. The GRE High Roller Challenge will max out at $2,000 if 20 drivers enter. The distribution of the money will be left to chance as the race winner will roll a die in NAPA Victory Lane to determine the bonus payout. The four options are; winner takes all, split evenly among the top-5 finishers, 6th through 10th place finishers, or the 11th to 20th place finishers. The GRE High Roller Challenge currently stands at $1,600 with 16 competitors entered. Late Model teams can still enter the GRE High Roller Challenge by contacting the track office or registering this Friday at the track prior to the start of the qualifying heats.

Tom Fearn and the #92 King Ward Coach Lines team leads all Late Model drivers with 7 wins this season and he has recorded 14 top-5 finishes in 15 starts this season, but Fearn has never won an extra distance feature at Stafford in his career, spanning back to the early ‘90s and the ProStock division. Fearn holds a commanding 106-point lead over Michael Wray in the chase for the Late Model track championship, which means Fearn can afford to take some extra chances in pursuit of his first career extra distance feature victory. 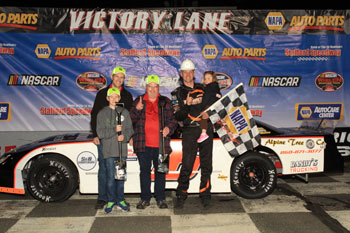 Other drivers who have reached victory lane this season in the Late Model division includes Kevin Gambacorta and the #23 Lavigne Law team, Al Saunders and the #40 American Sleeve Bearing team, and Michael Wray and the #42 DMW Graphics team, who have all won twice. Drivers with a single feature win to their credit this season are Adam Gray and the #97 Meadows Motor Car team and Cliff Saunders and the #14 American Sleeve Bearing team.