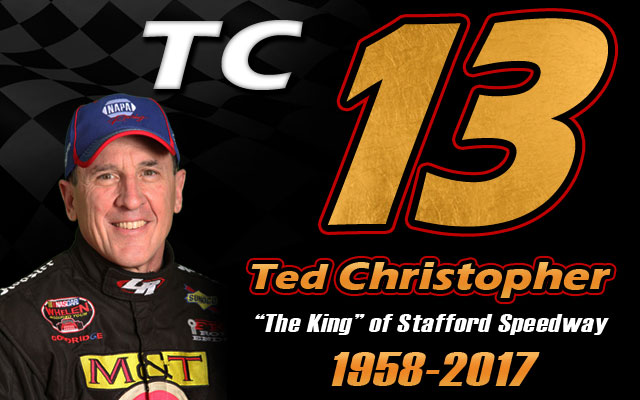 Ted Christopher, a hero, a rival, a legend and a once in a generation driver. His first start at Stafford Speedway in May of 1983 marked the beginning of a journey, a journey that no one could have predicted. 35 years later the journey comes to an end with statistics that make you ask, was Ted the greatest modified driver of all-time; 131 career wins, 109 SK Modified® wins, and 9 SK Modified® Track Championships.

At the request of both fans and race teams that have a prior commitment at New Hampshire this weekend, Stafford Speedway management has moved the ceremony to retire Ted Christopher’s number 13 to Sunday, October 1st as part of the pre-race for the NAPA Fall Final. This will allow all teams and fans to share in this tribute.

This Friday, September 22 we will honor Ted Christopher and his racing career with all those in attendance.

“Since Ted’s first win in 1986 to his last win on September 8, just 2 weeks ago, he has been a fixture at Stafford,” explained Stafford GM Mark Arute. “We will miss TC but we will never forget him.  We will retire his number from weekly Modified racing at Stafford Speedway on Sunday, October 1st as part of the NAPA Fall Final Weekend. The number 13 is and always will be Ted’s number.”