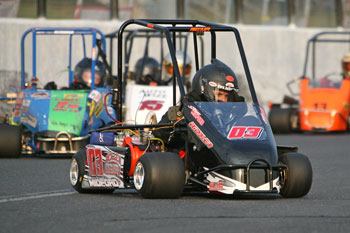 (Stafford Springs, CT)—With teams busy preparing their machines for the 2018 NASCAR Whelen All-American Series season, Stafford Speedway’s Limited Late Model division has added Steve Midford to its 2018 driver roster. Midford comes to Stafford with a background in the Senior Champ and Medium Pro divisions from Wild Thing Karts where he raced with his brother Ronnie Midford, Jr. and the support of their father and full-time mechanic Ron Midford, Sr.

“I ran Monday night Wild Thing Karts with my brother in the Sr. Champ division and we had some great success there while also chasing the indoor racing series at Atlantic City and Providence, RI,” said Midford. “I took a couple years off from racing with the birth of my daughters Jordyn and Makayla and now I’m ready to get back to Friday nights with the support of my wife Emily.”

While this is Midford’s first experience driving a full-bodied racecar, his Uncle Tom Bolles and late Grandfather Ed Bolles have been involved in the racing scene for Steve’s entire life. For Steve, racing on Friday nights in the Limited Late Model division is the realization of a lifelong dream and he is excited about his prospects for his rookie season.

“I ran an SK Modified® at Thompson during practice a couple of times, but that was years ago,” said Midford. “I’m very excited about the opportunity. My family has been around racing my whole life and racing at Stafford is something that I’ve always wanted to do. I grew up going to Riverside Park, Thompson, and Stafford Speedway every week so I’m excited to have my own race deal going now.” 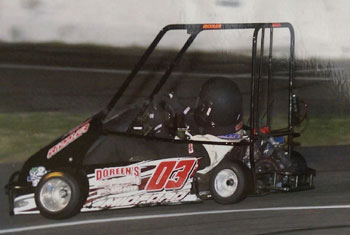 Midford purchased the #28 car that Bryan Narducci had driven for the past 2 seasons and was driven by David Arute prior to Narducci. In total, the #28 machine scored 17 feature wins from 2012-2017 with both Arute and Narducci finishing in the top-4 of the points standings. With the past success of the #28 machine, Midford already has a comfort level that he otherwise wouldn’t enjoy as he embarks on his rookie campaign.

“It was actually the week that Ted Christopher passed away I went to the track with my brother and I got talking with Scott Myers, who works on Todd Owen’s car, and we were talking about the Limited Late Model car that Bryan Narducci was driving,” said Midford. “Bryan went out and won that night and then the next day Scott called me up and said the car was for sale. Bryan had a lot of success in it and David won a lot of races in it so hopefully it can be a good car for us as well. Going into the season knowing we have the right equipment is a big confidence builder for us and we’re excited to get things started with that car. There won’t be any excuses with the car if we don’t run well, it’ll all come down to me as the driver.”

Another area that Midford can gain confidence from is the fact that there is a host of drivers who got started in the Wild Thing Karts ranks and have gone on to win races at Stafford including Paul and David Arute, Alexandra and Ryan Fearn, Bryan Narducci, Marcello Rufrano, Dan Wesson, and Ronnie Williams.

“I’ve talked with Bryan Narducci and although it’s a big transition, it’s not impossible to move from karts up to the Limited Late Model,” said Midford. “Hopefully we can get a practice or two before the season starts and see how things go. It’s good to know that there have been others who have made the move from Wild Thing Karts into different divisions at Stafford and had success and won some races. It shows that our goals for this season are achievable.” 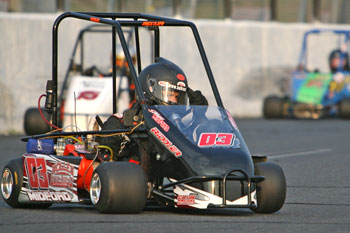 Midford has set modest goals for himself to shoot for during his rookie season.

“I’d certainly like to win rookie of the year and it would be great if we could get a win or two under our belts,” said Midford. “A bigger goal for us would be to just get a couple of podium finishes. We’ve had great success in everything else we’ve raced and it would be awesome if we can at least be in the conversation towards the end of the season for the championship. The main thing for us will be to try to learn the car as quickly as we can and keep the car in one piece so we can have something to work off of going into the next week. We have Dean Luginbuhl Snap On Tools, Kar Kare Car Star A Division of Bolles Motors, Rodan & Fields Consulting-Emily Midford, and we’re talking with several more potential partners about the 2018 season.”

Midford will make his Limited Late Model debut at the 47th Annual NAPA Auto Parts Spring Sizzler® on April 27-29. Tickets for the “Greatest Race in the History of Spring” are on sale now at the Speedway Box Office. Tickets are priced at $40.00 for adult general admission tickets, $5.00 for children ages 6-14, and children ages 5 and under are admitted free of charge when accompanied by an adult. Reserved seating is priced at $42.00 for all ages. As always, Stafford Motor Speedway offers free parking with overnight parking available. All tickets are good for both Saturday and Sunday admission. All ticket prices include 10% CT Admission Tax.