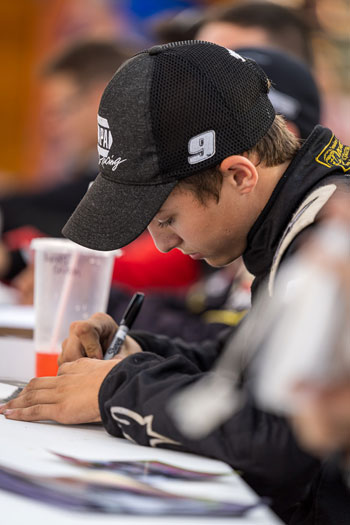 (Stafford Springs, CT)—For 16 year old Ellington, CT native Steven Chapman, the 2019 season at Stafford Motor Speedway was nearly a fairy tail season. Chapman, a graduate and 2-time champion of the Monday night Wild Thing Kart Series at Stafford, and the #14 Chapman Apartment Homes team showed no signs of being a rookie during the 2019 season as they finished all but one race in the top-10 and were championship contenders for the entire season before finishing second to Teddy Hodgdon in the final SK Light standings.

“This season was way above our expectations,” said Chapman. “I didn’t think that we would be in the running for the championship. Everyone wants to win the championship, but our main goal was to win Rookie of the Year, so we’re happy we were able to accomplish that goal. I’d like to thank Chapman Apartment Homes, Critical Signs, Competitive Edge, K & W, NAPA of Tolland, Centurn Machine, BSR, R.A.D. Auto Machine, and all my crew, Brian, Rick, Robby, my brothers, my parents, Bill, Mark, Kevin Guay, Jimmy and Jim, and everyone that helped me this year.” 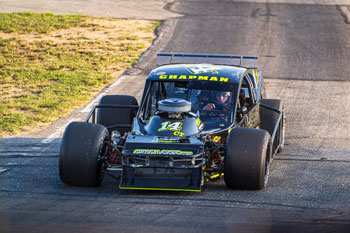 As far-fetched as a rookie driver winning a championship might sound to some in racing circles, Chapman was vying to become the fifth SK Light rookie driver to win the championship. Michael Gervais, Jr. (2009), Matt Galko (2010), Jeremy Sorel (2014), and Cory DiMatteo (2017) all won the SK Light championship as rookie drivers. Chapman got his rookie campaign off to a strong start with 5 consecutive top-7 finishes to hold the point lead for the first time following the May 31 feature event. Chapman fell back to third after the June 7 feature but was either first or second in the standings for the final 14 races. Chapman swapped the point lead back and forth several times with Teddy Hodgdon throughout August and Chapman actually held the lead by 4 points at the end of August. Hodgdon went on to win the final 2 races of the season to claim the championship, Chapman was left to settle for second. 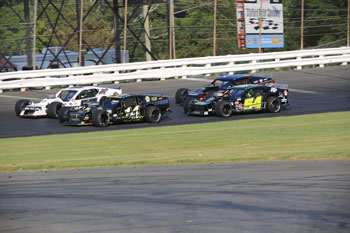 “I don’t remember exactly when we took the point lead, but it was pretty cool to be in the point lead during the season,” said Chapman. “When Teddy took it back from us, we started to get a little worried but my Dad said throughout the whole year that if we didn’t win the championship, we were going to keep our heads held high because we were a new team and winning Rookie of the Year and finishing second in the points was a great year for us. Towards the end of the year it was starting to get stressful.”

Chapman ended coming up just short of winning the championship in his rookie season and also came up just short of taking down his first career SK Light feature win at Stafford. Chapman logged three second place finishes and one third place finish this season, but heads into the 2020 season still in search of that elusive first Stafford Speedway win.

“Everybody wants to win races and we really wanted to win a race pretty bad this year,” said Chapman. “It was disappointing that we didn’t win but we can’t beat ourselves up. We had one night where we were in the lead and we got taken out, so it was disappointing but at the same time we realized we were a new team and this was our first time ever in a modified, so I think overall our performance was pretty good. Everyone always says the first win is the hardest so hopefully we can get that knocked out of the way early next season and then we can win a couple more races. I don’t think anyone knows just how bad I want to win a race.” 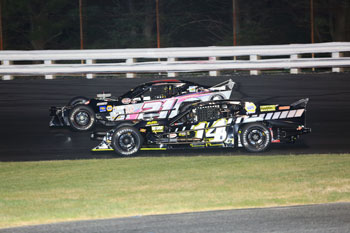 With his rookie campaign under his belt, Chapman is already looking forward to getting back out on track and use the lessons he learned this season to not only chase his first victory, but to once again challenge for the championship.

“I’m really excited for next season, I wish we could go racing right now,” said Chapman. “My rookie year is out of the way now and everyone always says that your rookie season is the hardest. We got a ton of good experience this year and I think we’re going to be pretty good next season. I think we can be even stronger next season than we were this season and we’re looking to get a couple of wins next season and winning races will help us in the race for the championship.”

Chapman will officially be crowned the 2019 SK Light R.A.D. Auto Machine Rookie of the Year at the 50th Annual Stafford Speedway Champion’s Awards Banquet, scheduled for Friday, November 15 at Maneeley’s in South Windsor. Tickets to the awards banquet are $50 and are on sale now. Tickets can be ordered by calling the track at 860-684-2783 or they can be ordered online at www.staffordspeedway.com.