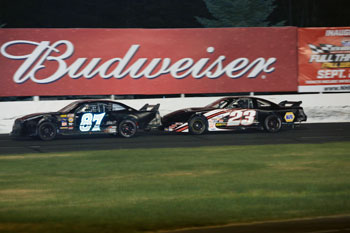 (Stafford Springs, CT)—For Ellington native Steven Midford, the 2018 Limited Late Model season at Stafford Speedway marked a return to racing after a 4-year layoff. Midford came into the Limited Late Model division with virtually no experience in a full size car coming from the Wild Thing Kart ranks where he drove Medium Pro and Sr. Champs karts. Midford posted 5 top-5 and 18 top-10 finishes this season with his #23 Kar Kare CarStar Chevrolet and took home the R.A.D. Auto Machine Rookie of the Year honors.

“I was very excited to win Rookie of the Year,” said Midford. “Basically our ultimate goal was to win Rookie of the Year and it was what we came to the track to do so it was a big accomplishment for us. I would say it took about half the season to really come around in these cars and get used to how they handle. It was not as easy as I thought it would be going from where I was in karts to the Limited. Taking a couple years off also didn’t help and I had to knock a little rust off. I think we came up to speed pretty quickly but we just didn’t get to where we wanted to be. We started to figure things out about halfway through the season and from there we were really able to pick up the pace. I have to thank Kar Kare CarStar, Snap-On Tools, NAPA Auto Parts, Hometown Pizza of Ellington, and my dad Ron Midford, my brother Ronnie Midford, Jr., Jenna from Lincoln Tech, and my wife Emily and my daughters Jordan and Makayla for their support this season.”

The biggest adjustment for Midford to make after not racing for four years was the transition from a 450 pound Sr. Champ kart to a full-size 3,100 pound Limited Late Model machine and trying to figure out what the car needed to be fast. Midford says that things started to pick up around halfway through the season and it was the final Friday night race on Sept. 14 that Midford says was his best race of the season where he finished third. 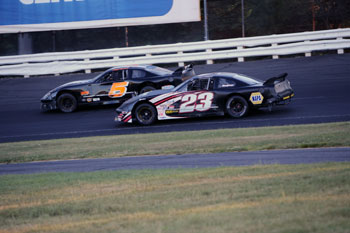 “The jump from the karts to a full sized car was a big jump and a lack of knowledge about the setup of the car was the biggest hurdle for us,” said Midford. “Once we started to figure out how to get the car set up towards the end of the season, the car really came around. It was definitely a big jump for us. The last Friday night of the season was the highlight of the year for us. We couldn’t make it to the Fall Final so that was our last race of the year and we finally made it to the center of the infield and were able to get interviewed by finishing on the podium so that was the highlight of our season. We had talked to some people throughout the season about the setup and for that last race we had a new setup in the car with new shocks and springs, and the car really came alive. I wish we could have had the car like that for the whole season.”

While the 2018 season was a success for Midford and the #23 team, they were missing one thing. A trip to NAPA Victory Lane.

“I think my expectations were a little higher because the goal of every driver is to win a race and we didn’t get a win, so that was a little disheartening,” said Midford. “Overall we had a couple of podium finishes and we ran pretty consistently all year long so I’d say we did pretty well for our first year. The season was a success and we did what we could, but we did come up a little short not getting a win.” 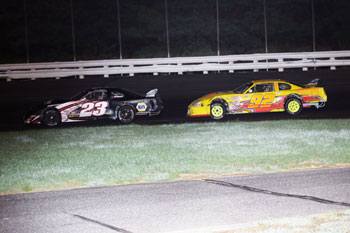 In addition to Midford enjoying a successful rookie season, he also got a lesson in the comradery of the Limited Late Model division.

“The Limited Late Model division is a great division with a great bunch of girls and guys to race with and everyone races clean,” said Midford. “I remember one night in the first practice the throttle hung up and the car was destroyed, we took off the entire front end. Everyone from the division was over at the car helping us and giving us parts to get back on the track for the race. We got the car fixed but the only problem was just as we were pulling out on the track the fuel pump broke on the motor and we were done for the night. But it’s a great group of people in that division.”

Midford will officially be crowned as the 2018 R.A.D. Auto Machine Limited Late Model Rookie of the Year at the 49th Annual Stafford Motor Speedway Champions Awards Ceremony on Friday, November 16 at Maneeley’s in South Windsor.