(Stafford Springs, CT)—Prior to the start of the 2020 racing season, Quinn Christopher, wife of the late Stafford Speedway legend Ted Christopher, established the Ted Christopher Drive for Safety Initiative.  Any driver who had registered a number to race in 2020 at Stafford was eligible to sign up and receive a free nomex undershirt, helmet skirt, or carbonx head sock.  Those drivers were also entered into a drawing to win a brand new firesuit, courtesy of Leaf Racewear.  With Christopher having already distributed the safety items during the July 24 Dunleavy’s Modifiedz Night, the time has come for the winner of the Leaf Racewear firesuit.  Christopher will draw the winning name at the conclusion of the driver’s meeting this Friday night, September 11. 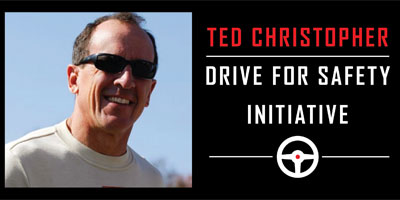 “I’ll be picking a name out of the almost 100 drivers who signed up to participate in the Ted Christopher Drive for Safety Initiative to win a brand new Leaf Racewear firesuit this Friday at Stafford at the conclusion of the driver’s meeting,” said Christopher.  “This program has been a great way to keep Teddy’s name alive and keeping his name alive through a safety program is perfect because driver safety was always so important to Teddy.  Talking to a lot of drivers, they’ve all told me that Teddy would always tell them they needed a fireproof undershirt and it’s been amazing that something so small has such a big impact on drivers, especially the younger drivers who all looked up to Teddy.  Racing is a dangerous sport, no matter what level you’re at and you never know what can happen so whatever we can do to help keep drivers safe is a great way to honor Teddy.”

The Ted Christopher Drive for Safety Initiative program not only helps the memory of Ted Christopher alive to those who were closest to him, those who raced against him, and those who either cheered or jeered for him while he was racing, but it helps those same people cope with the loss of a local short track legend.

“It’s been pretty cool to see drivers walking around the pits wearing the safety gear with Teddy’s initials embroidered on them,” said Christopher.  “Seeing drivers wearing the safety gear always brings a smile to my face.  Whenever you can keep someone alive and in your memory, it helps make the tragedy not so bad.  A lot of times, whenever someone passes away you don’t hear about them anymore.  I know a lot of fans and racers still struggle not having Teddy at the track any more so this is a great way to keep his name mentioned.”

With nearly 100 drivers supporting the Ted Christopher Drive for Safety Initiative, Christopher is already having thoughts of how she can make the program even bigger and better next season.

“I went into this not knowing what to expect,” said Christopher.  “At the time, I didn’t even know how many drivers were registered to race at Stafford this season so I was pleasantly surprised with how many drivers signed up for the program.  With so many drivers I’m already thinking about how we can make this program even bigger and better.  I’m hoping to do this again next year, maybe not necessarily with SK Modified® drivers, but there’s touring series, indoor series, kids racing go karts on Monday nights, so there’s a lot of options we could go with.  Safety items are not just something you wear, maybe we could do something with things that go inside the race car.  Who knows where we’ll go with this program.”

This Friday night, September 11, the TC 13 SK Modified® Shootout and regularly scheduled 40-lap SK Modified® feature will be paired with Stafford’s Late Models, SK Lights, Limited Late Models, and Street Stocks for a full night of NASCAR Weekly Racing.  Tickets for the NASCAR Weekly Racing / TC 13 SK Shootout are priced at $20.00 for adult general admission, $5.00 for children ages 6-14, and children ages 5 and under are admitted free of charge when accompanied by an adult. Paddock passes are $40 and all tickets for this event are available for purchase now at www.staffordspeedway.com.