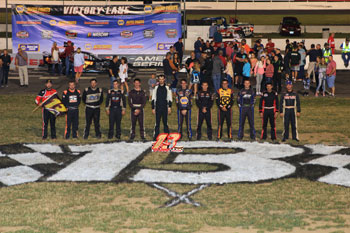 (Stafford Springs, CT)—The TC 13 SK Modified® shootout in honor of the late Ted Christopher returns to Stafford Speedway Friday, July 12th with support from multiple sponsors. The 13-lap shootout held after the conclusion of the scheduled 40 lap SK Modified® feature was introduced in 2018 to honor 9-time track champion Ted Christopher who tragically lost his life in 2017. The TC 13 Shootout is made possible by generous partners who have committed to supporting the event in its second year. Gaston Racing Enterprises, Life Care Family Chiropractic – Dr. Sean Noel, John Rayner Real Estate and Big Haus USA Racing Products have each posted $500 to the purse.

“We introduced this event last season in an attempt to honor Teddy,” explained Stafford General Manager Mark Arute. “With 131 career wins, Teddy was the king of Stafford and thrilled fans for years. We thought it made sense to do a unique shootout event in his honor. We have an amazing trophy from Sign Pro and we’ve had great sponsors step up to support the purse that TC would have loved to run for.” 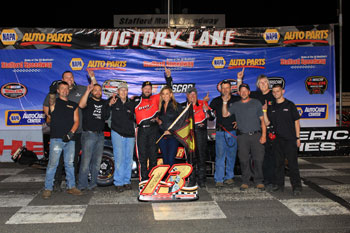 The Inaugural TC 13 SK Modified® shootout was won by Glen Reen, driver of the #17 SK Modified® owned by Dan Avery. Reen, sporting a Ted Christopher tribute paint scheme, won the feature in thrilling fashion holding off Chase Dowling for a breakout win. Since his win in the 2018 TC Shootout Reen has grabbed two more wins including a win early in 2019.

“I think it’s going to be another race of survival to make the TC 13 field,” said Reen. “Last year was extremely hard to just make it. I think going for the win last year was easier than the race for 13th place was. I think we have a good car we just have to see what happens. I think the invert is a great idea. Winning that race meant a lot, it probably ranks right up there with my Tour win as the biggest wins of my career. Especially to win that race for Dan Avery, I saw him wreck last year and I know how bad he wanted to be in that race and win it. If it couldn’t be Mike, Jr. winning the race, then I said to myself there’s no way I wasn’t winning that race for Dan. To bring that trophy back to Dan’s shop and put it up on the wall next to a photo of Teddy hugging Dan after Dan won his first race driving one of Teddy’s cars, that’s where the trophy belongs. My pattern this year seems to be good, bad, good, bad, so hopefully we can be good that night.” 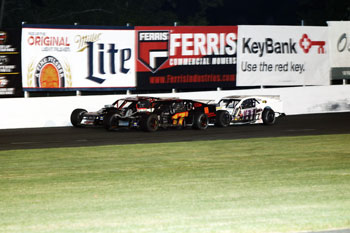 The 2019 event will be similar to the 2018 edition with the top-13 finishers in the 40-lap SK Modified® feature transferring to the TC 13 SK Modified® Shootout. New for 2019, the winner will draw a number 1 to 13 to determine the invert. If 13 is drawn the 13th place finisher will start on the pole of the shootout.

Stafford Speedway is still looking for additional partners to join the program. Any individual or business interested in supporting the event may contact the track office (860-684-2783).

The TC 13 SK Modified® Shootout will once again be paired with the Bud Light Open Modified 80, the 3rd Open Modified event of the 2019 season. Stafford’s Late Models, SK Lights, Limited Late Models, and Street Stocks will also all be in action. Tickets for the Bud Light Open Modified 80 / TC 13 SK Shootout are priced at $30.00 for adult general admission, $5.00 for children ages 6-14, and children ages 5 and under are admitted free of charge when accompanied by an adult. Reserved seat tickets are $32.00 for all ages. All ticket prices include 10% CT Admission Tax. Stafford Motor Speedway offers plenty of free parking along with overnight camping available for self contained Recreational Vehicles.