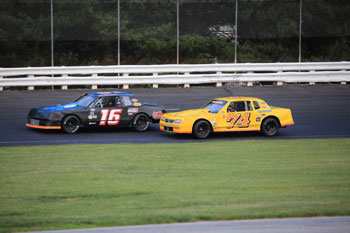 (Stafford Springs, CT)—Coming into the 2018 season, Stafford Street Stock driver Brandon Michael had his focus set on trying to win the track championship. Michael has been close to winning the championship, finishing 4th in 2013, 3rd in 2014, and 2nd in 2015. The 2018 season saw Michael and his #74 All Season Small Engine Repair team get off to a good start in his pursuit of the championship with top-8 finishes in each of the first three races. A second place effort on May 11 saw Michael leading the points but a near disaster would strike the very next race in the form of a blown engine, which Michael and his team thought would sideline them for the remainder of the season. But thanks to a team effort, they were able to get a new motor in the #74 car and their hard work paid off last Friday night with Michael scoring his first win of the 2018 season.

“We didn’t know exactly what the problem was until we got back into the pit area and saw that the oil pan had a big hole in it,” said Michael. “We all looked at each other and kind of thought that everything was over at that point. Funds were not there at the beginning of the season and we scratched together what we could over the winter to get the car ready to race. We all came together and luckily Donny at R.A.D. had an engine in stock and we were able to get the new motor in the car. I have to thank Donny at R.A.D., John Berardi, Ray Kocum, Mike, and my Mom and Dad. If it wasn’t for their help, I wouldn’t have been able to replace the motor. We decided that it was too early to give up with how close we were in the points. Luckily everything went pretty smooth.” 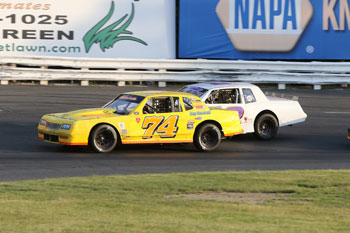 n three races with his new engine and with finishes of 4th and 9th to go along with his victory from last Friday night, he is currently 4th in the Street Stock standings, only 14 points out of the lead. With two-thirds of the season to go, Michael is focused on winning more races instead of worrying about where he is in the standings on a week to week basis.

“Hopefully we can cap off the season with a few more wins and the championship,” said Michael. “The focus now is to keep improving on the car and try to win as many races as we can. When it comes down to 3 or 4 races left, we’ll start worrying about points but for now our focus is to win races. I think we had the monkey on our back for a while and we finally got rid of it last week. I’d love to go back to back this Friday night. I’ve never won back to back races before. I think we’ve figured out what we were missing with the car and the motor is starting to break in nicely. After the changes we made to the car after we won last Friday night, I think we’re definitely going to be a car to beat every week. The competition is so tight in the Street Stocks, anyone can win a race on a given night. We’re in it to win it at this point.”

A championship for Michael would be the realization of a life-long dream come true. Michael has been racing for 18 years since he got started in go karts at age 6 and despite some close calls, he has yet to win a championship in any division. With his victory last Friday night, Michael says he has some new sponsors coming on board which just might give him the extra boost he needs to capture his first championship. 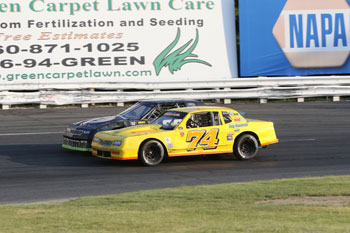 “To grab the championship would be huge for us,” said Michael. “We’ve been right there the past couple years and I think we were just missing that little bit of extra luck. I’ve been racing since I was six in go karts and I haven’t won a championship yet so it would be a pretty cool accomplishment to have under your belt. I wouldn’t want to win a championship anywhere other than Stafford. I have to thank All Season Small Engine Repair, Berardi Transmission, Basement Screen Printing, Route 10 Tire, Peaceful Pools and Spas, Ray Navaroli, and we picked up a new sponsor this week with SK Lawn Care and we have a couple more sponsors coming on board in the next week or two. I think our win definitely helped us get our name out there and pick up a few more sponsors to help us make a run at the championship.”

The Street Stocks along with Stafford’s SK Modifieds®, Late Models, SK Lights, and Limited Late Models are all back in action this Friday as part of Whelen Event Night. Tickets for this Friday night’s races are priced at $18.50 for adult general admission tickets, $5.00 for children ages 6-14, and children ages 5 and under are admitted free of charge when accompanied by an adult. Reserved seating is priced at $20.00 for all ages. All ticket prices include 10% CT Admission Tax. As always, Stafford Motor Speedway offers free parking with overnight parking available.