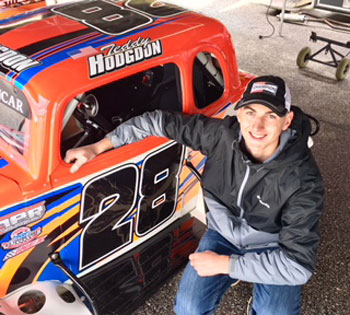 (Stafford Springs, CT)—As teams are buys preparing for the 2018 NASCAR Whelen All-American Series season, one driver who can’t wait to get started is Danbury native Teddy Hodgdon. The 16 year old driver will make the move from Legend Cars competition into the SK Light division where he will challenge for R.A.D. Auto Machine Rookie of the Year honors.

“I’m all fired up and I’m ready to get started on the next chapter of my racing career,” said Hodgdon. “We did pretty well in the Legend Cars and hopefully we can do just as well as we did in the Legend Cars with the SK Light car. I would like to win Rookie of the Year this season and if we could get a win, that would be amazing. I’m not really setting high goals for myself, I’m more focused on learning the car and trying to set my plans for the future.”

Instead of his familiar #28 that he has carried throughout his entire racing career, Hodgdon will race in the SK Lights with the #55. Hodgdon has sponsorship from Montanari Fuel and Champion Spark Plugs and it was the connection through Montanari Fuel that saw Hodgdon land the number 55 for the 2018 season. 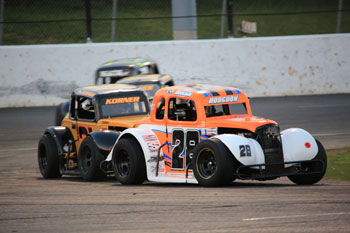 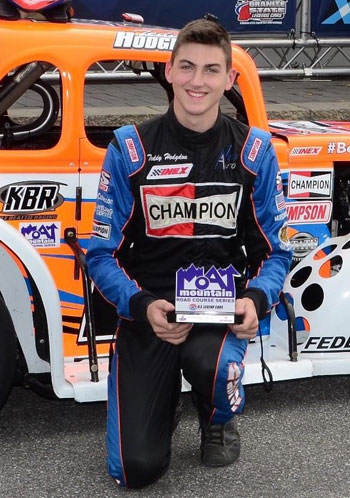 “It’s a pretty cool story about how we settled on the number 55,” said Hodgdon. “Back in the day when my father was going to races at Danbury Arena, Andy Montanari was his favorite driver and he drove the #55 car. My dad still has a photo of him and his sister standing next to Andy’s #55 car and with him coming on board with us this season, we’re going to run the #55 as a tribute to Andy. Montanari Fuel has a rich racing history and I’m glad to be partnered with them this season along with Champion Spark Plugs. It’s pretty cool to come full circle and have Montanari Fuel supporting me this season and to have their name on the car. I also have to thank Ness Auto, State Cutters, and my entire family for all of their support. It’s been my dream to go racing and they’ve been able to support my dream.”

Although Hodgdon enters the SK Light ranks with 9 seasons of competition under his belt at Stafford, the 2018 season will be the first time he turns laps around the half-mile. Hodgdon’s Stafford experience has all come driving around the mini-mile in the Wild Thing Kart ranks as well as with the Legend Cars from 2014-2016. Hodgdon has several championships to his name with a Wild Thing Karts Tiger Sprint championship in 2011 and this past season saw Hodgdon win the Road Course World Championship in the Legend Cars ranks. Hodgdon knows he faces a big learning curve, but with his past experience he is ready to tackle the challenge of moving into the SK Lights for the 2018 season.

“We took our Legend Car over to Finland to compete against the best drivers in the world and we had a blast,” said Hodgdon. “I’ve been in open wheel my whole life so it’s not really going to be anything different, it’s just a bigger car and a different challenge. It’s going to be an exciting year for sure trying to learn all I can about modifieds. The modifieds are all tire while the legend car is all about throttle management, so it’s going to be a completely different turnaround in my driving style. I’ve seen guys come up from the Legends to SK Lights and run up front in their first couple of races, so why not me too?”

In order to help prepare for his rookie campaign, Hodgdon will be looking to the virtual world of iRacing to help him get a head start on how to best get around Stafford behind the wheel of an open wheel modified machine.

“I’m going to fire up my iRacing here in a couple of weeks to start practicing so hopefully that will be a big help for me,” said Hodgdon. “It’s such a huge advantage to be able to do that. I remember my first year of Legends I was going down to Charlotte for a Summer Shoot-Out race and I fired up that track on iRacing and once I got down there, it was just like it felt on the computer, the iRacing was so realistic. I’m also going to be watching some YouTube videos of Stafford to see what I can learn. The iRacing only helps so much and with video, you can see where guys are letting off and getting back on the gas and Stafford is such a unique track you can’t really compare it to any other half-mile track across the country.” 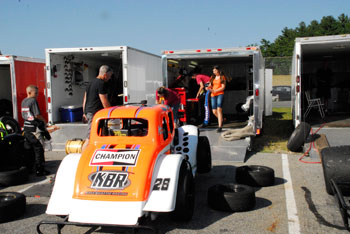 If the iRacing and YouTube videos don’t give Hodgdon all the assistance he needs, he has two more aces up his sleeve. The car that Hodgdon and his family bought was the #6 machine that Cory DiMatteo drove to the 2017 SK Light championship and they will have 2017 SK Modified® champion Keith Rocco helping them out with car setup.

“Since we know how good Cory ran with the car we should have a good piece underneath us and especially since we’re working with Keith Rocco, he’s going to give us a lot of help and that should be a big advantage for us going into the Spring Sizzler,” said Hodgdon. The little things that he can do to the car that we don’t really know about yet should be a big help so hopefully he can steer us in the right direction.”

Hodgdon will make his SK Light debut at the 47th Annual NAPA Auto Parts Spring Sizzler® on April 27-29. Tickets for the “Greatest Race in the History of Spring” are on sale now at the Speedway Box Office. Tickets are priced at $40.00 for adult general admission tickets, $5.00 for children ages 6-14, and children ages 5 and under are admitted free of charge when accompanied by an adult. Reserved seating is priced at $42.00 for all ages. As always, Stafford Motor Speedway offers free parking with overnight parking available. All tickets are good for both Saturday and Sunday admission. All ticket prices include 10% CT Admission Tax.

For more information on the 47th Annual NAPA Auto Parts Spring Sizzler, or to order tickets, contact the Stafford Motor Speedway track office at 860-684-2783 or visit us on the web at www.staffordspeedway.com.