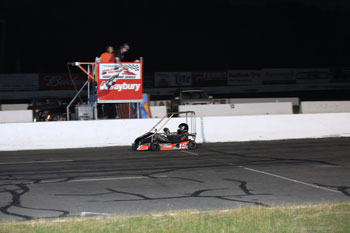 STAFFORD — Tim Sullivan of South Windsor has already mapped out his strategy for Friday’s special Senior Champ Kart 20-lap race at Stafford Motor Speedway — “Get up and go.”

“Hopefully I’ll run good in the heat race, get a good starting spot and then just take off,” Sullivan said. “I want to make sure the kart stays fast for 20 laps.”

Sullivan is enjoying a great season on Mondays at Stafford, racking up six victories and grabbing the Senior Champ point lead. He hopes to extend his winning ways on Friday in this non-points race.  He realizes, however, that this won’t be a joy ride. Friday night’s race at Stafford will bring out all the big guns in the division. 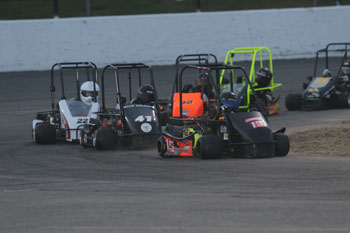 “The competition should be pretty good,” Sullivan said. “My brother Brian will be racing. There’s Nick Hadden. Mike Perry, Ryan Borges — all the best drivers. There should also be a couple of drivers from New York and a couple from New Hampshire. It will be a good turnout.”

Also expected to compete are Scott Foster Jr. and Sean Foster, two drivers who have NASCAR wins at Stafford, and Justin Dube.  That means Sullivan will have to be at the top of his game.

“It’s going to be pretty cool,” Sullivan said. “I’m usually at Stafford every week anyway helping friends and family. It will be cool to race with all the people you hang out with every Friday.”

Sullivan will be looking to make up for last year’s special Friday night Sr. Champs race at Stafford where he lost the lead with 5 laps to go and couldn’t get it back before the checkered flag.

“Last year I got passed with five laps to go, and I wish I could have made a tire adjustment,” said Sullivan. “I might have been able to win. I won’t make that mistake this year.” 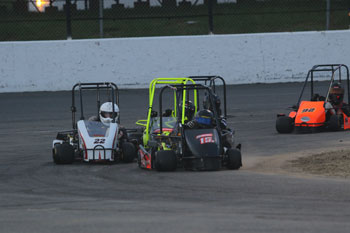 Sullivan started his kart racing career in 1995 and has competed in major races all over the East Coast. In 2002, he moved to Thompson Modifieds and then a Sunoco Modified at Thompson Speedway Motorsports Park. After being idle from 2009-12, Sullivan returned to kart action in 2013 in the Wild Thing Karts. He has won three championships in the Senior Champs, a division Sullivan says is at karting’s highest level.

“People will be amazed at how fast these karts can go,” Sullivan said. “Anyone who has driven one knows how demanding it can be. You’re not just driving yard karts. They are tough to drive, especially at Stafford because you’re going pretty fast.”

Making it even tougher is the competition.

“There’s always a great group of competitors going to all the major races,” Sullivan said. “They go to where the money is.”

Sullivan’s sponsors include Sullivan Landscaping and Pro Kart Racing Chassis. On his crew is his 3-year-old son Jayce, his wife Ann Marie, his dad Jim Sullivan and Rory West.

Sullivan said his kart career is winding down — at least as a driver.

“My plan is to drive for two more years,” Sullivan said. “Then my son will be ready for the Wild Thing Karts. He’ll be the driver and I’ll be the crew chief. In that way, I’ll be able to stay in the game.”

It’s a game he’s excelled at for more than 20 years.