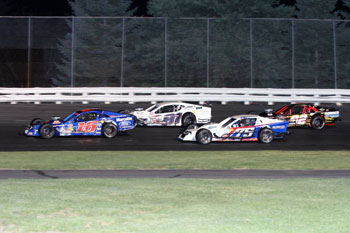 (Stafford Springs, CT)—With the dawn of a new season just over the horizon, Stafford Speedway SK Light driver Todd Douillard has been busy preparing his #16 Marcotte Ford machine in hopes of recording his first feature win. Douillard got started in the SK Light division in 2013 and in five seasons his best career finish has been a pair of second place efforts during the 2016 season. Douillard feels like he has everything he needs in place in order to score his first victory at Stafford.

“We’re looking forward to getting back on the track,” said Douillard. “We had the entire car redone and now are building on it to make it even better. We’re going to take things one week at a time and see how things go. We want to win some races this season. Chris Kopec is helping us out and he gives me some good advice and I know I need to be a little more aggressive on the track. We bought a backup car in case it’s needed. We noticed a lot of other teams were going that route so we have to do the same to stay on top of the game. With a backup car in place, I can afford to be a little more aggressive in trying to go for wins. We have Marcotte Ford, Collision Plus Auto Body, and Kopec’s Auto as our sponsors this year and I also have to thank Grandpa and Grandma Lusty, and my car owner Fred Silliker. Also I’m excited that my cousin Hunter Duquette will be starting in the Cubs division in Wild Thing Karts on Monday nights with the same paint scheme as we have on the SK Light car.”

As Douillard prepares for the upcoming season, he has an extra confidence about himself thanks to his team’s off-season maintenance work on the #16 car. Douillard’s team purchased their car from NASCAR Whelen Modified Tour driver Eric Goodale.

“We sent the car to Jason Shepard, who is Eric Goodale’s crew chief because that’s who we bought the car from,” said Douillard. “The car was fast at the start of last season and then it got wrecked and we tried some things ourselves and it wasn’t as good so we sent it back to him this winter. We actually just picked it back up before they left for SpeedWeeks at New Smyrna. Now that the car has gone to Jason, we’re real confident that the piece we’re bringing to the track is the best that we can bring.” 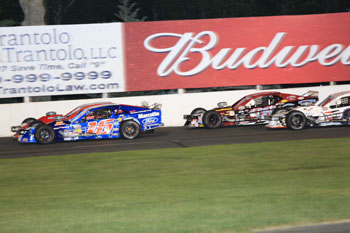 The 2017 season saw Douillard get off to the best start of his Stafford career with top-10 finishes in three of the first four races. A wreck in the big money Dunleavy’s Modifiedz night feature sidelined Douillard for several races but he still ended the season in 10th place in the points standings.

“In the beginning of last year the car was fast,” said Douillard. “We had to take a provisional at the Sizzler and we came from the back up to seventh and after that I was putting my experience to good use. We were fourth in points last year when we wrecked the car during the Dunleavy’s night and then had some money issues and had to miss a few weeks. It was really disappointing. We were running up front and things were looking pretty good and then we had the wreck.”

After having been so close to reaching NAPA Victory Lane for the first time during the 2016 season, Douillard knows he has what it takes to win race, it’s just a matter of making it happen on the track. It’s often said in racing that the first win is the hardest win to get.

“A win would mean the world to me,” said Douillard. “Stafford to me is the most prestigious track in the country. People down south want to know what happened at Stafford just like us up north like to know what happened at Bowman-Gray. We’re a family run team and we put all we have into the car. They always say the first win is the hardest to get and I think if we can get that first win, they’ll come a lot easier after that.”