(Stafford Springs, CT)—Stafford Motor Speedway concluded its 2019 NASCAR racing season with feature events for the SK Modified®, Late Model, and SK Light Modified divisions as part of its NAPA Auto Parts Fall Final Weekend. Taking down feature wins were Todd Owen in the SK Modified® feature, Wayne Coury, Jr. in the Late Model feature, and Teddy Hodgdon in the SK Ligh feature. Owen’s win meant he ended the season tied with Ronnie Williams in the points standings, but Williams had 5 wins this season to Owen’s 4 to make him the champion for the second consecutive season. Hodgdon came into the NAPA Fall Final as the SK Light points leader and he won his first Stafford championship in grand style by winning the race. 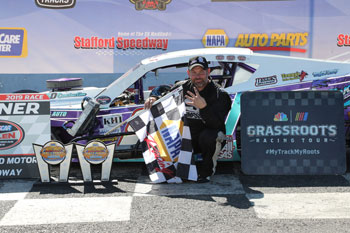 In the 40-lap SK Modified® feature, Marcello Rufrano took the lead at the green with Joey Cipriano second and Tyler Hines in third. Andrew Molleur took fourth with Michael Gervais, Jr. in fifth. Behind Gervais was a side by side duel between Keith Rocco and Todd Owen for sixth. The caution came out with 10 laps complete for a spin by Shawn Thibeault in the middle of turns 1+2.

Rufrano took the lead on the restart with Owen all over his back bumper in second. Rocco came up to third with Michael Christopher, Jr. and Cipriano side by side for fourth. Stephen Kopcik was up to fifth with Gervais behind him in sixth. Owen took the lead from Rufrano on lap-12 and Rocco followed him through to take second and drop Rufrano back to third in line. Kopcik was now fourth with Gervais fifth and Cipriano sixth. The caution came back out with 20 laps complete for Curt Brainard, who came to a stop in the middle of turns 3+4 with smoke pouring from his car.

The caution came right back out on the restart as Chase Dowling nearly spun and came to a stop at the pit road exit in turn 2. Owen took the lead on the next restart with Rocco still in second. Rufrano was third with Gervais and Kopcik side by side for fourth. Cipriano spun and collected the car of Andrew Molleur to bring the caution back out with 26 laps complete. 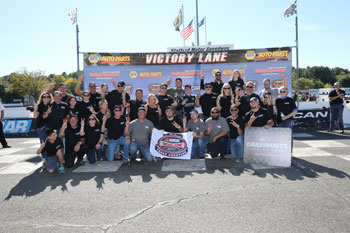 Owen took the lead with Rocco and Kopcik behind him on the restart. Rufrano slid back to fourth while Gervais and Dan Avery were side by side for fifth with Ronnie Williams up to seventh. Mike Christopher spun coming out of turn 2 to bring the caution back out with 28 laps complete.

Troy Talman, Tyler Leary, and Tyler Hines all spun on the backstretch to bring the yellow right back out on the restart. Owen again took the lead on the restart while Kopcik was able to take second from Rocco. Rocco was third in line with Gervais and Rufrano side by side for fourth and Williams in sixth. Williams took fifth on lap-31 as Rufrano slid back to sixth. With 8 laps to go, the order was Owen, Kopcik, Rocco, Gervais, and Williams. With Owen in the lead, Williams needed to be at least fourth to win the SK Modified® championship.

Williams was able to get to the inside of Gervais on lap-37 to take fourth and put himself in a championship clinching position. Owen led Kopcik to the checkered flag to pick up his fourth win of the 2019 season. Rocco finished third with Williams fourth and Gervais fifth. Williams fourth place finish saw him tied with Owen in points but Williams had 5 wins to Owen’s 4 this season, which made him the 2019 SK Modified® track champion. 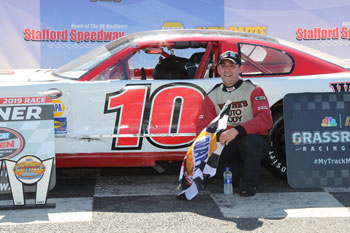 In the 30-lap Late Model feature, Michael Bennett took the lead from polesitter Paul Varricchio, Jr. and Al Saunders moved into second with Varricchio falling back to third, just ahead of Paul Arute in fourth. Ed Ricard spun in turn 4 to bring the caution out with 1 lap complete.

Bennett took the lead with Saunders in second on the restart. Ryan Fearn moved around Varricchio to take third with Varricchio slotting into fourth and Arute in fifth. Ryan Fearn went by Saunders on lap-5 to move into second and began to try to close down the gap to Bennett, who had pulled away from the field in the opening laps. Andy Marchese spun in the middle of turns 1+2 to bring the caution back out with 7 laps complete.

Ryan Fearn ran Bennett down and made a pass for the lead but just as he made his move the caution came out with 12 laps complete for spins in turn 1 by Rob Dow and R.J. Surdell.

Bennett took the lead back under green with Wayne Coury, Jr. coming up to second. Al Saunders was third in line with Ryan Fearn back to fourth and Rom Fearn was fifth. Ryan Fearn got back by Saunders for third on lap-18 and Tom Fearn followed him through to drop Saunders back to fifth and the caution came back out with 18 laps complete for a spin in turn 4 by Scott Bouley.

The field completed one lap with Bennett still holding the race lead before the caution came back out for a spin in turn 2 by Ryan Fearn.

On the restart, Scott Bouley came to a stop with fluid leading from his car and Tom Fearn got collected and had damage to his front bumper to bring the caution right back out. The next restart saw Bennett again take the lead with Coury second. Darrell Keane and Al Saunders were side by side for third with Michael Wray in fifth. Saunders got loose on lap-20, which allowed Keane to take third and dropped Saunders back into a side by side fight with Wray for fourth place.

Coury was working Bennett over for the race lead and the two cars touched coming out of turn 4 on lap-24. The two cars touched again on lap-25 in turn 2 with Bennett maintaining the lead. Coury came back to Bennett’s inside on lap-27 to take the lead. Coury was heading towards the checkered flag when R.J. Surdell brought the caution out with a spin in the middle of turns 3+4 to set up a green white checkered finish.

Coury took the lead on the restart with Bennett giving chase in second. Bennett couldn’t get close enough to Coury as Coury took down his first career win at Stafford. Kevin Gambacorta finished third with Al Saunders and Wray rounding out the top-5. 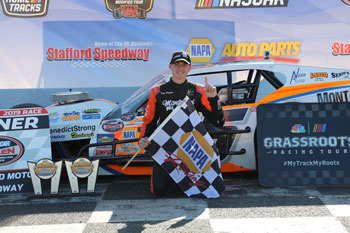 In the 20-lap SK Light Modified feature, a multicar incident in turn 3 involving Fred Nees, Jr., Alina Bryden, Brett Gonyaw, and Chris Viens brought the caution out before a lap could be completed.

Norm Sears took the early lead but Joey Ferrigno took the lead from Sears on lap-2. Noah Korner was third with Mark Bakaj and Sami Anderson side by side for fourth. Bakaj was starting to charge in the outside lane and he took second from Sears on lap-8 with Ferrigno still out front. Sears was still third in line with Anderson fourth. Teddy Hodgdon, who came into the race as the SK Light points leader, narrowly avoided disaster on lap-8 as Bob Charland spun and nearly collected Hodgdon to bring the caution out.

Ferrigno took the lead back under green with Bakaj on his outside in second. Anderson was third in line with Sears and Korner side by side for fourth. Hodgdon powered his way around Korner to move up to fourth on lap-11 and Bryan Narducci took fifth on lap-13 as Ferrigno continued to lead Bakaj. Hodgdon got by Anderson to move into third place on lap-14 and he pulled alongside Bakaj for second place on lap-15. The caution came out with 15 laps complete for a spin in turn 2 by Steven Chapman and Noah Korner with Alina Bryden’s car also coming to a stop at the entrance to turn 1.

Ferrigno took the lead on the restart with Hodgdon and Bakaj side by side for second. Narducci was fourth with Anderson and Alexander Pearl lined up behind him. The caution cmae back out with 16 laps complete for Bobby Jones, who came to a stop on the backstretch infield. 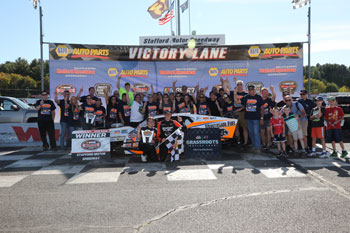 Ferrigno again took the lead with Bakaj and Hodgdon side by side for second. Hodgdon cleared Bakaj and pulled to the outside of Ferrigno for the lead on lap-18. Amanda West came to a stop against the turn 4 wall to bring the caution back out with 18 laps complete to set up a green white checkered finish.

Ferrigno took the lead at the green but going into turn 3 Hodgdon dove to the inside of Ferrigno to take the lead. Ferrigno and several other cars spun in turn 4 coming to the checkered flag, allowing Hodgdon to cruise to the checkered flag. The win was Hodgdon’s second consecutive win and fifth win of the 2019 season and clinched the 2019 SK Light championship. Pearl came home in second with Nick Anglace, Brian Sullivan, and Chapman rounding out the top-5. Bryan Narducci was penalized by NASCAR Officials to the rear of the field for causing the last lap contact and since he was on probation from earlier this season, he was disqualified from the finishing order.