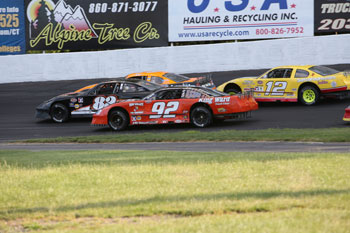 (Stafford Springs, CT)—When Stafford’s Late Models take to the track this Friday, September 6, Tom Fearn and the #92 King Ward Coach Lines team will have the opportunity to clinch their third Late Model championship in the last four seasons. Fearn and the #92 team took the point lead after the NAPA Spring Sizzler® feature and they have occupied the top spot in the standings each week since. Fearn will enter this Friday night’s race with a 122-point cushion over Michael Wray. If Fearn finishes no more than 11 positions behind wherever Wray finishes tomorrow night, he will be the 2019 Late Model champion.

“It’s a culmination of being consistent all year long,” said Fearn. “We built up a point lead and we’re planning on continuing to do what we’ve been doing all season long. We got to this position by going after it and going for wins and we’re not going to stop that now.” 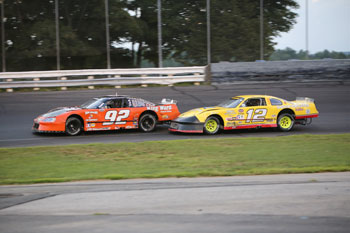 Fearn and the #92 team winning races and championships in the Late Model division has become a familiar theme over the past five seasons. Prior to the start of the 2015 season, Fearn had 16 Late Model wins in 11 seasons. Since the start of the 2015 season, Fearn has won 40 races, an average of 8 wins per season and he still has three more opportunities to add to that win total this season. Fearn has also been a mainstay in the championship race, finishing fourth in 2015 and second in 2017 while winning the title in 2016 and 2018.

“We moved into a new shop a few years back and with all three cars, Alexandra (Fearn), Ryan (Fearn) and mine, in the same location it has helped us as a team,” said Fearn. “We have a good baseline setup to work off of and we’re confident when we come to the track, which helps. I’ve always said that races are won in the shop during the week and it took me 30 years to put together a great team and be able to do what we’ve been doing and it’s paying off for us.” 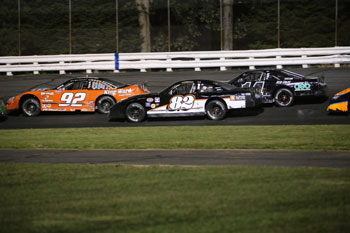 Fearn is quick to credit his crew as well as becoming a more patient driver behind the wheel as the main factors in his on-track success over the past 5 seasons in Stafford’s Late Model division.

“I always say that I have the best crew in the Stafford paddock area and we’ve got something that works for us and we’ve been sticking to it,” said Fearn. “A couple years ago Stu [car owner Fearn] had his hands full working on all 3 cars so we assigned a car chief for each car. Kevin Soper is my car chief and he’s made a big difference for us. Between Kevin, Stu, John, Matt, myself, Jim, Dave, Willie Kuhn, who just won his first race at Monadnock, Amedeo, and my wife spotting for me, it’s a very good team effort. I also have to thank all our sponsors, King Ward Coach Lines, Sun Valley Fire Equipment, Whips Sporting Goods, JR Sweeping, SAFCO Foam, R.A.D. Auto Machine under the hood, Buzzy and John Williams for the drivetrain, Joe Hamm Chassis, Hoosier Tire, Independent Wheel, and Waddell Communications. We’ve been consistent and if we’re not winning races we’re finishing up front every week. A lot of people might not think I’m a patient driver but I’ve become a lot more patient the last couple of years.” 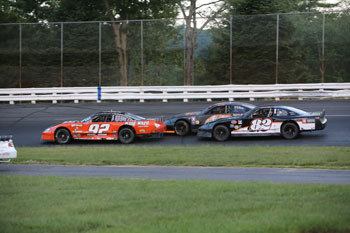 Should Fearn wrap up the championship chase this Friday night, it would mark his third Late Model track title to go along with three ProStock track titles to give him 6 championships overall at Stafford. Fearn would tie Phil Rondeau and Jim Peterson with three Late Model titles, and he would tie Ryan Posocco for the second most track titles in Stafford history, trailing only Ted Christopher, who won 9 SK Modified® titles. Fearn also has his eyes set on locking down a top-3 finish in the Division II NASCAR Whelen All-American Series national points standings.

“I can’t fathom that I could have that many championships,” said Fearn. “I’ve been pretty lucky that we’ve assembled a great team. A gentleman told me a couple years ago in order to win a championship, we had to finish every lap of every race. We did that 2 years ago and didn’t win the championship and we didn’t do that last year but we won the championship. So far this season we’ve finished all the laps. We’ve got a couple more weeks to go and we’re looking to continue that and we have national points that we’re looking at as well. If things can work out and we can finish in the top-3 in the entire country, that would be great and it would be nice to represent Stafford Speedway as well.”

Tickets for this Friday night’s NASCAR Weekly Racing program are priced at $20.00 for adult general admission, $5.00 for children ages 6-14, and children ages 5 and under are admitted free of charge when accompanied by an adult. Reserved seat tickets are $23.00 for all ages. All ticket prices include 10% CT Admission Tax. Stafford Motor Speedway offers plenty of free parking along with overnight parking available for self contained Recreational Vehicles.