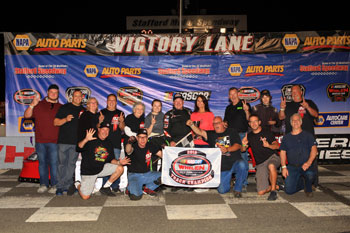 (Stafford Springs, CT)—For Tom Fearn and the #92 King Ward Coach Lines Late Model team, the 2018 season has been nothing short of utter dominance. With his 12th win of the season last Friday night, Fearn clinched his second Stafford Late Model track championship. Combined with his three ProStock track titles in the ‘90s, Fearn now has 5 career track titles at the Connecticut half-mile facility. Fearn has been so dominant this season that he wrapped the championship up with 2 races still to go on the calendar.

“I’ve never won a championship with 2 races to go before but there’s always a first for something,” said Fearn. “Usually it comes down to the last lap of the last race and I’ve won championships in the past by 2 points but now we can come back knowing we’re the champions and we can represent the speedway as the champion. We can’t complain at all, it’s been a great year.” 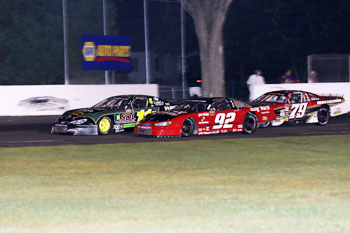 Fearn’s 12 wins this season broke his own division record of 10 wins in a season that he set back in 2015. To further illustrate just how dominant Fearn and the #92 team have been this season, in 19 races they have 12 wins, 5 second place finishes, 1 third place finish, and an 11th place finish back on May 11 when a mechanical issue ended his night prematurely. Fearn says his level of performance can all be traced back to his crew and the preparation they put in at their shop during the week preparing for Friday nights.

“My crew does all this for me and I’m just the lucky guy who gets to drive it and put it in victory lane,” said Fearn. “I always say I have the best crew in the paddock area and we have a good car with Joe Hamm building the chassis and R.A.D. Auto Machine under the hood. We have great support from SAFCO Foam, Sun Valley Fire Equipment, King Ward Coach Lines, JR Sweeping, and Whip’s Sporting Goods, we have Buzzy and John Williams helping with the drivetrain. It’s all a big team effort. My wife Sue spots for me and she’s right on every week and she helps keep me safe out there. We picked up on a few things and made some changes on the car that were real good. We stayed with the car all year long making small changes week to week to make it better and it’s been a lot of fun. I guess my 30 years of experience is starting to pay off a little bit.” 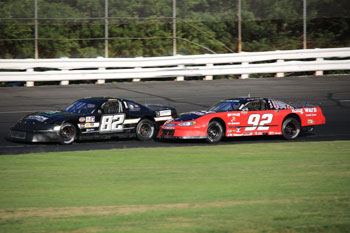 With Fearn already establishing a Stafford Late Model record with his 12 wins this season, he will go into the final 2 races of the year with no pressure and looking to extend his record for wins in a season.

“Our plan is to do as well as we can these next two races,” said Fearn. “We won’t have any pressure on ourselves except the pressure we put on ourselves to perform. We’re going to try to keep on winning. I guess we could throttle back a little but it would be nice to get a couple more wins this year. Not to be stingy, but when you’re going this good, you like to keep on going.”

Fearn will officially be crowned the 2018 Late Model champion at the 49th Annual Stafford Speedway Champions Awards Ceremony to be held on Friday, November 16 at Maneeley’s in South Windsor.