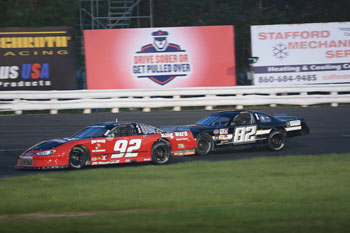 (Stafford Springs, CT)—When Tom Fearn scored his first Late Model win of the 2018 season at Stafford Speedway on May 18, it was the start of a milestone 6-race winning streak that set a track record for consecutive wins in the Late Model division. With his 8th and most recent win of the season coming on July 13th, Fearn is on the verge of reaching another milestone in the Late Model division. Fearn will enter the Friday, July 20th Late Model feature with 44 career wins, one victory behind Ryan Posocco for the most wins in the division’s history.

“That is some pretty good company to be in,” said Fearn. “I know I’m the win leader in the ProStock division and if I could one day be the Late Model win leader, it would be another feather in the cap. Ryan won a lot of races and although I think he has retired from racing, nothing is official and he could come back and race again one day.”

With Fearn already having notched 8 wins in 12 starts this season with his #92 King Ward Coach Lines Ford, and 10 more races on the schedule before the 2018 season comes to a close at the NAPA Fall Final on Sept. 29-30, Fearn feels good about his chances of setting a new Late Model win benchmark this season. 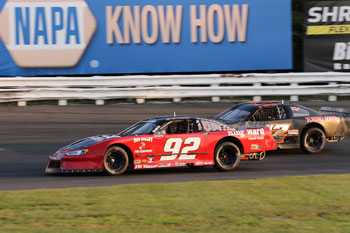 “We’ve been on a roll and we’d like to keep that going,” said Fearn. “One minor thing on any night could stop that from happening, but we’ll show up ready to win and hopefully we can get it done this week. If not this week, then hopefully the next week. With how things have gone this season, I feel pretty confident we could get it done at some point this season. People always ask how we win all these races and I tell them we have a great car and a great crew and I have 30 years of experience. I’ve been racing at Stafford longer than some of the guys have been alive.”

“I think that would be a little more significant than the Late Model record to be among guys like Bugsy,” said Fearn. “It’s a great honor to be in the top-4 or top-5 of the All-Time win list. Teddy Christopher, I don’t think anyone will ever touch his record at Stafford but to be in the top-4 or top-5 on any win list means that you had a pretty good career. It will probably be a lot of years before someone comes along and knocks us out of that top-5.” 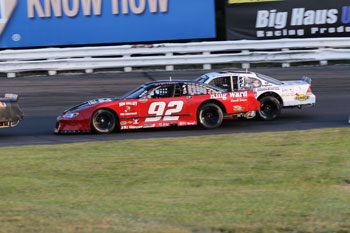 Fearn has been somewhat of a late bloomer in his Late Model career. Of his 44 career Late Model wins, 34 of them have come since the start of the 2013 season. Fearn’s best season came in 2015 when he won 10 races and with 10 races still left on the 2018 calendar, he might eclipse that mark this season. In addition to his team and his sponsors, Fearn says that a newfound patience has been a key to recording so many wins over the last 5 and a half seasons of Late Model competition.

“I think the biggest thing is that we’ve assembled a great team of crew members over the last 4 or 5 years and we all work really well together,” said Fearn. “SAFCO Foam gives us a great shop to work on the car and the ability to go out and win races. We have great support from King Ward Coach Lines, Sun Valley Fire Equipment, Whips Sporting Goods, Guns N Gear, and JR Sweeping, and with Hamm Chassis, R.A.D. Auto Machine under the hood, and John Williams and Buzzy working on the driveline, it’s a great combination. Everything gets done and it gets done right in a timely manner. When we go to the track, we’re prepared and we’re ready to win. I think maybe we’re a notch above the rest right now but at some point they’re going to catch up and we’ll have to look for something new to get back above them again. Every week we try to put the best we have together to get out there and be able to win races. You’re always learning things out on the track and I’d say the last 5 years or so I’ve become more patient behind the wheel to make sure we’re there at the end. You have to be there at the end if you want to win races.”

Fearn will attempt to tie Ryan Posocco this Friday night as part of the Girls Night Out/Intrepid Fallen Heroes Fund Track Walk program. Ladies General Admission tickets for this event are just $10 at the gates with all other Adult General Admission Tickets priced at $18.50. As always kids age 6-14 are just $5.00 and kids 5 & under are free. Reserved seating is available and is priced at $20.00 for all ages. All ticket prices include 10% CT Admission Tax. Stafford Motor Speedway offers plenty of free parking for auto racing events along with overnight parking available for self contained Recreational Vehicles. Fans can also take part in the Intrepid Fallen Heroes Fund Track Walk for a $10 donation, which will be collected at the NAPA booth set up at the main entrance with all proceeds going to the Intrepid Fallen Heroes Fund.