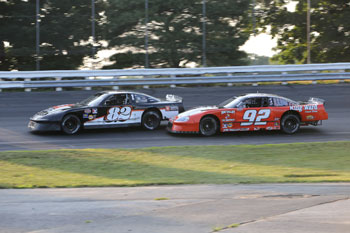 (Stafford Springs, CT)—For many years, Bugsy Stevens held the Stafford record for all-time wins with 72, a mark that many thought would never be reached again. Ted Christopher was the first driver to match and surpass Stevens’ mark in 2002 and Woody Pitkat matched and surpassed Stevens in 2015. Tom Fearn is the latest driver to have matched Stevens’ win total of 72 races with his Late Model victory this past Friday night. Fearn’s feature win was the 55th Late Model win of his career to go along with 17 feature wins from his Pro-Stock days at Stafford. Fearn is now tied with Stevens for 3rd place on the all-time winners list, 5 wins behind Woody Pitkat and 59 wins behind Ted Christopher.

“The stats are there and it’s great to be up there with Teddy, Woody, and Bugsy,” said Fearn. “It’s a great list of names to be a part of but my career isn’t over yet so I’m looking towards the next one. I remember coming here as a 14 and 15 year old and watching Bugsy mop up on the field in the Wood Chopper #15 with a Ford motor for a couple years and everyone wanted to know where he got that Ford motor. I’ve been around for a long time and I’m showing my age, but we just need to keep on doing what we’ve been doing and move ourselves up as far as we can.”

“I always say races are won in the shop and I have the best crew in the Stafford pits,” said Fearn. “We work hard on the car during the week and that makes my job easy when we go out on the track.”

Fearn’s most recent feature win was a perfect example of his crew’s handiwork. Fearn’s #92 was damaged in the July 26 feature and the team spent some long hours leading into last Friday night’s Late Model feature to not only have the car ready to race, but ready to resume its winning ways. 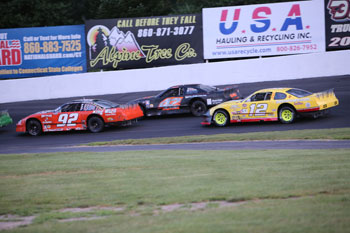 “We were up until 1 in the morning [Thursday] night putting the car back together from last week and I have to thank my crew, they were there with me until 1 and it was a lot of work putting it back together,” said Fearn. “We also have a lot of great partners that help us get to the track every week between King Ward Coach Lines, SAFCO Foam, Sun Valley Fire Equipment, Whip’s Sporting Goods, JR Sweeping, Joe Hamm Chassis, R.A.D. Auto Machine under the hood, John Williams and Buzzy with the drivetrain, Hoosier Tire, and Independent Wheel.”

Fearn shows no signs of slowing down any time soon in his pursuit of more wins to add to his career total, but there is a point in time where Fearn would consider hanging up his helmet. 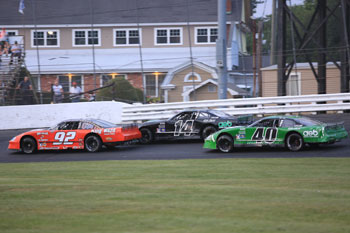 “I don’t want to pass Teddy, he was the king here at Stafford,” said Fearn. “I guess if I ever got that close to him maybe that would be the time for me to retire.”

Fearn’s 7 wins this season have him comfortably leading the Late Model standings entering this Friday night’s August 9 NASCAR Weekly Racing program by 92 points over Michael Wray, a margin that is nearly equal to two race wins. Stafford’s SK Modifieds®, SK Lights, Limited Late Models, and Street Stocks will join the Late Models in feature action. Tickets for this Friday night’s NASCAR Weekly Racing program are priced at $20.00 for adult general admission tickets, $5.00 for children ages 6-14, and children ages 5 and under are admitted free of charge when accompanied by an adult. Reserved seat tickets are $23.00 for all ages. All ticket prices include 10% CT Admission Tax. Stafford Motor Speedway offers plenty of free parking along with overnight parking available for self contained Recreational Vehicles.