(Stafford Springs, CT)—As the days continue to tick away and count down towards the start of the 2018 season, Oxford, MA native Troy Talman has announced he will team with Steve McCarthy for the 2018 SK Modified® season at Stafford for a run for at the championship behind the wheel of the #2 SPM Motorsports machine. The McCarthy/Talman combination has deep roots as McCarthy is longtime family friends with Talman’s family. 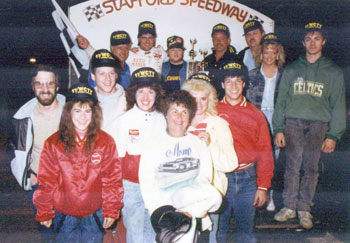 “I grew up with the Tagg family and in 1988 I helped out Tom Tagg in the Late Model division and Mike Talman was also part of the crew and that was before he married Sharon (Tagg),” said McCarthy. “I started talking with Troy when he was racing Keith Rocco’s cars at Thompson and Paul Pytko actually got the two families together to talk things over and now here we are.”

“It’s really cool, our families have known each other for a long time,” said Troy Talman. “We’ve been talking with Steve for a while now, I’ve always had my eye on Steve’s car whenever I saw it around town and thought it would be cool to one day drive it. I think we have the potential to be something really good, The car is a CD chassis and we have a new T/A Engine.” 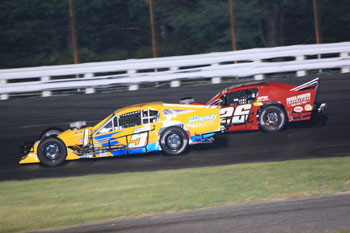 Talman, a graduate of Stafford’s SK Light Modified division, won’t enter the 2018 season totally blind as he made 3 starts in McCarthy’s #26 machine during the 2017 season. While the combination missed out on top-10 finishes in their three starts, the car was fast on the speed charts and Talman says it’s all about maintaining their speed throughout a race night.

“Those couple races we ran last year will be a big help because we got to know each other, how Steve sets the car up and how I drive the car,” said Talman. “We already have good communication and I think communication is a crucial part of any successful race team. It would be awesome if we could show up and be in the top-5 right away at the Sizzler. We had some speed last year in the couple of races we ran, we just have to maintain the speed we showed in practice throughout a night.”

Whereas most drivers have goals or expectations for a brand new race season, Talman is looking to take things one race at a time and see how things go. One thing Talman is sure of is the high level of competition he will face to put the #2 machine in NAPA Victory Lane.

“I’m not really big into setting preseason expectations,” said Talman. “I like to go race to race and do the best we can. Only time will tell if we can be a contender. The competition will be at an elite level this season, which it always is at Stafford. When you show up to Stafford, you really have to be on your game and have all your ducks in a row. It’s the cream of the crop when you get to the front at Stafford in the SK Modifieds® and if you can do that, you’re at the top of the New England racing level. There’s no reason why we can’t do that this season. I think we had a good start with the couple races we ran last year and we just need to continue to trend in the right direction.”

Should Talman be able to pull off a victory this season, it would be a special moment for everyone involved.

“If we could get a win this season, that would mean that we arrived,” said Talman. “If we can have a top-5 car speed wise, there’s no reason why we couldn’t hang around one night and be able to sniff out a win. A win would be huge for us and winning is why we go racing.” 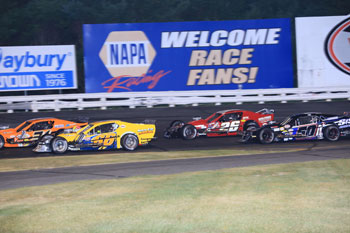 Steve McCarthy has the same sentiment when it comes to victory lane at Stafford.

“My son Michael, who is Troy’s car owner, really pushed to get Troy in the car and he’s seen photos from back in the day in victory lane at Stafford and it would be special to be able to win a race with him as part of the crew,” said McCarthy. “I’m sure the look on his face would be priceless if we could get a win this season. He’s heard all the stories about how we used to win races and he wants to have his own story in victory lane at Stafford.”

Talman will have Digital Federal Credit Union (DCU) as a sponsor and the team is in search of additional marketing partners for the 2018 season.

“I’d like to thank DCU for continuing to support me,” said Talman. “They’ve been with me since my SK Light days and we’re on the hunt for more sponsors to help us get through the season.”

Talman and McCarthy will kick off their 2018 season at the 47th Annual NAPA Auto Parts Spring Sizzler® on April 27-29. Tickets for the “Greatest Race in the History of Spring” are on sale now at the Speedway Box Office. Tickets are priced at $40.00 for adult general admission tickets, $5.00 for children ages 6-14, and children ages 5 and under are admitted free of charge when accompanied by an adult. Reserved seating is priced at $42.00 for all ages. As always, Stafford Motor Speedway offers free parking with overnight parking available. All tickets are good for both Saturday and Sunday admission. All ticket prices include 10% CT Admission Tax. Discount tickets will be available in March at participating NAPA Auto Parts stores.

For more information on the 47th Annual NAPA Auto Parts Spring Sizzler®, or to order tickets, contact the Stafford Motor Speedway track office at 860-684-2783 or visit us on the web at www.staffordmotorspeedway.com.