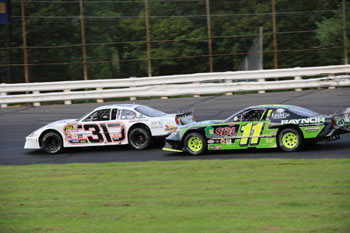 (Stafford Springs, CT)—Friday night, July 28 at Stafford Speedway saw Hatfield, MA native Tyler Leary score his very first career Late Model feature victory. Leary came to Stafford as a rookie in 2016 and although he scored 12 top-10 finishes, he didn’t record a single top-5 finish. Fast forward to the 2017 season and Leary has three top-5 finishes in 8 starts prior to his victory. It was only a matter of time before Leary and his #11 Amherst Trucking team found their way to NAPA Victory Lane at Stafford.

“The win was huge for us, especially after struggling for so long last season,” said Leary. “Our best finish last year was a seventh and this year we had 2 top-5’s leading up to the win and the win made it three top-5’s in a row.” 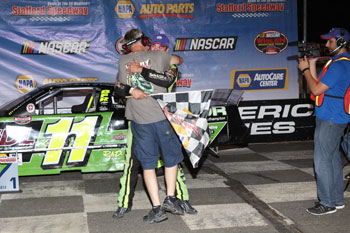 With his lack of results in his first season and a half of Late Model racing, Leary was starting to wonder if a win at Stafford would ever be in the cards for himself and the #11 team.

“As a driver it definitely felt that way,” said Leary. “I would come back into the pits after a feature and I would say to myself ‘I don’t know if the car is capable of winning’. We had a lot of late nights at the shop changing things and sometimes we’d hit on something and make the car better and sometimes we made the car worse. My dad was always there and he always had my back and he was sure the car would win, so we kept working at it and with some help from Bob Fill, we finally got the car into winning form. Tires play a huge role at Stafford and we figured some things out with our stagger and car setup. We didn’t throw one big setup thing at it, we just tried a bunch of small things and I think the car has finally found its comfort zone. I can run the same lap times lap after lap and it’s good on old tires as well.” 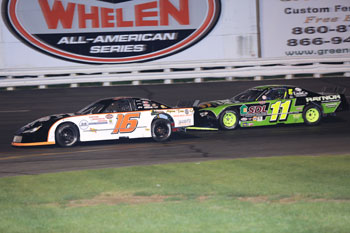 Leary’s feature win moved him into a tie with Josh Wood for sixth in the Late Model points standings. With 9 races left in the 2017 season and a 56 point deficit to make up, Leary knows he is a longshot for the championship. With his first win now under his belt, Leary says his focus is now on winning more races and that anything can happen in the championship race.

“Everyone always says the first win is the hardest and now that we have the first one out of the way, we can concentrate on trying to win more races,” said Leary. “We had a bad start to the season and if not for that, I think we could be right up there fighting with those guys for the championship. We’re still racing for points, but the goal is to win more. We still have half the season left and anything can happen. A top-5 finish for us would be ideal. I’d really like to thank all my sponsors for their support, BFR for the chassis, Donny Wood at R.A.D. Automachine for the motor, Rich Bushey Signs, Amherst Trucking, Raynor Garage Doors, SDL Home Improvement, Erasable Images Powerwashing, LashCo Tree Service, Mass Wheel Works, Valley Recycling, Szawlowski Potato Farms, Kix 100.9, JB Auto, NAPA Auto Parts, Tom’s Hot Dogs, and all the track sponsors, NAPA, Mr. Rooter, 32 Signs, and CBYD 811, all these people make racing so much more enjoyable and the bonus money when you finish up front definitely helps.” 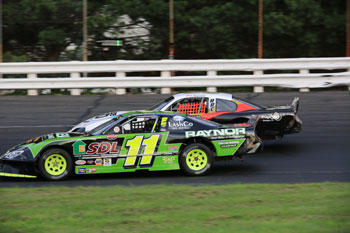 Drivers often speak of strange things happening while they’re on their way to a first victory and Leary was no different with many thoughts racing through his head. Leary was surrounded by the top dogs in the Late Model division with Glen Reen, Tom Fearn, Michael Bennett, and Michael Wray all around him, but Leary was able to stay clear of them over the final laps.

“We took the lead when Glen Reen and Michael Bennett got together but we had Kevin Gambacorta outside and Michael Wray behind us, which when you see those guys in your mirror and alongside you, it makes you worry about the restart,” said Leary. “Those are the best guys that run at Stafford but I wasn’t really nervous as much as I knew I had to have a good restart, which I did. After that, I think those guys trying to pass each other slowed them down a little so we had some smooth sailing. All I had to do was be smooth on the gas and not make a mistake. I had so many things going through my mind. I was hoping something didn’t break and I didn’t make a driver error, it was kind of crazy. I think my lap times slowed down 2 or 3 tenths a lap but I knew I was in the clear and all I had to do was drive it across the line.”

Leary will look to make it 2 wins in a row this Friday night with the NASCAR Whelen Modified Tour joining Stafford’s weekly divisions in the Stafford 150. Tickets for the August 4 Stafford 150 are available and on sale now at the Stafford Speedway Box Office. Tickets are priced at $35.00 for adult general admission tickets, $5.00 for children ages 6-14, and children ages 5 and under are admitted free of charge when accompanied by an adult. Reserved seat tickets are $37.00 for all ages. All ticket prices include 10% CT Admission Tax. Stafford Motor Speedway offers plenty of free parking along with overnight parking available for self contained Recreational Vehicles. Stafford’s five NASCAR Whelen All-American Series divisions will join the NASCAR Whelen Modified Tour cars in feature action.