Posted on January 25, 2019 by Scott Running Posted in News 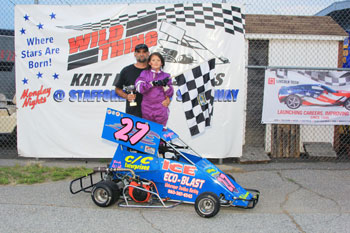 (Stafford Springs, CT)—When Stafford Speedway’s Late Model division takes its first green flag of the 2019 season at the NAPA Spring Sizzler®, scheduled for April 26-28, a familiar face will be returning to the ranks. After a 2-year layoff, Uncasville, CT native Scott Cook will back behind the wheel of his #27 Erasable Images Powerwashing Chevrolet. Cook won Rookie of the Year honors in 2001 and he raced Late Models through the 2016 season. After making selected Limited Sportsman starts at Thompson and Waterford over the past several seasons, as well as racing on Monday nights with his daughters Sydney and Peyton, Cook is ready to come back to the Stafford half-mile.

“I’ve stayed busy racing a couple times at Waterford and racing at Thompson was really where I got the itch to come back to Stafford, which is the track I prefer racing at,” said Cook. “I talked with Tom Butler, Stu and Tom Fearn and they all encouraged me to come back. I’m excited for this season. My daughters Sydney and Peyton have been kart racing on Monday nights and doing well there, I got Chase started in the Late Models, and I still have the competitiveness inside me to go racing. The other thing that got me wanting to race again was how well Tyler Leary has run the past 2 seasons since that’s my old #5 car. After seeing how well he’s done and knowing we have a good car, why not come back? I love racing at Stafford, the Arute’s put on a great show, Tom Fox and Scott Tapley do a great job with the drivers, and Stafford has the best competition. Out of the three tracks I’ve raced, Stafford is my favorite.” 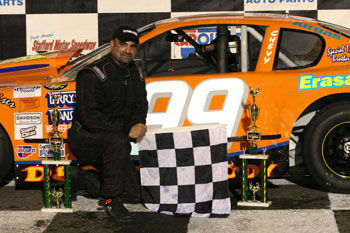 Cook will return to the Late Model ranks with a Mike Quintiliano car that he ran during the 2016 season at Stafford. Cook is looking to establish himself as a consistent top-5 car on a week to week basis and he has enlisted former Stafford track champion Jay Stuart to help with his chassis setup as well as finding some extra crew help and sponsorship.

“The car is an old Mike Quintiliano car but it only has about 9 races on it,” said Cook. “Mike ran a couple of races with it and did pretty well. Jay Stuart has gone through the car and it’s been great to work with him again as well as Donny Wood from R.A.D. Auto Machine. I think those 2 things are going to make the difference for us this season as we were lacking a little in the chassis department. If we can be a consistent top-5 car, we’ll have a shot at winning some races. It’s going to be tough competition with Tommy Fearn, Tyler Leary, Kevin Gambacorta, Adam Gray and the Saunders twins to name a few. The field is definitely looking stout.. It’s been a few years since I’ve been in the car so I’m looking for consistency this year. If you can put yourself in the top-5 every week and have an opportunity then wins will come. The biggest thing for me right now is I’m looking for a spotter and some extra sponsorship. Stu Fearn and SAFCO Foam are going to be helping us out with some tires this season so a big thanks to him. Anyone looking to help us out this season can call me at 860-367-4545.”

With Cook placing his focus on consistency during the 2019 season, he would like nothing more than to get back to NAPA Victory Lane. Cook’s lone Late Model feature win came back on June 1, 2007 and although he has come close to a second win, it has yet to materialize. 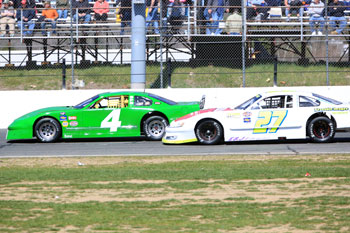 “A win would be icing on the cake for me,” said Cook. “I can still remember the night we won and the celebration we had. It was a great feeling to have, especially winning a race at such a prestigious track like Stafford. We won a couple of the Late Model 16 races, so it wasn’t our first time in victory lane, but it was the first 30-lap main feature that we won. They always say the first win is the hardest, but it seems like it’s been harder for us to get back to victory lane a second time. I want to say I’ve been in position to win a race 8 or 9 times since then but I’ve lost the lead with late cautions. I lost the Spring Sizzler twice, Dillon Moltz beat us once and then Woody Pitkat beat us the other time. We’ve usually been pretty good on opening day so hopefully we can have another good start to this season.”

As well as getting back to NAPA Victory Lane himself, Cook says the next best thing would be able to share the podium with his son Chase. 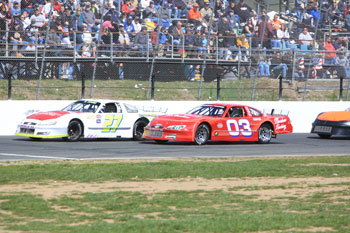 “That would be awesome,” said Cook. “That’s a goal that we’ve talked about the last couple years and now that I’m back into racing, we’ll see if Chase and I can share the podium.”

In addition to his Late Model duties, Cook will once again be helping his daughters Sydney and Peyton on Monday nights in the Wild Thing Kart Series. If things play out right, Cook says his daughters could one day be racing in a weekly division at Stafford.

“I love Monday nights with my daughters,” said Cook. “Wade Gagner and his family do a great job with the Wild Thing Karts and I love being able to spend time with my kids and seeing them do well. Sydney almost won a championship and both her and Peyton have won races. In four years I think they’ve combined for about 20 feature wins so far so they’re doing well. I wouldn’t mind seeing either of them racing one day in the SK Lights. I’ll support them with whatever they want to do.”