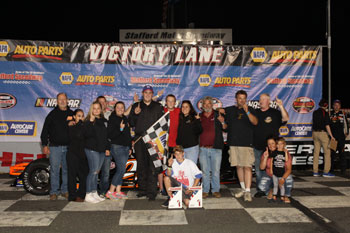 (Stafford Springs, CT)—For Stafford Springs native Wesley Prucker, getting to Stafford Speedway’s NAPA Victory Lane has been a long-time coming.  After 5 seasons behind the wheel of his #22 Accu-Rite Tools & Mgf. SK Light Modified, Prucker and the #22 team struck gold, winning their first race at Stafford.  Prucker, who has had a strong start to the 2017 season by leading the highly competitive SK Light Modified point standings for multiple weeks, was ecstatic to finally get to NAPA Victory Lane.

“This is my fifth season in the SK Lights and we finally got our car down thanks to Ed Bagot,” explained Prucker. “He knows more than I could ever imagine about modifieds.  Before, it was just me and my dad, we could win a heat race, but couldn’t come close to winning a feature. Winning a race, it’s by far the happiest I’ve ever been.  My sister even said to me after she saw pictures of me online that I never smile that big, even when we went to DisneyWorld.  I’m finally on the winners list at Stafford.  I’ve been coming here basically since I was born, watching Eric Berndt from the stands. I actually have a picture in victory lane with him when I was about 2 years old and now I have a picture of myself in victory lane.” 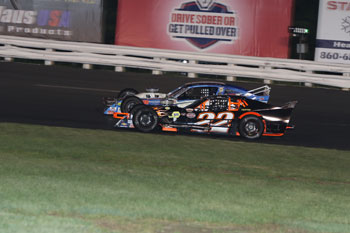 Prucker has been racing since the ripe age of 5 and he has had success in other forms of racing as a youngster, notching countless wins behind the wheel of a quarter midget.  After making the jump to SK Light modifieds for the 2013 season, the two-man operation of Wesley and his father Geoff were excited for the new challenge yet still expected the success they had found in the quarter midget ranks to continue.

“I started racing when I was five in quarter midgets,” continued Prucker.  “We won a lot of races and then we came here thinking we were going to continue our success and be as good as everyone else here and we got our butts kicked.  It’s not as easy as it looks.”

Just 7 races into the 2017 season it looks as though Prucker and the #22 have hit on something as they have posted some impressive stats including 1 win, 3 top 5’s, and 5 top 10’s.  Prucker currently sits 2nd in the SK Light point standings just 22 points behind George Nocera.  After cracking through to grab that first career win, Prucker is looking forward to the remainder of the 2017 season. 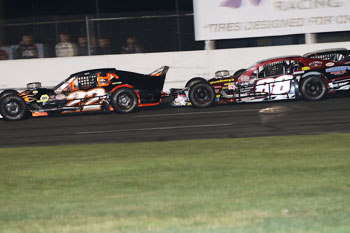 “My confidence right now has to be double what it was, winning that race was a giant monkey off my back,” continued Prucker.  “Now that we’re heading in the right direction and we know we can win races, we’re going to keep on going, we’re looking for more wins.  I’m not even going to put my head in the points race right now.  We went from second back to fifth when we had a bad night so I’m not even thinking about points, just focusing on getting good finishes.  Maybe when there’s two or three races to go I’ll start looking at it.”

Like many of the teams in the Stafford paddock the #22 SK Light team is a family operation with Wesley and his father turning the wrenches week after week.

“Big thanks to my Mom and Dad for always being there for me, Eddie and Ed Bagot for all their help, the crew, Jeremiah, Sam, Billy, Ashley and Shannon, and Accu-Rite for coming on board with us this season, and Casagrande Builders for their support.  It was really nice to be able to get a win in only our second or third race with them on the car.” 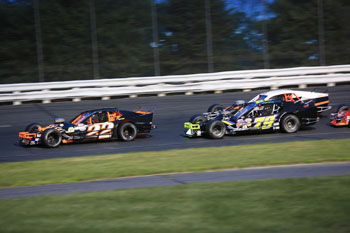 Prucker and the deep SK Light Modified division are back this Friday, July 14th for the Girls Night Out / Intrepid Fallen Heroes Fund Track Walk event. Tickets for this event are available and on sale now at the Stafford Speedway Box Office. As part of Girls Night Out, ladies general admission tickets are only $10. Regularly priced tickets are priced at $17.50 for adult general admission tickets, $5.00 for children ages 6-14, and children ages 5 and under are admitted free of charge when accompanied by an adult. Reserved seat tickets are $20.00 for all ages. All ticket prices include 10% CT Admission Tax. Stafford Motor Speedway offers plenty of free parking along with overnight parking available for self contained Recreational Vehicles. In addition to the on-track action, fans and racers alike can walk the track during the Intrepid Fallen Heroes Fund Track walk hosted by NAPA Auto Parts. The track walk requires a donation of $10 with 100% of the proceeds going to benefit the Intrepid Fallen Heroes Fund Track. NAPA Auto Parts will also have a booth set up at the main gate with raffle prizes available.

“I feel like right now I just have to drive as hard as I can and be aggressive and keep on doing what we’ve been doing,” said Prucker.  “I’d like to win all of the remaining races but I know we can’t do that.  I would like to win at least one more race when my Mom can be here to watch.”