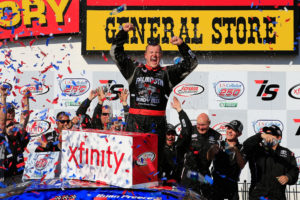 DAYTONA BEACH, Fla. — He’s sitting sixth in the championship points at the halfway mark, having missed a race earlier in the season, and trails leader Rowan Pennink by 39 points.

But there is nobody with more momentum on the NASCAR Whelen Modified Tour heading into Friday’s Stafford 150 than Ryan Preece.

A large part of that has to do with what the Berlin, Connecticut, driver accomplished outside the tour. The 26-year-old NASCAR Next alum followed up a runner-up finish in the NASCAR XFINITY Series race at New Hampshire Motor Speedway in mid-July with a career-breakthrough win at Iowa Speedway. And now he returns to the tour, where he’s collected three wins — including the non-points Whelen All-Star Race at New Hampshire — a second and a fourth over his last five starts.

Preece, who missed a race to get married, still has a lot of ground to make up over the last nine points races. Rowan Pennink has guided the iconic ‘Ole Blue’ No. 3 at the top of the championship standings on the strength of a win and seven top 10 finishes in the seven races. Pennink holds a slim seven-point advantage over three-time race winner Timmy Solomito. Eric Goodale, Max Zachem and Justin Bonsignore are all within striking distance, followed by Preece and four-time champion Doug Coby.

The race also begins a tough stretch for teams on the Whelen Modified Tour. A quick turnaround will see a stop at Thompson Speedway Motorsports Park just five days later and then a stop at Bristol Motor Speedway just seven days after that. 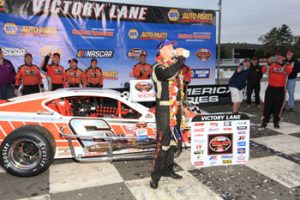 The Race: The Stafford 150 is race eight of 16 on the Whelen Modified Tour points schedule, marking the halfway point of the season. It is the second of three stops at the half-mile. Ryan Preece won the Spring Sizzler at Stafford back on April 30. The only other appearance will take place as part of the Fall Final on October 1.

The Procedure: The maximum starting field per the entry blank is 31 cars, including provisionals. The first 25 cars have secured starting positions through the group qualifying process, while the six remaining spots will be awarded through the provisional process. The race is scheduled for 150 laps (75 miles).

The Track: The Stafford Motor Speedway has held 123 Whelen Modified Tour races in history, including this year’s Spring Sizzler. The first event at Stafford was in 1985. Richie Evans scored the victory in the inaugural race.

Race Winners: There have been 32 different tour winners at the half-mile, including Mike Stefanik, who leads all drivers with 20 career wins at Stafford. Ryan Preece won the Spring Sizzler at Stafford earlier this year, which was his sixth career win at the track. Jimmy Blewett is the defending winner of the Stafford 150. 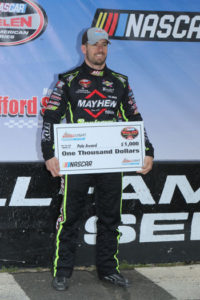 Coby Starting To Heat Up: A pair of finishes outside the top 10 to start the season left Coby in an uncharacterstic hole to start the year. He’s dug his way out to get into the top 10, with three top fives in five races since. Coby will look to Stafford to continue to right the ship. He has won the last six Coors Light Pole awards and seven of the last eight at the half-mile. He broke the track record back in April.

Pit Stop Strategy: The Stafford 150 will see some different tire rules that could throw a wrench in the plans of some teams. Crews can change up to four tires during the race, but they can only change one tire per stop. The different rules could create some interesting strategy from crew chiefs on when to bring their driver down pit road. The decisions made could decide who rolls into the winner’s circle.

New Venture For Lutz: Craig Lutz will sit behind the wheel of the Goodie Motorsports No. 46 for the Stafford 150. Lutz, who has four career top-10 finishes on the NASCAR Whelen Modified Tour, replaces Woody Pitkat in the ride after Piktat and team owner Jeff Goodale parted ways following the race at New Hampshire Motor Speedway. Lutz has two of his top-10 finishes at Stafford, including a seventh place run in this year’s Spring Sizzler on April 30. He has been running his family-owned No. 56 this season and the seventh at Stafford is his only top-10 of the year. 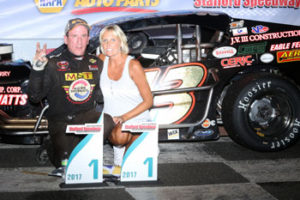 Christopher Searching Victory: With 94 career Stafford starts, Ted Christopher surely knows his way around the half-mile oval. Better yet, he is the all-time wins leader at the track in NASCAR Whelen All American Series action. In Whelen Modified Tour action, Christopher has 12 wins, with the last of them coming in 2011. Christopher also has 31 top fives and 53 top-10s on his resume. His 12 wins at Stafford are the most among active drivers and only trail Mike Stefanik all-time. This season, Christopher teamed with Danny Watts for the rest of the season behind the wheel of the No. 82 Horton Avenue Materials Chevrolet. He will be trying to put Watts in Victory Lane for the first time since Ron Silk drove the car to glory in early 2016.

Goodale Looking To Seal The Deal: Back in the Spring Sizzler, Eric Goodale was one of the cars that had a chance to capture the victory. He started fourth in his No. 58 GAF Roofing Chevrolet and finished fourth, while leading three laps in the final stages. This season, Goodale is putting together the best performance of his career, with five top-10s and three top-fives in the first seven races. His consistency has him third in the championship standings, just 22 points from the lead. His two career wins have come at Bristol and Riverhead, but he will be looking to add the famed Arute-family owned oval to his list.

The Stafford SK Modifieds® will compete in a 40 lap feature on Friday night. Keith Rocco, Ted Christopher and Rowan Pennink are just a few of the names that compete in the class. Rocco currently leads the division point standings. The DARE Stocks, Late Models, Limited Late Models and SK Light Modifieds will also compete in feature racing on Friday.