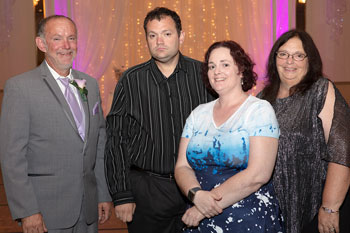 (Stafford Springs, CT)—Stafford Motor Speedway has announced that the Gagner Family from Wild Thing Kart Series have been named as Grand Marshals of the 46th Annual NAPA Fall Final. The Gagner family, Wade, Sandi, Tracy, and Greg, will get the Whelen Modified Tour field fired up and send them on their way to the green flag with the most famous words in motorsports.

“It’s pretty cool for us to be named the grand marshals,” said Wade Gagner. “Wild Thing Karts is a family endeavor. It’s my wife Sandi, my daughter Tracy and my son Greg, they’re all part of the series. I’m the race director, Sandi does the front gate, Tracy does photos, and Greg works the parts truck. We’ve all had a hand in running this series for the past 13 years. It’s all four of us that have made this work. This will be the first time we’ve ever been Grand Marshals and I’m pretty sure my wife is going to flip out when she hears this news.” 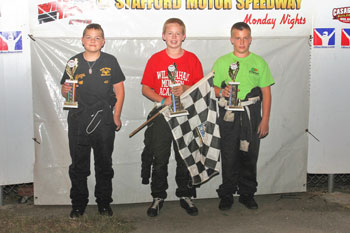 The Wild Thing Kart series competes on Stafford’s mini-mile Monday nights during the Summer months. Weekly, 7 different divisions compete from the Tiger Cubs with drivers ages 5-7 all the way up to Sr. Outlaws, Sr. Champs, and Pro 2 Modifieds, all ages 15 and up. The Wild Thing Kart Series has produced over 30 graduates that are now racing at Stafford on Friday nights.

Wild Thing Karts graduates are not only winning races at Stafford, but championships as well. This season, three of Stafford’s five NASCAR Whelen All-American Series track champions are Wild Thing Kart graduates. SK Modified® Champion Ronnie Williams and Street Stock Champion George Bessette, Jr. are both graduates of the Monday night program while Bryan Narducci and Marcello Rufrano who are competing for the SK Light track champion are also former Kart competitors. The championships aren’t just confined to the 2018 season with Cory Casagrande taking the Limited Late Model title in 2012 and Frank L’Etoile, Jr. winning back to back DARE Stock titles in 2014-2015. 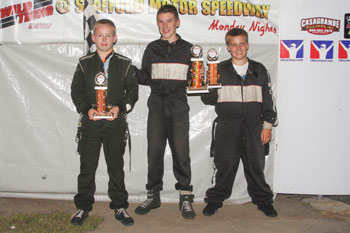 “It’s pretty cool to see our graduates winning races and now that they’re starting to win championships that’s even better,” said Gagner. “It makes you feel pretty old when you’ve seen them racing go karts and they didn’t know what they were doing and now they’re winning races and championships on Friday nights. It’s also pretty neat to look back when we’ve run special events we’ve had drivers like Teddy Christopher and Ryan Preece driving our karts. Our drivers aren’t just racing at Stafford either, we have drivers like Devin O’Connell in Granite State ProStocks, Peter Portante is racing Formula Atlantic and F2000, and Eric Penza is now a crew member for BK Motorsports in the NASCAR Monster Energy Cup Series. Sometimes drivers figure out that racing might not be for them and things would work out better for them as crew members.” 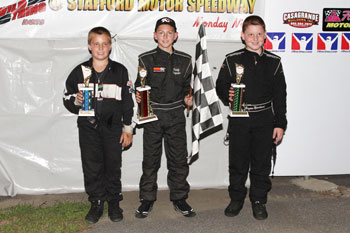 The Wild Thing Kart Series just completed its 13th season of competition at Stafford. The series began back in 2006 when Gagner and Chris Kopec approached Mark Arute about the possibility of running the karts on Monday nights around the mini-mile. With over 30 drivers finding their way to Stafford’s Friday night program, the series shows no signs of slowing down and will continue to provide a pipeline for young drivers to make the move up to weekly competition one day.

“We got started in 2006 and it was Chris Kopec and myself who went to Mark [Arute] to see if he would be interested in doing a go kart program,” said Gagner. “I don’t think it would have happened without Chris really selling Mark on the idea that this would be a great building block for the Friday night program at Stafford. Chris was really instrumental in getting the Wild Thing Karts started. As long as we can still physically do this, we have no end in sight. We’re still going strong and we plan to be for much longer.” 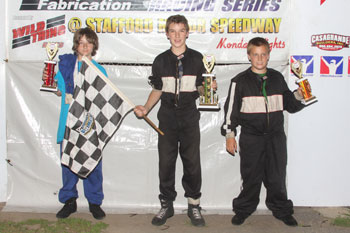 “The competition in the Wild Thing Karts at Stafford is amazing,” said Mark Arute, Stafford Speedway COO/GM. “Wade, Sandi, Tracy and Greg do a phenomenal job organizing and running the events. Their events are exciting and competitive and an overall fun experience for the families that compete. I recommend anyone that has an interest in racing to get involved through the Wild Thing Kart series as it prepares the young racers for a higher level of competition and success. Stafford is very fortunate that Wade and Chris presented this concept to us 13 years ago.”

For kids looking to get started in racing, it doesn’t get much simpler than Wild Thing Karts. The Gagner family runs the series and build the kart chassis, so one call to Wade is all it takes to get started. 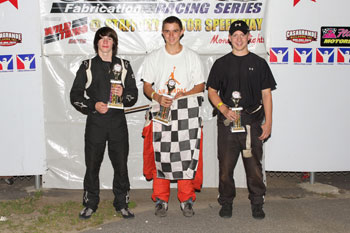 “Getting started with Wild Thing Karts is the easy part,” said Gagner. “We’re not a club so you can just show up with a kart and go racing. I run the series and I build the karts, so we’re pretty much a one stop shop. If you contact me, you can either get a new kart or I can direct you to someone who is selling a used kart. We’ve had a lot of feedback from drivers from other series who have come to race with us because we emulate what happens at Stafford on Friday nights. We run the program the same way so it’s a real good training program to let the kids know what they’ll be getting into once they move up to Friday night competition. For a brand new race ready kart it’s around $4,000 and you can get a used kart for about half that. We’ve used the same chassis design for 13 years so it doesn’t really matter if you have a new or used kart. We have a Facebook page and a website at www.wildthingkarts.com and my contact info is on there.”

Tickets for the 46th Annual NAPA Auto Parts Fall Final Weekend are priced at $40.00 for adult general admission tickets, $5.00 for children ages 6-14, and children ages 5 and under are admitted free of charge when accompanied by an adult. Reserved seating is priced at $42.00 for all ages. All NAPA Fall Final tickets are good for admission on both Saturday and Sunday and ticket prices include 10% CT Admission Tax. Discount tickets are available at your local participating NAPA Auto Parts Store. The NAPA tickets include general admission for both days along with a luncheon buffet on Sunday, all for only $38 per person. For a list of participating NAPA Stores, please click the PARTICIPATING NAPA STORES link found at the top of the www.staffordspeedway.com homepage.