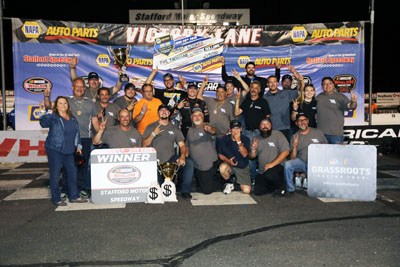 (Stafford Springs, CT)—In the short history of the NAPA Auto Parts SK 5k, no team has been as dominant as the #50 Les’s Auto Center Ford driven by Ronnie Williams.  Williams is thus far the only driver to have won the race twice through the first 6 NAPA SK 5K events with his wins have come in consecutive seasons.  Williams comes into the 2020 NAPA SK 5k looking for his 3rd win in a row in the extra distance classic while the #50 team is looking for their 4th consecutive win in the race as Chase Dowling won the race in 2017 driving for the same team.  The last time a car other than the #50 car won the race was 2016 when Ted Christopher claimed the checkered flag.

“It’s just how Adam [Skowyra] and all the guys in the shop prepare the car,” said Williams.  “We’ve always had a good long run car and with the race being 100 laps long, we have speed at the end of the race and that’s what you need to win.  We’re looking to come back and do what we’ve been doing in the NAPA SK 5k.  The 50 guys give me a fast car every week and I’m sure we’re going to be a contender, we just have to avoid getting into any wrecks.  We’d like to avoid what happened last year when we damaged the car a little but were still able to come back and win.  I’m definitely looking forward to this race, I’m feeling pretty good and I want to win this race more than ever.” 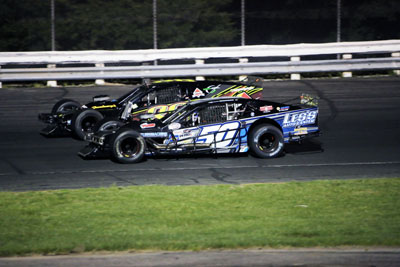 Any time a team demonstrates overwhelming success, it paints a bull’s-eye on that team as the ones to beat.  Williams says he’s sure that both he and the #50 crew fall into that category, but they’re not going to let that distract them from the task at hand.

“I’m sure people are looking at us as the team to beat,” said Williams.  “It’s hard to not look at the 50 car with the success we’ve had in this race the last 3 years.  We’re not too worried about other people, we’re just focused on what we need to do.  Our plan for that race is to not worry about what happens in the first 50 laps and not worry about what guys like Keith [Rocco], Todd [Owen], or anyone else is doing.” 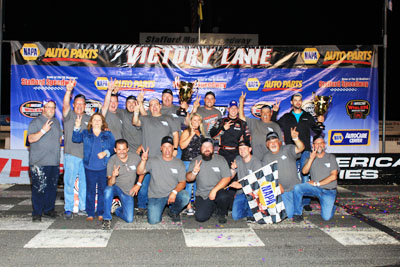 “We’re getting there,” said Williams.  “The first couple weeks we had fast race cars but we didn’t have winning race cars.  We haven’t panicked, we’ve just concentrated on making the right adjustments and that I’m communicating well with Adam [Skowyra] as to what the car needs to be better.  The Friday night we won, we weren’t very good in practice but Adam went back and did some homework, I made sure to tell him what I needed and we just keep on getting better and better and into our rhythm.  The last couple years we’ve started off getting on a roll after the SK 5k race.  Last year we didn’t finish outside the top-6 after we won the race and we’d like to do that again and finish the year out strong.”

With Williams serving as the only driver to have won the NAPA SK 5k twice, he would like nothing more than to continue his success in the biggest race of the SK Modified® season and continue to enter his and the #50 team’s names into the Stafford record books. 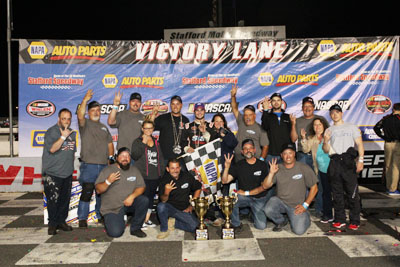 “There’s no one else that has won the race twice, so to win 3 in a row would mean a lot to me and the crew,” said Williams.  “It’s the biggest race of the season and everyone in the SK Modified® division wants to win this race.  If we could come out on top again it would be a huge accomplishment and another milestone for the 50 team.  We know it’s going to be a challenge to win this race again.  Hopefully we can end up back in victory lane for my third time in a row and Adam and the team’s fourth time in a row.”

The 7th Annual NAPA Auto Parts SK 5K is set for this Saturday, August 8.  Tickets for the NAPA SK 5K are available and on sale now through the Stafford Speedway website.  Tickets are priced at $30.00 for adult general admission tickets, $10.00 for kids ages 6-14, kids 5 and under are admitted free of charge when accompanied by an adult, and paddock passes are priced at $50.00.  Stafford Speedway is limited to 25% capacity and there are still a limited number of tickets available for purchase.

Fans who cannot attend the race in person but would still like to watch the race can order a live stream of the event from www.staffordspeedway.tv.  Fans can purchase the NAPA SK 5k event for $30 or there is a combination deal that includes the Friday, August 7 NAPA Auto Parts Open Modified 100 as well as the NAPA SK 5k on Saturday for $45.