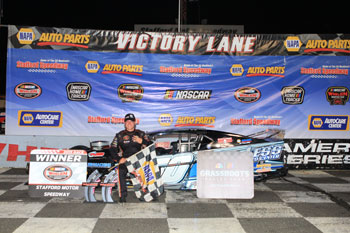 With 10 laps complete, DiMatteo was still in command of the race with Christopher second, Talman third, Arute fourth and Rufrano in fifth. Michael Gervais, Jr. was all over Rufrano’s back bumper in sixth with Joey Cipriano, Andrew Molleur, Ronnie Williams, and Stephen Kopcik making up the top-10.

Gervais finally took fifth from Rufrano on lap-13 while DiMatteo was stretching out his lead over Christopher, who in turn had a comfortable margin back to Talman in third. DiMatteo was still comfortably in front of Christopher at the halfway point of the race with Talman and Arute behind them. Cipriano was now in fifth with Williams, Gervais, Kopcik, Glen Reen, and Rufrano making up the top-10.

Williams made a move in turn 3 to take fifth from Cipriano on lap-29 as DiMatteo and Christopher were still setting the pace out front with Talman and Arute behind them. Christopher was slowly starting to reel DiMatteo in and with 9 laps to go the margin between the two leaders was one second. Cipriano’s car appeared to lose an engine to bring the caution out with 36 laps complete and set up a four lap sprint to the finish.

DiMatteo took the lead on the restart with Christopher behind him in second. As the cars hit turn 3, the two leaders touched and spun, collecting multiple cars behind them to bring the caution back out with 36 laps complete. This put Williams into the lead for the restart with Gervais in second. The second row would be Kopcik and Keith Rocco with Rufrano and Dan Wesson in the third row.

Williams took the lead on the restart with Kopcik behind him in second. Gervais was third with Rocco fourth and Wesson fifth. Williams and Kopcik touched wheels on lap-38 but kept going while Wesson made a strong move to the inside of Rocco to move up to fourth. Kopcik took the lead coming to the white flag lap but Williams made a power move going into turn 3 to retake the lead and he led Kopcik to the finish line in a thrilling finish. Gervais finished third with Wesson and Rocco rounding out the top-5. 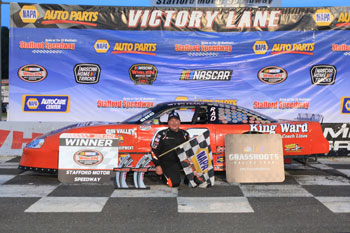 In the 30-lap Late Model feature event, Michael Bennett took the lead at the green with Cliff Saunders taking second. Ryan Fearn got around Darrell Keane to take third with Kevin Gambacorta and Tyler Leary side by side for fifth. Gambacorta took fifth on lap-3 while Ryan Fearn was applying heavy pressure to Cliff Saunders for second. Fearn took second from Saunders on lap-4 while Michael Wray got by Gambacorta to move into fifth.

Wray got loose on lap-8 and that allowed Al Saunders to move into fifth and Tom Fearn sixth as Wray slid back to seventh in line with Bennett still leading Ryan Fearn, Cliff Saunders and Keane. Tom Fearn took fifth from Al Saunders on lap-10 with a pass in turn 3.

Ryan Fearn was all over the back bumper of Bennett for the lead on lap-12 and he nearly made a pass for the lead coming out of turn 2 but Bennett was able to hold him off. Cliff Saunders was now right behind Ryan Fearn, making a three-car train for the lead. Bennett spun coming off turn 4 to bring the caution out with 14 laps complete after contact from Ryan Fearn. Ryan Fearn was sent to the rear of the field for the contact with Bennett.

Tom Fearn took the lead back under green with Cliff Saunders in second, Al Saunders in third, Wray fourth and Arute fifth. Ryan Fearn spun coming out of turn 2 to bring the caution back out with 21 laps complete. Bennett was sent to the rear of the field for making contact with Fearn.

Tom Fearn took the lead on the restart with Cliff Saunders in second. Al Saunders and Wray were side by side for third with Arute in fifth. Arute took fourth from Wray on lap-24 and that move opened the door for Wayne Coury, Jr. to pull alongside Wray in a fight for fifth.

Gambacorta got by both Wray and Coury to move into fifth on lap-29 but Cliff Saunders couldn’t catch Tom Fearn as Fearn took down his third consecutive win and his sixth win in the last 8 Late Model races. Al Saunders finished third with Arute and Gambacorta rounding out the top-5. 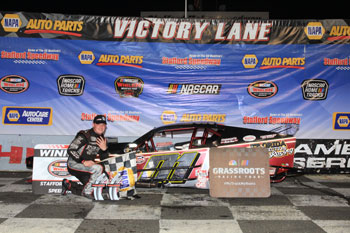 In the 20-lap SK Light feature event, Sami Anderson and Joey Ferrigno went through the infield grass at the start with Amanda West getting into the frontstretch wall, which also collected the car of Nick Anglace to bring the caution out.

Joey Ferrigno shot into the lead on the next start with Mark Bakaj quickly moving up to second. Noah Korner was third with Anderson fourth and Bob Charland and Steven Chapman side by side for fifth. Bakaj took to the outside of Ferrigno on lap-4 to challenge for the lead but Ferrigno was able to maintain the lead. The two leaders were side by side on lap-6 with Korner right behind them in third. Bakaj got clear of Ferrigno on lap-8 to take the lead while Korner was third, Charland fourth and Chapman in fifth.

Korner got by Ferrigno to move into second on lap-12 and Bryan Narducci was on the charge towards the front as he took fifth on lap-16 before the caution came out for a spin by Ethan Durocher in turns 3+4.

Korner took the lead on the restart with Bakaj in second. Narducci moved up to third with Ferrigno fourth and Alexander Pearl up to fifth. Pearl spun in front of the field to bring the caution out with 17 laps complete.

Narducci shot into the lead on the restart but Hodgdon touched wheels with Bakaj to send Bakaj into the turn 3 wall and bring the caution back out and Hodgdon was sent to the rear of the field for the contact with Bakaj.

Narducci again shot into the lead on the outside of Korner on the restart. Chapman moved into second as Korner and Robert Bloxsom, III were side by side for third. Narducci led Chapman to the checkered flag to pick up his third consecutive and fifth overall win of the 2019 season. Bloxsom’s car came up 4 pounds under the minimum weight requirement so he was penalized 4 positions to 8th place. Korner finished third with Jonathan Puleo and Ferrigno rounding out the new top-5. 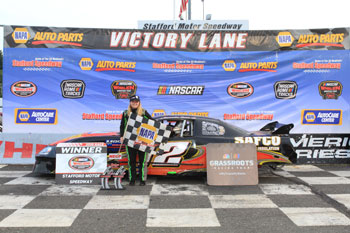 In the 15-lap Limited Late Model feature event, David Tefft led the field to the green and he took the lead on the start. Gary Patnode took second with Alexandra Fearn in third Duane Provost in fourth and Jeremy Lavoie fifth. Kevin Crosby spun on the backstretch to bring the caution out with 2 laps complete.

Patnode took the lead on the restart with Fearn moving up to second. Lavoie took third with Tefft settling into line in fourth and Matt Clement was up to fifth. With 8 laps complete the order was still Patnode in the lead with Fearn, Lavoie, Tefft, and Clement lined up behind him.

Fearn led Lavoie to the checkered flag to pick up her second consecutive Limited Late Mode feature win. Patnode finished third with Clement and Provost rounding out the top-5. 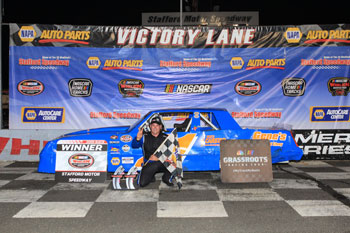 In the 20-lap Street Stock feature event, Dave Secore took the lead at the start with Adrien Paradis, III in second, Jason Lafayette third, Tess Beyer fourth, and Travis Hydar and Meghan Fuller were side by side for fifth.

With 5 laps complete, Secore had started to pull away from Paradis in second while Hydar and Beyer were now side by side for fourth place with George Bessette, Jr. and Fuller side by side for sixth. Hydar got clear to fourth place on lap-8 before the caution came out for a spin in turn 4 by Tyler Trott.

Secore took the lead back under green with Lafayette taking second. Paradis was third with Hydar fourth and Beyer in fifth. Beyer took fourth on lap-9 and now Bessette and Hydar were side by side for fifth as Secore continued to hold the lead with Lafayette right on his back bumper in second. Beyer and Paradis bounced off of each other on the backstretch and almost collected the car of Hydar on lap-12 and Chris Danielczuk’s car came to a stop with smoke pouring from the hood to bring the caution out with 12 laps complete.

Lafayette took the lead on the restart with Hydar taking second. Robinson and Secore were side by side for third but Hydar couldn’t catch Lafayette as Lafayette took down his second win of the 2019 season.