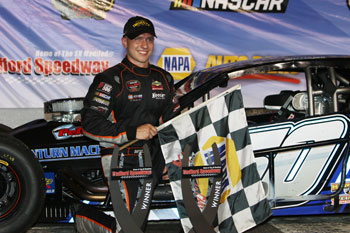 In the 40-lap SK Modified® feature event, Dan Wesson took the lead at the green before the caution came out with 1 lap complete for David Arute who came to a stop in turn 4 and Josh Wood, who had a plume of smoke coming out the back of his car.

Wesson took the lead on the restart with Stephen Kopcik moving up to second. Glen Reen spun in turn 4 to bring the caution out with 3 laps complete.

Wesson and Kopcik went side by side for two laps on the restart before Wesson got clear into the lead with Kopcik slotting into second. Joey Cipriano was third with Matt Galko and Todd Owen making up the top-5. Cipriano made a move to take second on lap-7 and he took the lead from Wesson on lap-8. Kopcik was now third with Owen fourth and Ronnie Williams up to fifth.

Kopcik got by Wesson to move into second on lap-10 with Cipriano starting to stretch out his lead ever so slightly. Owen took third from Wesson on lap-14 and as he made his move the two cars touched tires, sending a shower of sparks into the air. Williams followed Owen by Wesson and he took third from Owen on lap-16. The caution came out with 16 laps complete for Ryan Preece, who spun and collected the cars of D.J. Burnham and Tom Bolles.

Cipriano took the lead on the restart but the field could only complete one lap before the caution came back out for a spin by Doug Meservey, Jr. in turn 4 that collected several other cars.

Williams was finally able to get clear of Cipriano on lap-26 just before the caution came out for Matt Vassar, who spun on the frontstretch. The caution came right back out on the restart as several cars, including Arute, Troy Talman, Tyler Hines, and Wood all got into the backstretch wall coming out of turn 2.

Williams took the lead on the restart with Cipriano right behind him. Berndt got a good run in the outside lane and he took second from Cipriano one lap after the restart. Owen was third with Cipriano falling back to fourth in line and Reen was back up to fifth after his earlier spin. The caution came back out with 34 laps complete for spins in turn 3 by Tony Membrino, Jr., Doug Meservey, Jr., and Arute.

Williams took the lead on the restart with Berndt right behind him in second. The field completed 2 laps before the caution came back out for spins at the entrance of turn 1 by Vassar and Michael Christopher, Jr. The restart saw Williams take the lead but Berndt got loose in turn 4 which touched off a multicar incident that collected Rowan Pennink, Cipriano, and several others to bring the caution back out.

Reen took the lead from Williams on the restart but Williams came back and had the lead by a nose at the line as they completed lap-38. The two cars were side by side again as they took the white flag. Williams cleared Reen in turns 1+2 but Reen came back for one final run in turns 3+4 but came up just short as Williams took down his first win of the 2018 season. Dan Avery finished third with Michael Gervais, Jr. fourth and Matt Galko fifth. 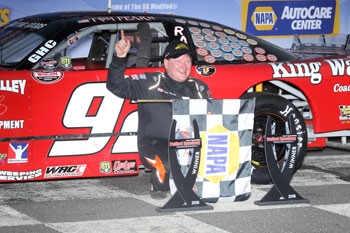 In the 30-lap Late Model feature event, Chase Cook took the early lead with Tyler Leary right behind him in second. Leary was applying heavy pressure right from the drop of the green while Darrell Keane was third, Michael Wray was fourth and Tom Fearn was quickly up to fifth in the opening laps.

Fearn went by Wray to take fourth on lap-5 while Leary was still looking for a way around Cook for the lead. Leary was able to make a move in turn 3 on lap-6 to take over the lead and his move opened the door for Keane, Fearn, Wray, and Glen Reen to all move by and drop Cook back to seventh. Cook continued to slide backwards as Al Saunders, Paul Arute, Kevin Gambacorta, and Cliff Saunders all got by him to drop him back to ninth in the running order.

Fearn got around Keane to take second and he slowly began to eat into the margin that Leary had built up. Leary’s lead was erased permanently by the caution flag with 14 laps complete for a spin by Glen Reen.

Leary took the lead back under green with Fearn glued to his back bumper. Keane was third with Wray fourth and Gambacorta fifth. Fearn was able to make a move to the inside of Leary in turn 1 on lap-19 to take over the lead with Keane, Wray, and Gambacorta still making up the remainder of the top-5. The caution came out with 21 laps complete for Cook, who spun on the backstretch coming out of turn 2.

Fearn took the lead on the restart and he immediately began to stretch out his lead. Gambacorta moved up to second with Paul Arute and Keane side by side for third. Arute took third on lap-25 with Wray following Arute by Keane to move up to fourth and drop Keane back to fifth. Gambacorta closed in on Fearn but he couldn’t get close enough to make a move as Fearn took down his fourth consecutive win of the 2018 season. Arute finished third with Wray and Keane rounding out the top-5. 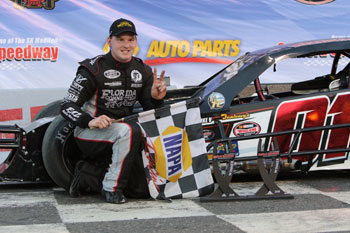 In the 20-lap SK Light feature event, Glenn Griswold took the lead at the green but the caution came out with 1 lap complete for a spin in turn 4 by Todd Clark.

The restart saw Norm Sears and Andrew Molleur go through the grass to bring the caution right back out. The next restart saw Griswold take the lead with George Nocera, Jr. in second and Mark Bakaj in third. Nocera took the lead from Griswold on lap-4 and Bakaj pulled alongside Griswold for second. Bryan Narducci was fourth behind the side by side duo of Bakaj and Griswold with Wesley Prucker holding fifth.

Bakaj was finally able to get clear of Griswold on lap-9 and Griswold got loose in turn 2 on lap-10 to slice back to fourth Bakaj took the lead from Nocera on lap-10 and Narducci took second to drop Nocera back to third in line with Griswold still fourth and Marcello Rufrano was up to fifth.

Narducci took the lead from Bakaj on lap-13 and the caution came out with 16 laps complete for a spin by Rufrano in turn 2.

Narducci took the lead on the restart with Bakaj right behind him in second. Griswold was third with Nocera and Teddy Hodgdon dueling side by side for fourth. Bakaj made one last run but he came up just short at the line as Narducci took his second win of the 2018 season. Griswold finished third with Hodgdon edging out Nocera for fourth at the stripe. 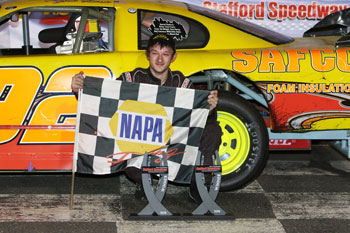 Lavoie took second from Patnode on lap-6 with Ryan Fearn taking fifth and Duane Provost moving into sixth as Clement slid back to seventh. Lavoie was slowly reeling Alexandra Fearn in for the lead with Patnode still third with Surdell, Ryan Fearn, and Provost giving chase.

The next restart saw Ryan Fearn get a good run to the outside of Surdell to take the lead with Alexandra Fearn back up to third. Clement was fourth and Marchese was fifth. Alexandra Fearn was applying heavy pressure to Surdell but Surdell was able to fend off the challenge for second. Marchese spun in the middle of turns 1+2 to bring the caution out with 16 laps complete.

Ryan Fearn took the lead on the restart with Alexandra Fearn taking second. Surdell slotted into line in third with Clement fourth and Lavoie fifth. Alexandra was looking high and low for a way around her brother for the lead and the win but Ryan held her off to pick up his second win of the 2018 season. Surdell finished third with Lavoie and Clement rounding out the top-5. 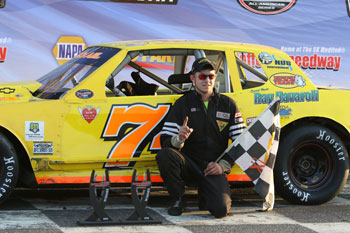 In the 20-lap Street Stock feature event, Chuck Harrison took the lead at the green flag with Brandon Michael moving up to second. Meg Fuller quickly took third with Richard Ciriello slotting into fourth and Travis Hydar in fifth.   Michael took the lead from Harrison on lap-2 and the caution came out with 2 laps complete for a multi car crash in turn 2 that involved the cars of Nick Bendiak, Hydar, Chris Bagnall, Vince Gambacorta, Nicole Chambrello, and Michael Beyer.

Bendiak came to a stop in the middle of turns 1+2 on the restart to bring the caution right back out. The next restart saw Michael maintain the lead with Fuller taking second. George Bessette, Jr. was up to third with Harrison and Trace Beyer dueling for fourth. Beyer and Harrison touched on the frontstretch with Beyer doing a quick 360 spin and rejoining the action as the race stayed green.

Michael had the lead with Fuller and Bessette lined up behind him with 7 laps complete. Greg Demone was fourth with Harrison holding down fifth position. The caution came back out with 10 laps compete for a spin in turn 2 by Devin Pitcher.

Michael again took the lead on the restart with Bessette and Fuller side by side for second. They ran side by side for a lap before Fuller got clear into second on lap-12. Demone was still fourth with Vince Gambacorta back up to fifth after being involved in the early race melee.   The caution came back out with 16 laps complete for Samantha Anderson, who spun coming out of turn 4.

Gambacorta went around on the restart in turn 1 and collected Trace Beyer, Chambrello, Ciriello, Jason Lafayette, Harrison and several other cars to bring the caution right back out.

Michael took the lead back under green with Bessette and Fuller side by side for second. Demone was fourth with Hydar right on his bumper in fifth. Bessette and Fuller ran side by side until the final lap when Fuller got loose in turn 2, which allowed Bessette to take the position. Michael led Besstte to the checkered flag to pick up his first win of the 2018 season. Demone crashed in turn 4 coming to the checkered flag and Hydar was penalized to the last car on the lead lap for making contact with Demone. Fuller finished third with Chambrello and Gambacorta rounding out the top-5.