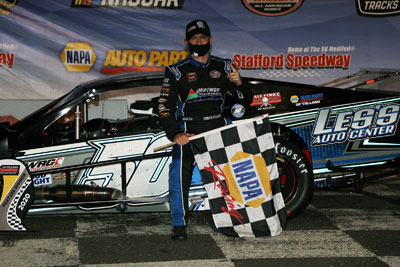 The race took the green flag with Ryan Preece going from third to the lead in a 3-wide move around Michael Christopher, Jr. and Cam McDermott on the first lap.  Christopher nearly took the lead back from Preece on lap-2 but settled into line in second.  Chase Dowling quickly moved up to third with Joey Cipriano in fourth and McDermott side by side with Matt Swanson for fifth place.

With 25 laps complete Christopher and Dowling were still nose to tail for the race lead with Williams and Preece giving chase.  Cipriano was still running fifth and he was leading a train of cars that included Swanson, McDermott, and Jon McKennedy.

At the halfway point of the race it was still Christopher in command with Williams now in second.  Preece was still in third with Dowling back to fourth and Cipriano still running in fifth.  Just behind Cipriano was McKennedy, Swanson, and McDermott.   The first caution of the race came out with 47 laps complete for Dana DiMatteo, who spun at the entrance of turn 3.

Under the caution all the lead lap cars came to pit road for a change of 2 tires.  McKennedy won the race off pit road followed by Christopher, Eric Goodale, Preece, Keith Rocco, Cipriano, Owen, Dowling, Swanson, and Matt Galko.  McKennedy took the lead on the restart while Christopher didn’t come up speed right away and he fell back to fifth as Goodale took second, Rocco third, and Preece fourth.  Rocco took second from Goodale while Christopher came back and took fourth from Preece on lap-50 and he was looking to the outside of Goodale for third.  Christopher made the move around Goodale on lap-52 and Preece followed suit and went around Goodale to move into fourth and drop Goodale back to fifth in line.

Christopher’s great run came to a premature end on lap-58 as his car dropped off the pace and he pulled behind the pit wall.  McKennedy was still the leader with Rocco, Preece, Goodale, Cipriano, Williams, and Galko giving chase.  Williams took fourth on lap-61 with Galko moving up to fifth as Goodale slid back to seventh behind Galko with McKennedy still leading Rocco and Preece.  Debris on the race track brought the caution back out with 66 laps complete.

McKennedy took the lead back under green with Rocco glued to his back bumper.  Williams got around Rocco to take second on lap-68 and he took the lead from McKennedy on lap-69 but McKennedy came right back with a crossover move and he maintained the lead.  Rocco was third in line with Preece fourth and Galko in fifth.

McKennedy threw a block on Williams on lap-75 but Williams somehow found a way to squeeze to the inside of McKennedy in turn 3 to take the lead.  There would be no crossover move from McKennedy this time as he settled into second.  Rocco was still third with Preece and Galko making up the top-5.

Williams led McKennedy to the checkered flag to win the Lincoln Tech Open 80.  Rocco finished third with Preece and Galko rounding out the top-5.