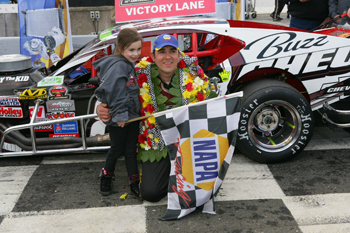 (Stafford Springs, CT)—Whenever a racing driver endures struggles, there is no medicine like a trip back to their home track. Such is the case with Woody Pitkat as he prepares for the 48th Annual NAPA Spring Sizzler®, April 26-28 at Stafford Motor Speedway. Pitkat is second on Stafford’s All-Time Winners List list with 77 career wins across 5 different divisions dating back to 1996. After finishing outside the top-10 in the first two NASCAR Whelen Modified Tour events of the 2019 season, Pitkat recorded his first top-10 of 2019 last Sunday at Thompson. Pitkat is looking to build on that success in the #82 Horton Avenue Materials, LLC., Danny Watts owned car at “The Greatest Race in the History of Spring”.

“We felt like we found something in the rear of the car that was one of the reasons why we ran better at Thompson than in the first 2 races, so we’re gaining confidence,” said Pitkat. “We’ll be in good shape for the Sizzler. At South Boston we went from 26th to 12th and at Thompson we went from 16th to 8th, so we went forward in both races, we completed all the laps, and the car stayed in one piece, so those were all good things. We’re planning on coming to the Sizzler with a new Troyer TA3 car so that could be a good thing or a bad thing. We don’t have an opportunity to test anything so hopefully we won’t have any gremlins. We finished second last August at Stafford and we were in the top-5 at the Sizzler last year before we got spun. If for some reason the new car isn’t ready to go, I feel pretty positive we’ll have a good piece with our old car.” 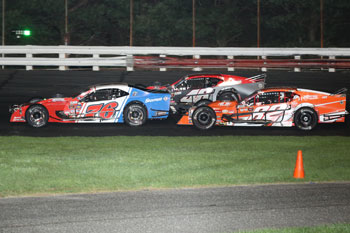 Pitkat’s first career NWMT win came at Stafford in August 2014 in a break-through performance that saw him dominate the 150 lap feature. Woody followed up that 2014 win the following season by winning the 2015 NAPA Spring Sizzler®, arguably the biggest win of his career. The 2015 Sizzler win was Pitkat’s last win on the Whelen Modified Tour.

“Another Sizzler win would be huge,” said Pitkat. “I think it would mean more now because it’s been a while since I last won a race on the Tour. I still have a lot of followers that come to Stafford and think the Sizzler is the biggest race on the schedule with the prestige of the race and all the greats who have won the race in the past. It would be an emotional win for sure between Danny only having one Tour win so far as an owner, the struggles we’ve gone through in the last year and a half, not to mention the loss of Teddy [Christopher], who used to drive this car. It would be cool to honor Ted with winning the Sizzler because this was his car and he’d probably still be driving this car today if he was here. I’ve had some big wins before but with all those factors plus Stafford is my home track, I would say another Sizzler win would be the biggest win of my career and would make for a really cool day.”

In order for Pitkat to pick up his second NAPA Spring Sizzler® victory, he and his #82 team will have to come up with the correct pit strategy. The Sizzler is one of the longest events of the season at 200 laps. This requires nearly all teams to pit for fuel in addition to multiple tire change stops throughout the race. Teams are only allowed to change one tire per pit stop and 3 men over the wall, a rule implemented to reduce the number of pit crew members required for the event. 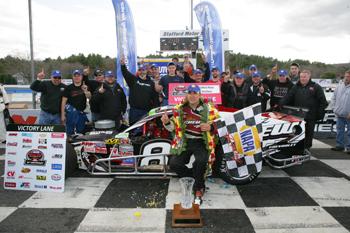 “It’s definitely a pit strategy race now,” said Pitkat. “The year I won the Sizzler I think we could still change as many tires as we wanted on a stop, we just couldn’t do tires and gas at the same time. Now you have to see if you want to get gas early and take tires later or vice versa and you have to see how much time you have under a caution period to decide if you want to change one, two, or three tires. I’m sure whatever plans that teams come up with going into the race changes during the race because of when the caution flags fall, how the race is playing out, how well your car is handling, and things like that. It’s definitely a lot to have on your mind.”

Normally the first step towards winning any race is to get a good starting position with a solid qualifying lap. The numbers at Stafford back that up as in the 19 NAPA Spring Sizzlers® held since 2000, the winner has come from the top-9 positions 15 times. The other 4 races were won from outside the top-20 and Pitkat was a crew member for one of those races that Doug Coby won from 29th. 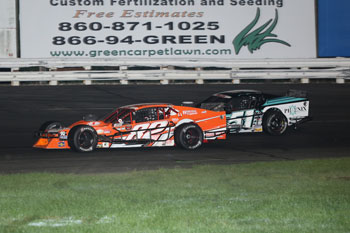 “If there was one race where you could take a mulligan in qualifying, it would be the Sizzler,” said Pitkat. “With everyone having different pit strategies and the race being 200 laps instead of 150, don’t get me wrong, everyone wants to be in the top-5 of top-10, but with the extra 50 laps you could have a bad lap in qualifying and still find your way to the front. I remember the year that I was a jackman for Doug Coby, he took provisional and he won the race. Granted pit strategy is a little different now compared to then, but the Sizzler is a race where you could have a bad qualifying and still win the race.”