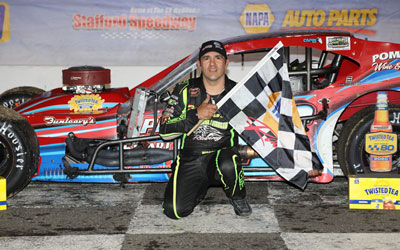 Chase Dowling took the lead at the green with Keith Rocco in second.  Woody Pitkat was third in the early laps with Mike Willis, Jr. coming up to fourth and Ronnie Williams fifth.  Rocco went by Dowling to take over the lead on lap-5 while Craig Lutz went by both Williams and Willis to move into fourth.  Williams got back by Willis to retake fourth place on lap-12 as Rocco continued to set the pace with Dowling and Pitkat behind him.

Pitkat took to the outside lane on lap-17 and he went by Dowling to move into second.  The top-6 cars were lined up in a nose to tail train with Todd Owen in sixth behind Rocco, Pitkat, Dowling, Williams, and Lutz.  Owen was starting to charge to the front as he took fifth from Williams and fourth from Lutz on lap-22.  Williams was starting to fade backwards as Willis, Stephen Kopcik, and Matt Swanson all went by to drop Williams back to ninth in line.  Dylan Kopec brought the caution out with 29 laps complete with a spin in turn 4.

Jeff Gallup spun in turn 1 and Dana DiMatteo spun in the middle of turns 1+2 on the restart to bring the caution right back out.  Rocco chose to restart in the outside lane and Pitkat took the lead on the restart.  Rocco came right back the next lap with a crossover move going into turn 3 and he retook the lead with Pitkat slotting back into second.  Lutz was third followed by Swanson, Dowling, and Kopcik.  Lutz got around Pitkat to take second on lap-34 as Rocco  continued to hold the lead.  Lutz and Rocco touched in turn 3 on lap-37 with Rocco spinning to bring the caution out.  Lutz was sent to the rear of the field for the contact with Rocco.

Under the caution, the majority of the lead lap cars all came to pit road for 2 fresh tires.  Joey Cipriano won the race off pit road and he restarted in 9th as it was Kopcik and Owen on the front row with Matt Galko and Richard Savary lined up behind them for the restart.

Kopcik took the lead on the restart but Galko powered his way to the lead by the time the leaders hit the start/finish line.  Owen was third behind Kopcik with Willis in fourth and Savary in fifth.  Owen quickly took second and on lap-42 he took the lead from Galko.  Willis was third in line behind Owen and Galko with Cipriano in fourth and Cam McDermott in fifth.  Pitkat was back up to sixth, the first car in line that stopped for 2 fresh tires under the last caution period.

With 22 laps to go, Owen was still in command of the race with Galko holding back a hard charging Pitkat for second.  Pitkat was finally able to make a pass stick and he took over second place on lap-60.  Galko now had Williams all over his back bumper in the fight for third place with McDermott still running in fifth.  The caution came back out with 63 laps complete for a spin through the backstretch grass by Dylan Kopec.

Pitkat took the lead from Owen on the restart but Swanson got into the turn 4 wall to bring the caution back out before a lap could be completed, which put Owen back in the lead for the next restart.  Pitkat again took the lead from Owen on the restart with Williams also getting by Owen to take second.  Owen slotted into third with Cipriano in fourth and Galko in fifth.  A spin by Rocco in turn 2 brought the caution back out with 65 laps complete.

Williams powered his way by Pitkat on the restart to take over the race lead.  Owen and Cipriano were side by side for third with McDermott in fifth.  Owen cleared Cipriano on lap-68 for third while Williams was starting to stretch out his advantage over Pitkat at the front of the pack.

Pitkat came back and charged his way back into the lead on lap-72 with Owen third, Cipriano fourth, and Lutz fifth.  The caution came back out with 73 laps complete for a spin by Savary in turn 2.

Pitkat charged into the lead on the restart but behind him the cars of Anthony Flannery, Kopec, and Gervais all spun in turn 1 to bring the caution back out and eliminate Pitkat’s pass for the lead.

Pitkat again took the lead back under green with Cipriano working his way into second.  Galko was third but he lost third to Swanson on lap-75 and Owen was fifth.  Williams had fallen back to sixth but he spun in turn 2 to bring the caution back out with 75 laps complete.

Pitkat took the lead and Galko shot into second on the restart, with Lutz taking third.  Swanson took fourth and Owen got around Cipriano on lap-77 to move into fifth.  Swanson spun in turn 2 to bring the caution back out with 77 laps complete.

Galko got loose on the restart and fell back to fourth as Pitkat took the lead and Eric Goodale and Cipriano were side by side for second.  Goodale got clear as the cars came to the white flag.  Goodale made one last charge on the final lap but Pitkat was just strong enough to hold him off to win the Twisted Tea Open 80.  Cipriano finished third with Galko and Rocco rounding out the top-5.