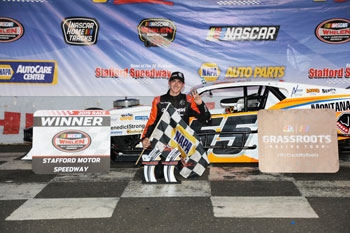 (Stafford Springs, CT)—If there was a theme for the 2019 SK Light season at Stafford Speedway, it would be a youth movement. Of the top-5 drivers in the current SK Light standings, the oldest driver is Noah Korner at 21 years old and the average age of the top-5 drivers consisting of Teddy Hodgdon, Steven Chapman, Alexander Pearl, Korner, and Mikey Flynn is 18 years old. Of those top-5 drivers, only Korner is not a graduate of the Wild Thing Karts program that races at Stafford on Monday nights.

In addition to the youth movement taking over the SK Light ranks this season, there has been a wide variety of drivers to lead the SK Light points standings this season. The season kicked off with Bryan Narducci and the #01 The Florida Connection team winning before his cousin Alexander Pearl steered his #7 Darling Auto Parts car to NAPA Victory Lane to lead the standings in week 2. Pearl would give way the following week to Mark Bakaj and the #76 RH2Way Radio Communications team with Noah Korner and the #31 Midstate Site Development team taking the point lead following their win in the May 24 Dunleavy’s Truck & Trailer Repair Modifiedz Night 40-lap extra distance feature event. SK Light rookie Steven Chapman took over the point lead following the May 31 feature with his #14 Chapman Apartment Homes car before Hodgdon moved his #55 Montanari Fuel machine to the top of the standings after the June 7 feature event. With the SK Light points lead changing hands after each of the first 6 races, Hodgdon has maintained the point lead since he first took it over and he heads into the July 19 feature with a 36 point lead over Chapman. 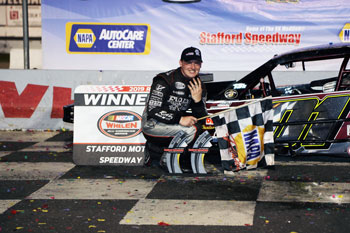 One driver to keep an eye on during the second half of the 2019 season will be Narducci and the #01 team. They lead all drivers with 4 wins this season, including the last 2 in a row heading into this Friday night’s July 19 Girls Night Out & Intrepid Fallen Heroes Fund Track Walk feature event. Narducci has four finishes outside the top-20 this season, which has him 10th in the standings, 114 points behind Hodgdon.

There have been 5 different feature winners this season in the SK Lights. Narducci leads all drivers with 4 wins, while Hodgdon, Korner, and Pearl have each won twice and Bakaj has one win thus far in 2019. Past SK Light feature winners who have yet to win in 2019 include Bob Charland in the #1 Charland Motorsports car, Joey Ferrigno in the #87 RH2Way Radio Communications car, Chris Matthews in the #29 Carter Chevrolet car, and Wesley Prucker in the #22 Accu-Rite Tool & Mfg. car. 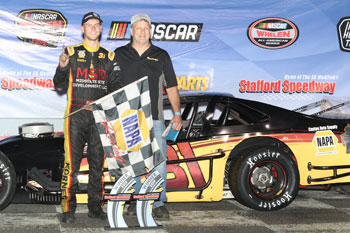 The race for the R.A.D. Auto Machine SK Light Rookie of the Year award sees Wild Thing Karts graduate Steven Chapman leading the way by 16 points over Korner with Nick Anglace and the #10 Fox Pest Control team third in the rookie standings, 72 points behind. Korner has 2 wins thus far during his rookie season while Chapman has been close to reaching NAPA Victory Lane with a pair of podium finishes and Anglace also has a second place finish on his record.

With such parity at the top of the SK Light standings throughout the first 11 races of the 2019 season the question will be can Hodgdon continue to maintain his points lead or will other drivers once again take turns swapping the point lead amongst themselves.