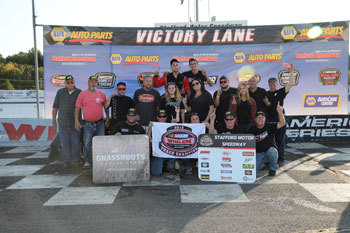 (Stafford Springs, CT)—Zack Robinson came into the 2019 Street Stock season at Stafford Speedway behind the wheel of a new car with a new team. Robinson was undeterred by the fact that he was driving a new car for a new team. He and the #89 RSMPCO.com / First Class Automotive team owned by Bill Anderson quickly showed that they had championship potential by winning their third race together and three of the first 7 races of the 2019 season. Robinson gained the points lead midway through the 2019 season and remained on top until the end of the year to claim his first track championship.

“It definitely feels good to win the championship,” said Robinson. “We were this close in 2017 and we had some mishaps, which was my own fault. We moved on from that and we came into this year with our heads held high for a new season. The Anderson family came to us over the winter and asked us if we could help fix their car. We went through a couple of things and we decided we would build a brand new car from scratch. We started with a bare frame from the side of my garage, we went to Joe Hamm for a roll cage, and then we did the rest of the car ourselves. We finished fourth in the first race of the season and we thought that was pretty good for a new car. The plan was to win as many races as we could and when we started clicking them off four or five weeks into the season we decided we were going to stick it out and see where we could go with it.” 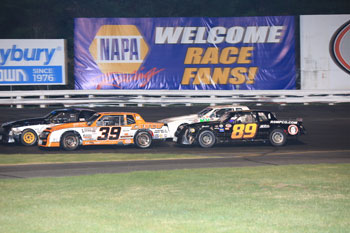 Where Robinson and the #89 team went with their early season success was an almost permanent place in the top-5 every Friday night during the Street Stock feature events. After opening the year with a fourth place finish, Robinson finished the second race in 18th place, That 18th place finish on May 11 would turn out to be the only race of the 2019 season that saw Robinson finish lower than 7th. Robinson closed out the year with 5 wins, 16 top-5, and 19 top-10 finishes.

“Coming into the season our goal was to win the most races and I think we got that done,” said Robinson. “First of all I have to thank the Anderson family for giving me the opportunity to drive this car. Joe Brockett, he’s the one behind this car and he made it happen every week and got the car to the front for us. Ryan Churchill, his father, his whole family, my stepdad, my mom, my father, my grandparents, everyone that’s involved with this car, thanks to Jeff, Tick Mike, and all the sponsors. First Class Automotive, Jason with Royal Screw Manufacturing, Jet Electric, JSB, Hopkins Construction, Swanson Buick-GMC, Defenders of Charity, and everybody who’s involved with this car.” 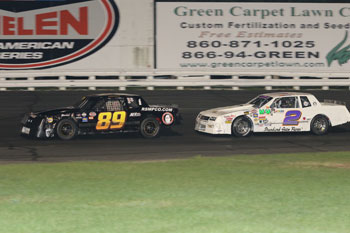 Robinson’s victory on July 12 moved him into the Street Stock point lead for the first time. From there, Robinson slowly built his lead up to where he came into the NAPA Fall Final with a comfortable 30-point margin over Meghan Fuller. Robinson recorded a third place finish at the NAPA Fall Final, which was his 12th podium finish of the season in 20 starts and he claimed the championship by a final margin of 26 points over Fuller.

“My plan from the start of the last race was to do what we had been doing all year and that was to go for the win,” said Robinson. “The car started to fall off a little bit and I was kind of happy that we didn’t get a late caution flag. This is a great accomplishment and I’m proud of the whole team.”

Now that Robinson has claimed his first championship at Stafford, his plans for 2020 season are yet to be determined..

“Right now our plans are up in the air at the moment,” said Robinson. “We were thinking about possibly going to the Late Model division next season but now that we’ve won the championship, we might have to come back to try to defend it.”

Robinson will officially be crowned the 2019 Street Stock Champion at the 50th Annual Stafford Speedway Champion’s Awards Banquet, scheduled for Friday, November 15 at Maneeley’s in South Windsor. Tickets to the awards banquet are $50 and are on sale now. Tickets can be ordered by calling the track at 860-684-2783 or they can be ordered online at www.staffordspeedway.com.