(Stafford Springs, CT)—Stafford Speedway hosted its final Friday night race program of the 2021 season with NAPA Auto Parts Championship Night on October 1.  Taking down feature wins on the night were David Arute in the SK Modified® feature, Adam Gray in the Late Model feature, Tyler Barry in the SK Light feature, Jeremy Lavoie in the Limited Late Model feature, and Travis Hydar in the Street Stock feature.  With NAPA Championship Night serving as the final race of the 2021 season, track championships were clinched by Michael Bennett in Late Model division, Derek Debbis in the SK Light division, Alexandra Fearn in the Limited Late Model feature, and Frank L’Etoile, Jr. in the Street Stock division.  Todd Owen clinched the SK Modified® championship a week ago and he celebrated his championship in NAPA Victory Lane along with the other four track champions. 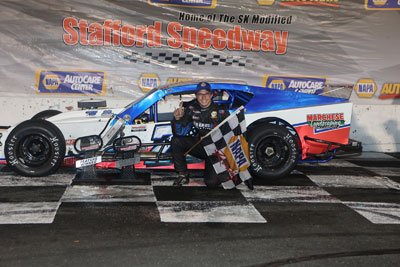 In the 40-lap SK Modified® feature, Matt Vassar charged into the lead at the drop of the green flag with Marcello Rufrano holding second.  Teddy Hodgdon slotted into third with Tyler Hines in fourth and Noah Korner and Michael Christopher, Jr. side by side for fifth.  With 3 laps complete, Todd Owen and Bryan Narducci came together and spun, collecting the cars of Stephen Kopcik and Mikey Flynn to bring the caution out.  Owen was able to continue at the rear of the field while Kopcik, Narducci, and Flynn were all finished for the night.

Vassar again took the lead with Rufrano, Hodgdon, Korner, and David Arute making up the top-5.  Owen returned to pit road on lap-8 and he retired from the race.  With 15 laps complete, Vassar was still in front with Hodgdon, Korner, Arute, and Rufrano lined up behind him.  Hines was sixth followed by Keith Rocco, Dylan Kopec, Christopher, and Michael Gervais, Jr. 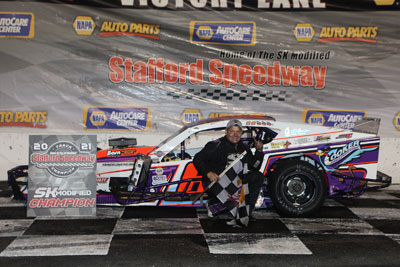 With 10 laps to go, Vassar was still in command of the race with Hodgdon, Korner, Arute, and Rufrano still giving chase.  Hodgdon was closing down the gap to Vassar and with 5 laps to go, he was right on Vassar’s back bumper.  Korner and Arute were also closing in on the lead duo to make it a 4-car train for the lead and the win.  Hodgdon was abel to make a move to the inside of Vassar in turn 1 on lap-38 to take over the lead but Vassar came back to the inside of Hodgdon in turn 3 with a crossover move and the two cars touched with Hodgdon going around to bring the caution out and set up a green white checkered finish.  Vassar was sent to the rear of the field by Stafford officials for making contact with Hodgdon.  This put Korner and Arute on the front row with Christopher and Rufrano in row 2 for the restart.

Korner took the lead but as the field came to the white flag, several cars got together in turn 3 including Cory DiMatteo, Troy Talman, Dan Wesson, Jon Puleo, and P.J. Peters to bring the caution back out.  The next restart saw Arute take the lead by a nose at the line as the field took the white flag.  Arute and Korner raced side by side over the final lap and they touched coming out of turn 4 to the checkered flag with Arute edging Korner out by a nose to record his first SK Modified® points paying feature win after winning the TC 13 Shoot Out on September 10.  Rufrano finished third with Christopher fourth and Hines rounding out the top-5. 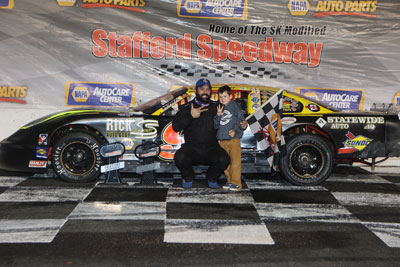 In the 30-lap Late Model feature, Darrell Keane and Marc Curtis got hooked together and came to a stop against the backstretch wall to bring the caution out before the first lap could be completed.  Back under green, Paul Varricchio, Jr. took the lead with Michael Wray taking second from Zack Robinson.  Andrew Molleur was fourth with Michael Bennett in fifth place.  Wray took the lead from Varricchio on lap-2 while lap-4 saw Robinson get to the inside of Varricchio to take second.  Robinson’s move opened the door for Molleur to follow him past Varricchio to move into third and drop Varricchio back to fourth.  Kevin Gambacorta was now fifth with Tom Fearn in sixth as Bennett fell back to seventh in line.

Gambacorta moved into fourth place on lap-7 and he brought Fearn with him into fifth as Varricchio fell back to sixth while Wray continued to hold the lead with Robinson in second and Molleur in third.  Molleur made a move to the inside of Robinson on lap-9 to move into second.  Gambacorta followed him past to take third and drop Robinson from second back to fourth place.  Tom Fearn went by Robinson on lap-11 to move into fourth and Bennett took fifth as Robinson slid back to sixth.  Adam Gray was on the charge and he took sixth place from Robinson on lap-16 just before John Blake spun along with Varricchio and Mike Mordino with Andrew Durand and Rob Dow also involved to bring the caution out and erase the large lead that Wray had built up. 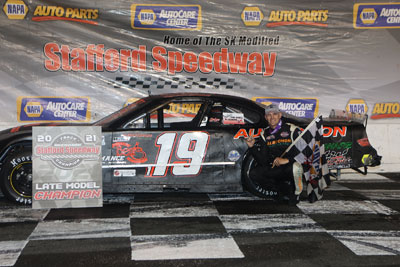 Wray took the lead on the restart with Molleur taking second.  Gray charged his way into third with Gambcorta fourth, Tom Fearn fifth, and Bennett in sixth.  Gray took second on lap-19 and he made a move to the inside of Wray on lap-20 to take over.  Fearn came to a stop in turn 4 with a flat tire to bring the caution back out with 20 laps complete and slow the  field after Molleur was looking to take the lead from Gray with Gambacorta and Wray right behind the lead duo.

Molleur stayed side by side with Gray for a lap before Gray got clear to the lead on the restart.  Gambacorta got by Molleur to take second on lap-22 with Bennett getting by Wray to move into fourth place.  Bennett was able to get by Molleur and take third place on lap-28, which was the spot he needed to be in to clinch the championship.  Gambacorta made one last effort to get by Gray on the final lap but Gray was able to hold him off to pick up his third win of the 2021 season.  Bennett finished third with Molleur and Michael Wray rounding out the top-5.  Bennett’s third place finish left him tied with Gray in the race for the championship with Bennett holding the tiebreaker by virtue of his 5 wins to Gray’s 3 wins to become the 2021 Late Model champion. 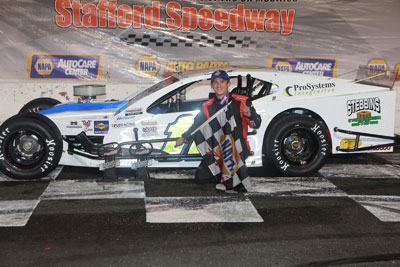 In the 20-lap SK Light feature, Amanda West led the field to the green and she led the first lap but Tyler Barry was on her inside and he powered his way into the lead by a nose on lap-2.  Bob Charland nearly made a 3-wide move for the lead on lap-3 but he backed out of the move and fell back into a side by side duel with West for second as Barry took the lead.  Just behind West and Charland was Meghan Fuller and Tyler Chapman.  Championship contenders Brian Sullivan and Alexander Pearl were side by side for sixth place with the other championship contender Derek Debbis right behind them in eighth place. 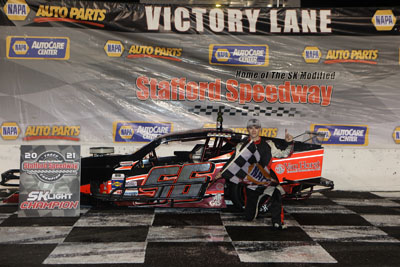 Barry began to pull away from Charland in second while Tyler Chapman was third with his brother Steven Chapman in fourth.  Sullivan worked his way back into fifth place with Debbis in sixth and Pearl slid back to seventh after challenging for third several laps earlier.  Debbis took fourth from Sullivan on lap-16 to move into championship position with Sullivan and Pearl right behind him in fifth and sixth place while Barry was still in front with Charland and the Chapman brothers giving chase.

Barry took down his first career SK Light feature win with Charland, Tyler Chapman, and Steven Chapman making up the top-4.  Following post-race inspection, Steven Chapman’s car was found to be 2 pounds underweight and he was penalized two positions back to sixth place.  This promoted Debbis to fourth place and Sullivan to fifth place.  Debbis and Sullivan ended up tied in the SK Light standings but Debbis held the tiebreaker with 7 wins to Sullivan’s 4 wins to lay claim to the 2021 SK Light championship. 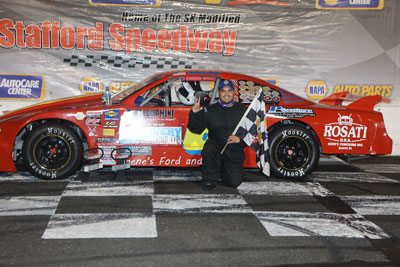 In the 20-lap Limited Late Model feature, Gary Patnode challenged Damian Palardy for the lead at the start of the race but he got into the backstretch wall on the opening lap and he limped his way back to pit road, done for the evening.  Palardy took the early lead with Mike Hopkins quickly working his way up to second place.  Jeremy Lavoie was third followed by Devon Jencik and Matt Clement.  Alexandra Fearn was also on the move in the early laps, working her way up to sixth by lap-4 and she was in fifth place behind Jencik on lap-7 with Hopkins still holding the lead.  Lavoie was now second with Jencik third and Palardy fourth. 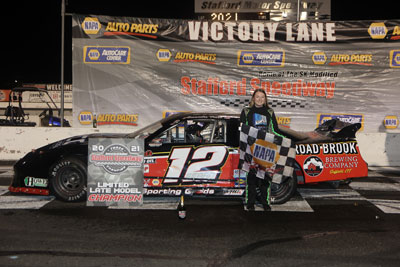 maintain the position.  Hammann kept the pressure up and he was finally able to get by Fearn on lap-13 to move into fifth place.  At the front of the field, Lavoie was all over the back bumper of Hopkins looking for a way to take over the lead.

Lavoie and Hopkins touched as they raced through turn 4 to complete lap-16 and Lavoie was able to get by Hopkins to move into the lead on lap-17.  Hammann got by Jencik to move into third place on lap-18 while Hopkins was looking to get back by Lavoie for the lead.

Hopkins was unable to make a move as Lavoie took down his second win of the 2021 season.  Jencik got back by Hammann for third at the line with Palardy rounding out the top-5.  Alexandra Fearn finished sixth, which was good enough to make her the 2021 Limited Late Model track champion. 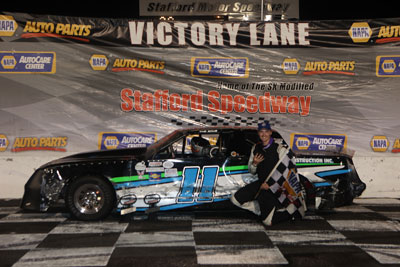 In the 20-lap Street Stock feature, Christopher Phelps spun in turn 1 at the start of the race, which collected the car of Jeremy Washburn and brought the caution flag out.  Marvin Minkler took  the lead on the second start with Nickolas Hovey going around Daltin McCarthy for second on lap-2.  McCarthy spun in turn 2 which collected the car of Bill Cote to bring the caution flag back out.

Hovey took the lead from Minkler on the restart with Travis Downey and Travis Hydar going side by side for third.  Hydar went by both Downey and Minkler to move into second on lap-4 and Chris Meyer followed him through to take third.  Meyer then took second from 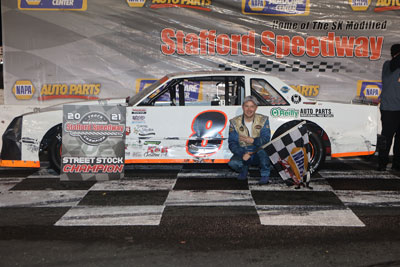 Hydar on lap-5 while Downey was fourth and Bert Ouellette was up to fifth.

Hydar went by Meyer on lap-9 to move into second with Ouellette taking fourth and Adrien Paradis, III fifth as Downey slid back to seventh, just behind Frank L’Etoile, Jr. in sixth.  With 5 laps to go, Hovey was still in command with Hydar closing in from second.  Meyer was third in line followed by Ouellette, Paradis, and L’Etoile.

Hydar made his move to the inside of Hovey on lap-18 coming out of turn 4 to move into the lead.  Hydar led Hovey to the checkered flag to pick up his fourth win of the 2021 season.  Meyer finished third with Paradis and Ouellette rounding out the top-5.  L’Etoile finished sixth, which made him the 2021 Street Stock champion.