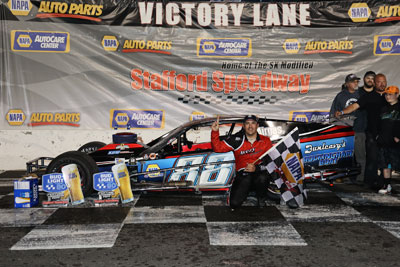 (Stafford Springs, CT)—Open Modified cars returned to Stafford Motor Speedway for their third of five visits of the 2022 season on Friday, June 10th for the Bud Light Open 80.  Woody Pitkat led the final 13 laps to come home the winner after Ronnie Williams and Ronnie Silk made contact while racing for the lead and had to restart from the rear of the field.

Chase Dowling took the lead at the start of the race with polesitter Ronnie Williams slotting into second.  Williams didn’t spend long in second as he dove to the inside of Dowling on lap-2 and went back to the front.  Ronnie Silk was third in the early going with Woody Pitkat and Matt Galko making up the top-5.  Ryan Preece moved from 10th to sixth in the early laps with Michael Christopher, Jr., Marcello Rufrano, Stephen Kopcik, and Anthony Flannery making up the top-10.  Silk took second from Dowling on lap-6 and he was looking for a way around Williams for the lead when the caution flew with 7 laps complete for a spin in turn 2 involving the cars of Dave Salzarulo, Eric Goodale, and Robert Bloxsom, III.

Silk took command of the race on the restart with Williams right behind him in second.  Pitkat took second from Williams on lap-11 with Preece up to fourth and Dowling back to fifth.  The caution came back out with 13 laps for a spin coming out of turn 4 by Matt Swanson.

Silk resumed his place at the front of the field back under green with Pitkat, Williams, Preece, and Dowling lined up behind him.  Galko was sixth followed by Christopher, Kopcik, DiMatteo, and Flannery.  Preece made a move to the inside of Williams on lap-21 to move into third place as Silk continued to hold the race lead with Pitkat in second.

On lap-36, Preece pulled out of line and brought his car down pit road before going behind the wall while the caution came out with 37 laps complete for a spin in turn 2 by Mark Bakaj.  Under the caution the field minus the car of Silk came down pit road for tires and service.  Williams won the race off pit road followed by Goodale, Galko, Chris Pasteryak, Dowling, Cory DiMatteo, Jeff Gallup, Dylan Izzo, Noah Korner, and Kopcik.

Silk powered his way into the lead on the restart with Williams, Dowling, Galko, and Goodale lined up behind him.  The caution came back out with 38 laps complete for a spin in turn 4 by Frank L’Etoile, Jr.

Several cars came together at the rear of the field on the restart with L’Etoile taking a hit into the turn 1 wall while Flannery’s car had damage and briefly caught fire before coming to a stop on the backstretch that brought the yellow and red flags out before a lap could be completed.

Silk took the lead at the restart but by the time the cars came around to complete lap-38, Dowling had take the lead from Silk.  Williams moved into second on lap-40 and Galko took third as Silk fell back to fourth place, just in front of Goodale in fifth.  Williams took the lead from Dowling on lap-42 and with 35 laps to go the running order was Williams, Dowling, Galko, Silk, and Izzo.  The caution came back out with 48 laps complete for debris on the backstretch.  Under this caution, Silk came to pit road for two new tires.

Williams took the lead back under green with Dowling and Galko lined up right behind him.  Christopher and Izzo were side by side for fourth place with Christopher getting clear of Izzo on lap-51.  Galko took second place from Dowling on lap-56 and Christopher followed him by Dowling on lap-57 to move into third and drop Dowling back to fourth.  The caution came back out with 61 laps complete for a spin in turn 1 by Anthony Bello.

The field completed one lap before the caution came back out again for Rufrano, who came to a stop in the frontstretch grass.  On the ensuing restart, Williams took the lead with Galko, Pitkat, Silk, and Izzo behind him.  Silk quickly took third on lap-64 and set his sights on the two leaders.  The caution came back out with 66 laps complete for a multi car spin in turn 4 involving the cars of Noah Korner, Matt Swanson, DiMatteo, and Buddy Charette.

Williams took the lead with Silk, Galko, Izzo, and Pitkat behind him.  The two leaders touched in turn 2 which sent Williams into a 360 degree spin and brought the caution out with 67 laps complete.  Silk was put to the rear of the field for the contact with Williams.  Under the caution, Galko’s car came to a stop at the entrance to turn 3 and had to be pushed back to pit road.  This put Izzo and Pitkat on the front row with Christopher and Pasteryak in the second row for the restart.

Pitkat took the lead with a sideways drift in turn 3 while Izzo was able to keep Christopher from taking second.  Christopher worked his way to the inside of Izzo on lap-69 and took over second place.  Goodale was now fourth with Dowling in fifth.  Dowling took fourth from Goodale on lap-70 and Teddy Hodgdon followed him by to take fifth and drop Goodale back to sixth place.

With 5 laps to go, the order was Pitkat, Christopher, Izzo, Dowling, Hodgdon, Goodale, DiMatteo, Dave Etheridge, Williams, and Silk.  Pitkat led Christopher to the checkered flag to win the Bud Light 80.  Izzo finished third with Dowling and Hodgdon rounding out the top-5.