(Stafford Springs, CT)—While racing in different divisions, SK Light driver Josh Carey and Limited Late Model driver Damian Palardy share similar stories of struggle on their way to their first career Stafford feature victories on Friday, June 3.  Carey came to the SK Light division with the #69 J & J Trucking Chevrolet in 2020 after racing Street Stocks at Monadnock Speedway while Palardy ran 2 races in 2019 before making a full-time move from Wild Thing Karts up to the Limited Late Model division also in 2020 with the #87 Casagrande Builders Chevrolet.  Both drivers struggled through the highs and lows of racing in 2020 and 2021 before scoring their first wins. 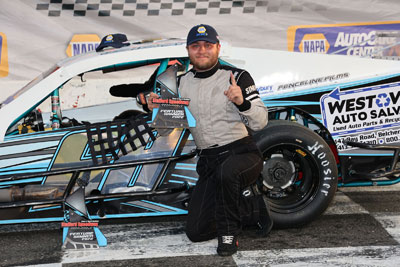 “It felt surreal to win and it’s still taking some time to sink in,” said Carey.  “It was a very tough task over the last 3 years going from Street Stocks up to a modified.  A lot of people told me Stafford was one of the toughest tracks to find success at and we’re a low budget team that worked our tails off for 3 years with a lot of ups and downs.  It all worked out that night with a little luck on our side and with a good car I was able to stay up front and hold off a hard challenge from Tyler Chapman.  It feels really good to finally get it done and now I know that I can do it again and I have to give a big thanks to J & J Trucking, Westover Auto Salvage, Ethan Durocher for his crew help, Joe, R.A.D. Auto Machine, Chassis Pro, Todd Owen, Fenceline Films, Black Flag Podcast, my family, FloRacing, and Stafford for having the most professional track for us to race at.” 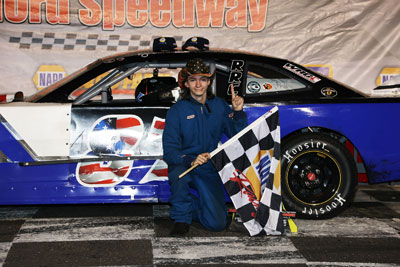 “It all feels very surreal and it’s still hard to believe in all honesty,” said Palardy.  “I never thought I’d get this car to victory lane this quickly.  My last win was back in the kart days which would have been 5 years ago and I figured it would have taken two or three more years to get into victory lane.  Going from karts to the Limited was a huge jump but I think the biggest thing for me was getting a handle on the car and to not be afraid of the track.  My first year, every time I went out, I was afraid of wrecking the car and not being able to race the next week but I realized that the only way to learn is to push the car.  I probably wrecked the car at least once a week in my second season so I learned a lot about what to do and what not to do and this season thanks to Casagrande Builders and Rob Russell Chassis we got a new front and rear clip, a new motor and a new transmission.  The engine I had was 7 years old without a refresh so the new equipment has made a huge difference for us.  Thanks to Casagrande Builders, my father and grandfather for their support, and RRC for giving me the best chassis I could ever have.” 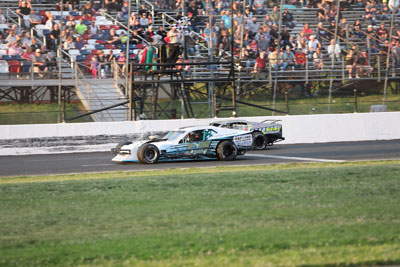 Both Carey and Palardy began to have doubts about winning a race, but through perseverance and hard work, they were able to overcome their shortcomings and enjoy the feeling that comes with winning a race.

“I’ve been in that situation 3 or 4 times before being up front leading a race and I’ve given it away each of those times,” said Carey.  “I knew Tyler [Chapman] had a fast car and when he gave me the bumper with 3 laps to go, I was telling myself that I couldn’t give this one away and this was my race to win.  I took his lane away, we raced really hard, and I was able to get it done.”

“I started feeling down in the middle of last year because although we were finishing in the top-10 every week, we weren’t progressing,” said Palardy.  “I worked on some things I was doing wrong and towards the end of the season we went from the top-10 to the top-6 and almost the top-5.  My confidence has been boosted a lot and now I know what to do and what I’m capable of doing, I just have to focus and master it.”

Carey’s victory was the third feature win in four SK Light races for drivers in Chassis Pro cars that are prepared by Todd Owen and Butch Shea.  Carey joins Derek Debbis and Chris Matthews as Chassis Pro winners this season and he is looking to add to his win total throughout the remainder of the 2022 season.

“Todd’s program that he’s put together the last couple years has really progressed and I think he has the best SK Light program going right now,” said Carey.  “Things are starting to click and there’s a lot of success behind the Chassis Pro team and it feels really good that we’re able to bring some success to the team.  My car is a 2017 car that Todd won races with at Waterford so I was happy to get his old car back into victory lane and hopefully we can keep it rolling now.  It’s really hard to win at Stafford but I’m a big believer in momentum and whenever we’ve had some momentum things have seemed to go really well for us.  I’m certainly looking forward and I believe we can get another win this year.” 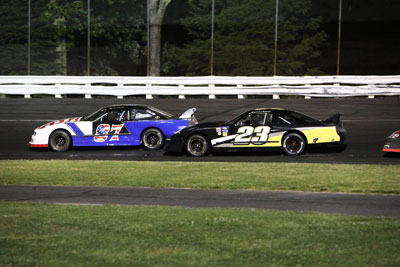 Palardy’s confidence is also through the roof after his first win, but he has tempered his expectations as he has to now learn how to drive a car capable of being a weekly contender for victories

“I think we can win again but I still have a big learning curve because now I have a fast car and not a car that likes to fall on its face so I have to get used to driving a fast car,” said Palardy.  “Now that we’ve won a race I’m also going to have to learn how to get through traffic again starting towards the back but I definitely feel like we can win again.”

Carey’s and Palardy’s first opportunity to capture career win number two will be during the Stafford Weekly Series program scheduled for this Friday, June 17th.  Stafford’s SK Modified®, Late Model, SK Light, Limited Late Model, and Street Stock divisions will all be in feature action.  Tickets for the Weekly Racing program are available now online at StaffordSpeedway.com/tickets and tickets will also be available for purchase at the admission gates.  Tickets are $20.00 for adults, $5.00 for kids 6-14, and free for kids 5 & under.  Reserved seating is priced at $25.00 for all ages and pit passes are $35.00 with a valid 2022 Stafford Competition License and $40.00 without a Stafford license.  If you are unable to attend the event, tune into the live stream on FloRacing, the official streaming partner of Stafford Speedway.